The three-wheeled Aptera 2e , set for fall release, would get equivalent of 200 mpg 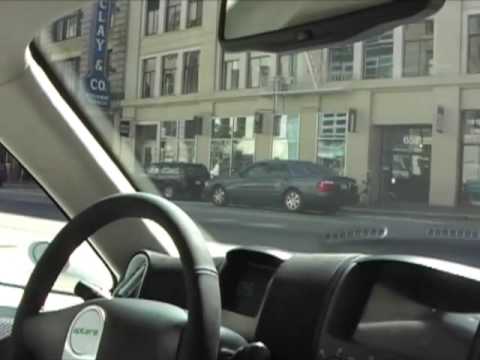 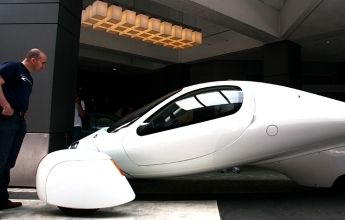 Purring softly through downtown San Francisco, the sleek Aptera 2e looks like a white dolphin, a wingless bird, or the latest Pixar brainchild.

Its two front wheels protrude from the nose like hawk claws, while the lone rear wheel spins beneath the 2e's narrow, horizontal tail as it winds its way through alleyways, past pointing fingers and quizzical faces.

The Aptera, an all-electric two-seater capable of driving 100 miles between recharges, is turning heads as much for its avian appearance as for its energy efficiency. While Gov. Arnold Schwarzenegger and actor Leonardo DiCaprio famously purchased the better-known (and higher priced) Tesla electric car, the Aptera is quickly but quietly amassing its own list of celebrity backers. Actors Robin Williams and Tom Hanks have already expressed interest in getting an Aptera, according to the company, as has the iconic NBA-er, Shaquille O'Neal of the Phoenix Suns. (Aptera officials believe the colossal Shaq may be interested in buying one for a friend or a family member, however.)

Though the Aptera 2e won't be released until this fall, locals will have a chance for a sneak preview Wednesday, when Aptera officials bring the latest prototype to Stanford Shopping Center. But quite a few Bay Area residents have already gotten wind of the new vehicle. The company has received about 4,000 pre-orders from all parts California, said Marques McCammon, the company's chief marketing officer. The areas with the most pre-orders thus far have been San Diego County, where Aptera is based, Los Angeles, and the San Francisco-Silicon Valley area.

The car will only be available in California at first, said Paul Wilbur, the company's president and chief executive officer.

"California gets it," said Wilbur, who worked for Ford and Chrysler in Detroit before heading to Aptera's Vista, Calif., headquarters.

The 2e's bird-like appearance is not a coincidence, Wilbur said. The company tried to make the car "shaped like the wind" by blowing high-speed winds at the prototypes and tinkering with the models to make them more aerodynamic.

Company Founder Steve Fambro is a trained pilot who worked in San Diego's thriving biotech industry before he set his sights on designing an ultra-efficient car with "wingless flight" capabilities, Wilbur said.

"Its aerodynamic form is what makes the car so efficient," said Wilbur, who equated the car's energy-efficiency to getting about 200 miles per gallon.

Wilbur said the company plans to release its hybrid (2h) and gasoline-fueled (2g) models in the middle of 2010. The 2g -- the least fuel efficient of the three -- would get about 100 miles per gallon, Wilbur said.

The Aptera 2e, meanwhile, is scheduled to debut in white later this fall. Other colors, including black, silver and red, would become available next year as production accelerates, McCammon said.

Drivers would be able to recharge the 2e by simply plugging it into a regular electric outlet with an extension cord. A display on the dashboard shows how much battery power is being used and how much power the car has left.

The Aptera 2e will be displayed at Stanford Shopping Center in Palo Alto from 5 to 8 p.m. Wednesday.

Glaring typo in the sub-healine! Come on folks! 200 mpg not mph!
R

I love the car!!!!!! I also wanted to inform you of a typographical error at the 4th paragraph. The word, "to" needs to be before Stanford Shopping Center.

That looks a heck of a lot better than a sewer pipe art structure in a park or in front of the community center.


Report Objectionable Content
Email Town Square Moderator
1 person likes this
Posted by Walter_E_Wallis
a resident of Midtown
on Apr 21, 2009 at 5:15 am


By California law it is a motorcycle, not a car. It reminds me of the Davis.

Report Objectionable Content
Email Town Square Moderator
1 person likes this
Posted by Don G
a resident of Community Center
on Apr 21, 2009 at 9:09 am

Been watching the progress of this car and company for some time since it came out in Popular Science last year. Can't wait to see it in person. It's shape is 5X more aerodynamic than the boxy Prius which helps it become more efficient. When the hybrid comes out, the small gasoline motor will cycle on and off to charge the batteries only thus getting you 1000 mpg (estimated).

Report Objectionable Content
Email Town Square Moderator
1 person likes this
Posted by Don G
a resident of Community Center
on Apr 21, 2009 at 9:14 am

Been watching this since last year when it came out in Popular Science. It's aerodynamic shape has 5X less wind resistance than the boxy Prius and is therefore more efficient. Can't wait for the hybrid version which has a small gasoline motor which will cycle on to charge the batteries thus getting an estimated 1000 mpg. Surprised in the article though about the price. I had read that it would be about $25K or less. $40K is really too high for what you get in this car even though it's built with "green" materials, etc.

Note the Tesla is actually over $120K. And the price range for the Aptera depends of drive train (electric, hybrid or gas) and options (extra large batteries, GPS, etc.)


Way overpriced for a golf cart - motor scooter combo. Let's se what India comes up with.

While technically a motorcycle they (Aptera people) are saying it is designed to be very (or relatively?) safe.

I am busy or otherwise would be there to take a peak.

If it is dependable ala a Honda or Toyota this should catch on. Some people like the whole "Jetson" appearance and others react negatively.

I believe Aptera is also working on a hybrid plug-in which has a longer distance potential. You couldn't get in this one and just drive to LA.

another like option is the "ride the rode" It's an "inline" electric motorcyle which pivots on the front wheel and turns with two people in in-line cockpit. Rear has axle and two wheels. I can't find the link, maybe it's not in planning anymore.

This has "chick magnet" potential also. That probably is worth a lot in sales potential.

Some of you may be interested in the prototype I have under development in the electric car market. Mine has a wind turbine on the roof. A slight push gets the car rolling and the moving air turns the blades. As power is thereby produced, the car can go faster, and thereby generate more power. Although my prototype has only gone up to 100 mph, power production is such that there is no theoretical upper speed limit.
And, of course, no internal combustion power generation is needed.

Furthermore, unlike my earlier attempts at power independence – a car roof made out of solar photo-voltaics, this one works at night. Right now, I’m working to combine the two power sources. With a change of drivers, this car never needs to stop and can keep going infinitely.

I have also developed an accessory for those interested in the S or Sport version. I provide an additional fan that plugs into the cigar lighter and can be held out the window for a major power boost.

These local restaurants are donating meals to Bay Area residents in need. Here's how to help.
By Elena Kadvany | 6 comments | 10,815 views

Coronavirus: Plan ahead now for a big outbreak
By Diana Diamond | 18 comments | 3,892 views

Will the Coronavirus Save Lives?
By Sherry Listgarten | 29 comments | 3,726 views