VIDEO: Music from the heart 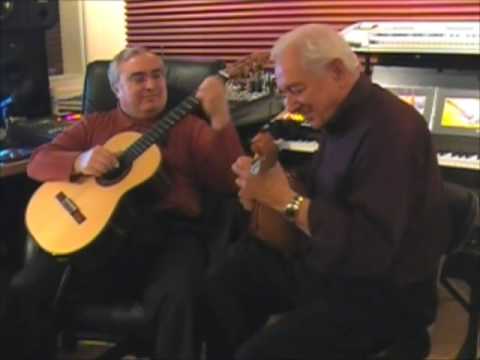 More than flowers or candlelight, music sets the mood for love. Perhaps no one knows that better than Al Fabrizio and Hugo Wainzinger, two local musicians who specialize in romantic tunes.

The two are the founders of Heartstrings Music, a Mountain View-based recording studio. Fabrizio plays the mandolin and Wainzinger the guitar -- in addition to a host of other instruments.

the tremolo capacity of the mandolin makes it especially suited for romantic music because of the emotion is conveys. And Wainzinger's fluid guitar stylings can turn even the heaviest rock song "into the sweetest stuff," Fabrizio said.

The two put out their first recording in the mid 1990s and eventually decided to pursue their music full time. Though they devote considerable time and energy to working in the studio, their primary source of music income is their live performances.

One of their specialties -- not surprising given their romantic sounds and name -- is wedding performances.

"We love weddings," Fabrizio said, adding one reason his and Wainzinger's act is popular is their range in repertoire. The two have knowledge of many types of music -- Italian, Jewish, Latin, Eastern European and more -- making them well suited for the often multi-cultural weddings around the Bay Area.

Their ability to switch seamlessly from classical to classic rock is also a valuable asset, Wainzinger said, breaking into a surprisingly soft rendition of a Metallica song. "Some guys, they love that melody," he said with a grin.

Playing a mix of song styles make sure everyone -- young and old alike -- can relate to and enjoy the music, he said.

Their music has even helped smooth things out at weddings when the bride and groom's families weren't exactly getting along. "Music can save an occasion," Fabrizio said.

Just as their set lists contain an unexpected amount of non-traditional choices, they're open-minded toward where to perform. "We've performed at several gay weddings. We're open to any kind. If anybody wants to get married, we'll give them music," Wainzinger said.

Fabrizio, a New York Native, and Wainzinger, who hails from Argentina, have been playing music together since 1992. They have a particular fondness for traditional Italian songs, as well as the music of Latin America, but enjoying playing a wide variety of songs and genres, including heavy metal and pop. They've released four records so far.

When hired for a wedding, Fabrizio and Wainzinger make choosing the music a collaborative effort. "People come to us with ideas and we make suggestions also. We're open to working with the personalities of the wedding party. Some people have a sense of humor, others like to keep it old fashioned and classical," Wainzinger said.

"We'll play during the ceremony, the reception and the dinner. DJs usually take over after that so then we eat and go home," Fabrizio said with a laugh.

In a time of economic hardship, when people may be cutting back on other expenses, Fabrizio said demand for their live performances remains strong. "People always need live music. It brings happiness," Wainzinger said.

The duo's love of music and enthusiasm for sharing it makes their connection with the crowd an essential part of their performances. "We try to read the faces in the audience," Wainzinger said. "And we have fun."

These local restaurants are donating meals to Bay Area residents in need. Here's how to help.
By Elena Kadvany | 6 comments | 10,845 views

Coronavirus: Plan ahead now for a big outbreak
By Diana Diamond | 18 comments | 3,920 views

Will the Coronavirus Save Lives?
By Sherry Listgarten | 29 comments | 3,740 views