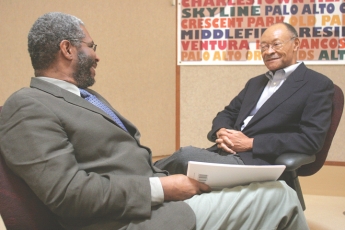 Every student should see this exhibit.


The biggest sin of racism and sexism is that it denies society the benefit of the best efforts of everyone.


I believe a Black man named McCoy invented the drip oiler and, to differentiate it from the many imitations marketed it as "The Real McCoy" hence the phrase.

Our family, with the Harrisons, Gees, Idas, Nakatas), along with the other families on and around Lawrence Lane, were among the first Non-Caucasion (except for the Stannards, Duvenecks, Lelers, and others great folks) to break the color line in 1952-53 Palo Alto. Check the archives of the PA Times for a Saturday article with us kids on a rocking horse, and you will add to the knowledge base.

Hi there ,
I have read and understood what has been written ,but does anyone know how England got i it's national ee theme from because is named after an Egyptian pharaoh .