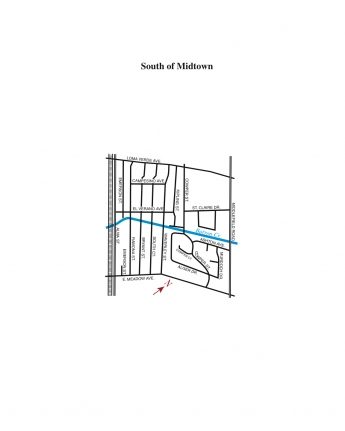 A map of the South of Midtown neighborhood of Palo Alto.

If it's not the birds singing in tree-lined streets populated with Eichlers that brings residents to South of Midtown, it's the convenience.

"It's residential, it's great for bringing up kids and it's convenient to everything," said resident Jerome Levy, who moved to the neighborhood from Washington, D.C., in 1960 to help work for his brother in the then-nascent real estate market.

The neighborhood may not have a formal name of its own, but residents consider it one of the most opportune places to live in Palo Alto. Bordered by four of the city's arterial streets — Loma Verde Avenue, East Meadow Drive, Middlefield Road and Alma Street — it is a tranquil oasis.

Directly across East Meadow is Mitchell Park and its library branch and community center. Adjacent to the 21.4 acre park is a Little League field and Covenant Presbyterian Church.

"It's a friendly, quiet environment, and it's within walking distance to the schools," said Mike Cheong, an engineer who moved from San Jose to his house on El Verano Avenue in 1998. His fourth-grade daughter attends Hoover.

On the eastern side of Middlefield is a strip of six churches of various denominations.

And just to the north are all the amenities of Midtown.

Next to the Stanford Villa and Alma apartment complexes on Alma Street is Alma Plaza, which once used to have an Albertson's grocery store.

Residents of South of Midtown are in close proximity to Charleston Center, a shopping square with a Piazza's, Pete's Coffee and Tea, and liquor store, among other things.

Traffic on Middlefield, East Meadow and Alma can get busy, but within the confines of the neighborhood it is seldom a problem. Patricia Kollings, who came to the area from the Midwest in 1956, the era of the "hot rod" car — when teens were known to tear through the neighborhood at 50 miles per hour — says traffic on Waverley has changed little in 50 years.

Kollings moved to the neighborhood a decade after Palo Alto was mainly agricultural land and the large liquidambar trees that line the neighborhood's streets were just recently planted saplings.

"From my back fence towards the Bay had been all walnut trees and you could see to the East Bay hills with skyline all along," she said.

Most of the homes are single-story Eichler-style houses that were built in the early days of Palo Alto's population boom. The neighborhood is still predominated by these types of homes, but many of them are either being modified or, more commonly, razed to make way for larger two- to three-story abodes.

"That's the kind of change we're seeing now," Kollings said. "Instead of houses being expanded they're being bulldozed. Whatever character this neighborhood had will certainly change."

The first few seconds after awakening; before I remember the virus
By Chandrama Anderson | 0 comments | 2,671 views

Can you stay healthy without making more trash?
By Sherry Listgarten | 2 comments | 1,955 views

Think about helping others in our coronavirus-affected area
By Diana Diamond | 4 comments | 1,860 views