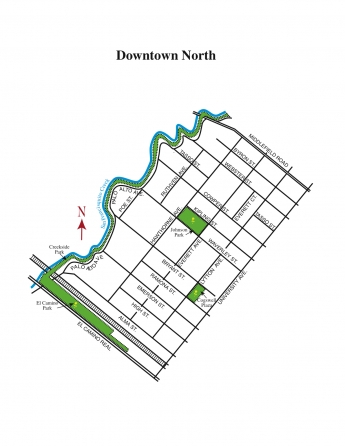 A map of the Downtown North neighborhood of Palo Alto.

The map of Downtown North is missing Bryant Court. It is the only alley in the neighborhood where houses front onto an alley, making it unique. How it was missed is surprising. It runs for one block from Waverley to Bryant, midway between Everett and Hawthorne.

Downtown north should also be remembered as the only neighborhOod in the city that almost suceeded in turning it's public streets into a private enclave. Shockingly the city council did not succumb to pressure from the neighborhood NIMBYists and the self-serving plan was abandoned.


Neighborhoods that want to become private should be required to buy back their quasi private streets and also pay for improvements to alternate rights of way to accommodate this displaced traffic.

"Neighborhoods that want to become private should be required to buy back their quasi private streets and also pay for improvements to alternate rights of way to accommodate this displaced traffic."

It follows you believe that neighborhoods full of cul-de-sac streets, like south PA, should cut those de-facto private streets open to allow through traffic, right? Or does ad-hoc libertarianism ends at one's own front yard?

It seems ignorance of history has resulted in some misguided statement about the intent of the Downtown North Traffic Calming demonstration. Private streets was never the intent or desire of the residents. From the late 1970's the City recognized a problem with cut-thru (non-resident) traffic. After city-funded studies and traffic calming design options were presented, the road closures were implemented on a temporary basis. They did indeed reduce cut-thru traffic, but some residents did not agree with the limit these measures placed on their own access. Most all of the barricades were removed. Road closures are used to control traffic in other Palo Alto neighborhoods. College Terrace has many roads closed to thru traffic. This was one of the considerations in the Downtown North selection of road closures for traffic calming.

Portland's Thai food darling Pok Pok will be popping up on the Peninsula this spring
By Elena Kadvany | 2 comments | 3,797 views

Flying: How to lower your impact
By Sherry Listgarten | 19 comments | 3,050 views