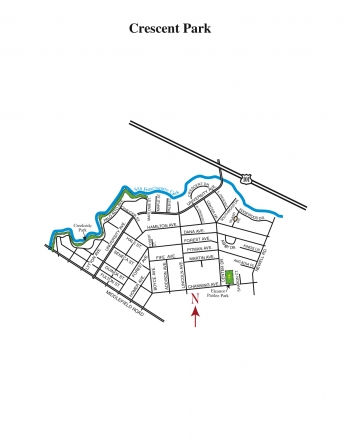 A map of the Crescent Park neighborhood of Palo Alto.

Like this comment
Posted by Cresent Park Neighbor
a resident of Crescent Park
on Jan 8, 2010 at 10:28 am

We love our neighborhood. If you love it then we'd love to have you buy a house here.

There is one caveat though. If you're going to knock down one of the existing, traditional homes, please build something that fits into the existing architectural style of Crescent Park. Please do NOT build a post modern structure that looks like two shoe boxes stacked on one another. Please do not build with materials that aren't used commonly in the existing neighborhood. Please do not build something that doesn't fit in. It's a pretty basic set of requests, but we're starting to see too many people moving in building houses that would fit better in South Beach, the OC, or some other locale.

If you want to show off your superior architectual creativity and taste please move to a neighborhood where your neighbors don't live in close proximity to your creation. If you disobey this basic request, you will end up with neighbors that dislike you for your "superior" taste.

Th.ankyou for saying whay I have always wanted to say!

Case in point, house on corner of Lincoln across from Addison School (IKEA hellhouse)

Portland's Thai food darling Pok Pok will be popping up on the Peninsula this spring
By Elena Kadvany | 2 comments | 3,779 views

Flying: How to lower your impact
By Sherry Listgarten | 19 comments | 3,030 views