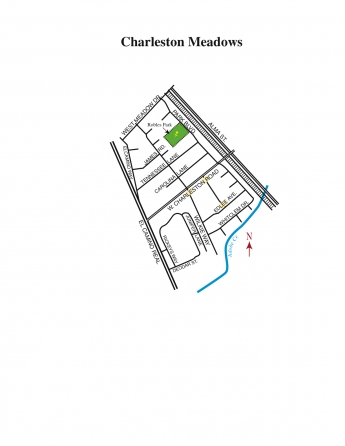 A map of the Charleston Meadows neighborhood of Palo Alto.

When John and Phyllis Klein moved into their Eichler in the Charleston Meadows neighborhood in 1955, there were no streetlights or sidewalks. It was quite rustic, but they had electricity, John Klein joked.

Today, Charleston Meadows — although divided by the busy Charleston-Arastradero corridor — still retains its neighborhood charm. Bordered by West Meadow Drive and Adobe Creek to the north and south, and by Alma Street and El Camino Real to the west and east, it is made up of small cul-de-sacs and gets very little through traffic.

The fact that most streets are not major thoroughfares was what attracted Amy Ho to the neighborhood in 2002. "It's very peaceful," she said. "As you drive in on Wilkie they have all those trees, so you've got the tree-canopy effect."

The neighborhood's layout promotes an intimacy among the residents. Keri Wagner, who has lived in Charleston Meadows since 1994, notes that what is unique about the area is "the way it's tucked in. ... People get to know each other because it's not that large."

This past summer they organized the first neighborhood block party on Wilkie Way, which was also an opportunity to welcome the new residents of the Arbor Real development. The event was such a success that members of the association now hope to make the block party an annual event.

Most people are "completely welcoming to the new residents," Epstein said, and happy with the results of the new construction. Eleven single-family homes line Wilkie Way, and a mix of condominiums and townhouses were built in the area between Wilkie and El Camino Real this past year.

Although there were concerns originally about land use, housing density, parking, traffic and infrastructure, "people are happy to see nice new houses and curious to meet new people," Ho said.

Ho and her family finished remodeling their home in 2007. Most remodeling projects have avoided the huge "monster home" effect, so there is little objection to construction. Rather, walking through the neighborhood, residents are curious and tend to share remodeling ideas, Ho said.

Housing isn't the only improvement in the neighborhood. The "type of neighbors have improved," too, John Klein said. When he had cancer five years ago, neighbors regularly stopped by to check up on him. "No one bothers you, but if you need help it's there."

But some things stay the same. Klein, 89, who describes himself as "king of the kids" with the children in his cul-de-sac, still hand delivers the Charleston Meadows "Rag," the neighborhood newsletter.

"It's hard to communicate to someone who doesn't live here how much we like the people," Epstein said.

The first few seconds after awakening; before I remember the virus
By Chandrama Anderson | 0 comments | 2,668 views

Can you stay healthy without making more trash?
By Sherry Listgarten | 2 comments | 1,953 views

Think about helping others in our coronavirus-affected area
By Diana Diamond | 4 comments | 1,858 views