Museum traces the history of music through a wealth of instruments, from past to future 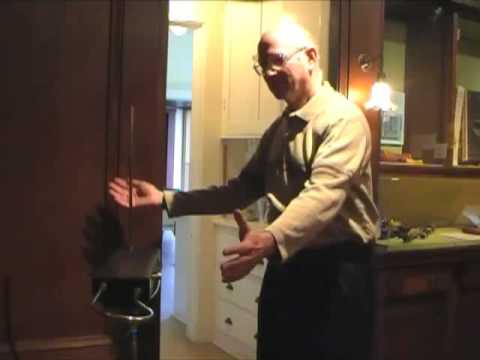 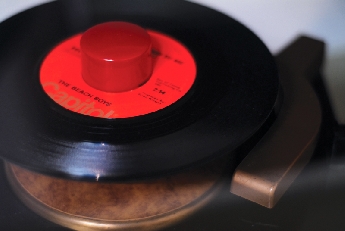 This record player and Beach Boys album are among the vintage objects on display at Palo Alto's Museum of American Heritage. Photo by Dana Ullman/Palo Alto Weekly.

We go crazy for touch-screens. We're wild about Wii. Move your hand, flick your wrist, drag a finger across a smooth glass surface and you're operating technology. Within the span of a couple of years, the idea of a graceful, intuitive user interface has blossomed, making the good old QWERTY keyboard seem almost clunky by comparison.

But as cool as these new gadgets are, they have nothing on the theremin. Developed in 1919 by Russian physicist Leon Theremin, the invention that bears his name is a futuristic musical instrument that requires no physical contact whatsoever by the player. Merely walking by the instrument creates growls not unlike that of a walrus.

It's a fact not lost on the throngs of children at the Museum of American Heritage in Palo Alto on a wintry Friday morning. As the kids crowded around the theremin and waved their arms in wonder, the instrument blipped and bleeped and occasionally sang, prompting outbursts of, "How does that work?"

Wave your right hand in front of an upright antenna and the pitch magically rises or falls. Move your left hand closer to a sensor and the volume drops; move it farther away, and the volume increases. No frets, no strings, no mouthpiece. Just air.

The museum's curators purposely placed the instrument in a high-traffic area so the theremin would be activated by unsuspecting passersby. So it's no surprise that it's the hit of the museum's exhibit "Music to One's Ears." While the exhibit was originally scheduled to run from late August through Jan. 18, its success has earned it a two-month extension through March 29.

Even those who don't recognize the instrument's name may remember its unique, haunting sound. According to Bob Katzive, a member of the museum's exhibit committee, the theremin is featured prominently in classic 1950s science fiction movies such as "Forbidden Planet" and the original version of "The Day the Earth Stood Still." Music fans may recall a theremin-like sound from the chorus section of the Beach Boys' sonic patchwork hit "Good Vibrations."

The instrument, which almost single-handedly heralded the 20th Century electronic-music movement, is still as fascinating today as it was in 1919.

But the theremin is by no means the only interesting thing at the MOAH exhibit. The rooms of the historic Williams House are filled with all manner of percussion, keyboards, brass, wind and stringed instruments. The variety of instruments, both strange and familiar, is inspiring, ranging from the modern and digital to the ancient and analog. The sheer amount of invention, engineering and ingenuity on display leaves one with the distinct impression that music might be something far more than just entertainment — it might be a mandatory requirement for human life.

That's how Keith Kvenvolden felt after reading Daniel Levitin's 2006 exploration of the phenomenon, "This is Your Brain on Music: the Science of a Human Obsession." A volunteer at MOAH, he was inspired to write a proposal for the exhibit.

Kvenvolden, a retired geochemist for the USGS, has a love of early music and plays in an amateur recorder orchestra. In fact, one of his wooden recorders is on display at the exhibit. Originally he planned to highlight early music in the exhibit, but a museum committee took the idea and expanded it, he said. So "Music to One's Ears" took on a distinctly technological tone.

Many of the instruments are on loan from Frank Ford, the co-founder of Gryphon Stringed Instruments in Palo Alto. Accompanying information on each display describes how the instrument transmits its unique voice into audible soundwaves.

For instance, an unusual pipe-like wind instrument, the crumhorn, looks like a crude wooden saxophone. Kvenvolden says it produces a buzzy tone. "It's like a super kazoo," Katzive adds. When you understand it is an early reed-based wind instrument, that suddenly makes sense.

The handmade hurdy-gurdy prominently displayed in the entrance hall is a mechanical wonder. With the ability to sound like a small violin orchestra, the instrument's strings are played by resin-laden wooden wheels that the player activates with a hand crank. Wooden keys on the body of the hurdy-gurdy play melody lines while drone strings provide a background accompaniment.

Bringing the technological angle home, the description of an ornate autoharp relates that the instrument sold new in 1905 for $450. In contrast, the price of the 1909 Model T Ford was $850.

A small pipe organ opposite the theremin combines the old and the new, marrying a small electronic keyboard to a rank of wooden pipes. The instrument is powered by an electronic windchest; the press of a key shoots a jet of air through the corresponding pipe, sending a sonorous whistle into the room.

Throughout the exhibit, video screens and interactive computer displays allow visitors to see the instruments being played in their professional contexts and hear and compare their pitches and timbres.

A room devoted to recording technology escorts guests from the wax cylinder to the phonograph to magnetic tape to digital audio. Here one can hear the very first example of recorded audio, a French recording made on paper coated with lamp black (soot); soundwaves were etched into the soot layer with a stylus.

Kvenvolden says people have told him this is the best exhibit they've yet seen at the museum. "Everybody gets something out of it," he said.

• What: "Music to One's Ears," an exhibit of instruments at the Museum of American Heritage.

Like this comment
Posted by Lawrence A Pizzella
a resident of another community
on Dec 19, 2008 at 6:55 pm

I truly enjoy being associated with The Museum of American Heritage. As a volunteer instructor, I have plenty of opportunities to visit and browse the exhibits. The current exhibit, "Music to Ones Ears" teaches me something new each time I see it. This story captures the exhibit very nicely.

Being a stickler for details, however I feel compelled to make a correction about the theremin. Through my interest in early Technology and early Crystal radio, I have had the good fortune to meet some very interesting people over the Internet. One of these folks builds all kinds of interesting early contraptions, such as theremins, early radios, Giant Tesla coils. He is a master builder and artist. He informed me that the Beach Boys "Good Vibrations" did not use a theremin, but a different instrument called a tanneran. His talents are well known and he was asked by Brian Wilson of the Beach boys to make one for him.

Tom is a very interesting fellow, as you can see by his web site. Hope you like this.

According to the story above, Good Vibrations featured a "theremin-like sound," not a theremin by name.

The only substantial difference between a "tannerin" and a "theremin" is how one is played, not how one sounds.

In fact, it would be far easier to play a tannerin, because it is activated by a mechanical slider.

But it also is therefore only about a third as cool. . .

Theremin still = cooler than the iPhone.

These local restaurants are donating meals to Bay Area residents in need. Here's how to help.
By Elena Kadvany | 6 comments | 10,808 views

Coronavirus: Plan ahead now for a big outbreak
By Diana Diamond | 18 comments | 3,889 views

Will the Coronavirus Save Lives?
By Sherry Listgarten | 29 comments | 3,721 views