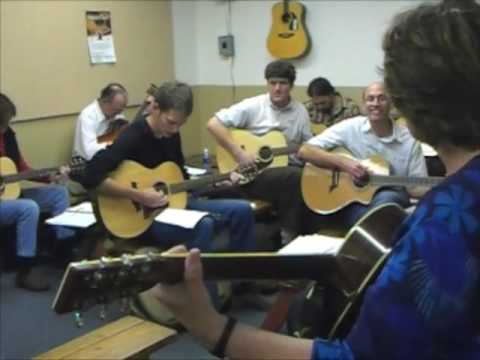 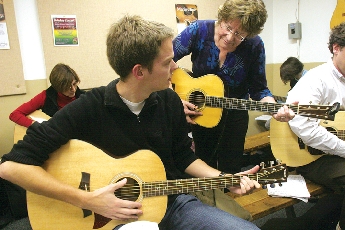 Some evenings when guitar teacher Carol McComb has four classes without a break, one student brings her dinner. Tonight another proudly hands her something large and dark wrapped in cellophane.

"It's figgy pudding!" the student announces. McComb bursts out laughing. The gift is in honor of her Christmas-song class the other night.

After 33 years of teaching at Gryphon Stringed Instruments in Palo Alto, McComb still draws rave reviews. The veteran musician, whose style is a blend of folk, country, bluegrass and love songs, became Gryphon's first teacher the year it set up shop on Lambert Avenue. Each quarter, she still teaches group guitar, voice and songwriting courses. Titles include "Starting to Play," "Already Picking Some," "Light Rock and Pop" and "Bluegrass Harmony Singing."

"The biggest hurdle to learning is being able to sound good. She can help you play what you're supposed to play, and you sound like music right from the start," says Richard Johnston, who founded Gryphon with Frank Ford.

Johnston also commends McComb's friendly connection with her students, which helps create camaraderie at Gryphon. "They're learning how to play socially here. Then you're more likely to stick with it."

In its front room, Gryphon is a galaxy of gleaming wood, filled with guitars, mandolins, ukuleles and other instruments. Behind doors and in back halls behind the repair shop are classrooms where McComb and about a dozen other educators teach. It's all in tune with the founders' initial goal of making Gryphon more than, as Johnston put it, "a place that just sold stuff."

Everyone tunes up together, with McComb walking around to bend her head toward individual guitars here and there. Then they review the Hank Williams song "Hey Good Lookin'." McComb leads the singing as they all play in a mellow tempo, her voice natural with an easy vibrato.

One man makes a mistake, then laughs and apologizes. McComb says: "Oh, no. That's probably the way it's sometimes done."

Carole King's "You've Got a Friend" is more difficult, and McComb says the chords between words to help: "You just — G — call out my name." The bridge of the song is clearly the hardest part, and disparate notes mix with giggles. Still, even if all the chords aren't right, the sound of 14 guitars playing together in one small room has a richness. The air is thick with concentration, making an almost audible hum.

McComb notes: "We figured out there are like 13 different chords in this song. And some of these folks have only been playing for six months."

Other songs the class works on tonight include Gordon Lightfoot's "Early Morning Rain" and the Grateful Dead's "Ripple." McComb remarks of the latter: "This song never ends, by the way. You just have to la-la-la and fade out."

Afterwards, Diane Boyden, the student who made the figgy pudding, says she and her husband, Ken, are just finishing their third class with McComb. She says she loves the liveliness of the sessions, and admires her teacher's stage poise.

"She brings to the classroom a great performance background as well as being a great teacher," Boyden says.

McComb has a wealth of experience to draw on. As a child, she experimented with the harmonica and the accordion, which she was playing by ear at age 10. By 13 she was hooked on the guitar, which she also learned by ear.

"My friends and I copied each other. It was the beginning of the folk era — the thing to do," McComb recalls in an interview.

As teens, she and friend Kathy Larisch started singing and playing together, spending hours working out harmonies. McComb says their lack of vocal training was an asset to their unusual compositions and intervals.

"If something gave us a chill, we'd say, 'That's it!' If we'd studied formally, we might not have felt so free to use dissonance," she says.

The two sang together as the duo Kathy and Carol, and McComb recalls going to Tucson to perform when she was 18. The pair's opening act was a singer named Linda Ronstadt.

McComb made her first recording for Elektra Records in 1965 with Larisch, and says that record helped get her a tour with Mimi Farina, as well as concert gigs with James Taylor, Arlo Guthrie and Pete Seeger. She has since put out three solo records, most recently "Little Bit of Heaven" in 2000, and still performs with Larisch and Ronstadt, among others.

Somewhere along the road, around age 17, McComb taught herself to read music, with the help of books and friends, and then started teaching other people to play guitar. To this day, she says: "I can see the benefits of ear playing and of reading music. I can do both, and that helps me with my students."

After touring with Farina, McComb decided the grueling life on the road wasn't for her. In 1972, she rented teaching space in Palo Alto at the Institute for the Study of Nonviolence, a group that was started by Joan Baez and was headquartered on Lytton Avenue. (It's now the Resource Center for Nonviolence in Santa Cruz.) But she found her garage space less than ideal.

Then, Gryphon, which had opened in 1969 and was in a storefront on El Camino Way in Palo Alto, decided to move to the corner of Lambert and Park avenues in 1975. As McComb recalls it, she asked its owners if she could rent space from them, and they responded: "Wow! We've been waiting to ask you." She's been there ever since.

McComb's face is bright when she talks about teaching, and students have remarked on how enthusiastic she seems even after four classes a night, Monday through Wednesday. She says she draws her energy from the students' excitement when they learn something new, and notes that teaching a group can be like performing in front of a crowd.

"There's a very special kind of high to watching people get pleasure," she says.

To keep classes fresh, McComb continually adds new songs. And she asks students to vote on which classes they'd like her to teach the following quarter. She estimates she's taught more than 90 different workshops over the years, including the popular "Texas Songwriters," which was suggested by a student and is in its third incarnation.

Here and there, McComb, who lives near Woodside, squeezes in time to write, record and perform. Coming up Dec. 19 is one of her favorite concerts of the year, the annual show put on by the Gryphon All Stars band and the Gryphon Carolers. Both groups grew out of musicians studying and meeting at Gryphon, and McComb plays in the band, co-directs the choir and produces the concert.

The program is always eclectic, with such genres as bluegrass and Brazilian, Irish and jazz. It will include a Kathy and Carol arrangement of the seasonal song "Brightest and Best," overlaid with a traditionally African-American song, "Virgin Mary Had A-One Son," McComb says.

McComb says she imagined a man in the 1940s, who had to walk for help after his car broke down. While walking, he passes two neighboring churches, and he hears music coming from both of them, blending in the air.

That's fitting for a musician who says the most exciting thing about music nowadays is how it crosses genres. Artists are mixing blues, jazz, bluegrass and rock to make new styles. And it's hard to describe McComb's music in one word or two. She suggests "roots music."

"Sometimes people have too narrow an idea of what one genre is," she says. "I think our music today is a never-ending combination of things you can do."

What: Carol McComb performs with Ed Johnson and the Gryphon All Stars and Carolers at "A Thousand Candles," the groups' 27th annual holiday concert.

Info: Go to GryphonAllStars.com or call Gryphon Stringed Instruments at 650-493-2131. The store is at 211 Lambert Ave. in Palo Alto. McComb's winter classes start Jan. 5; for details, go to carolmccomb.com.

A Pragmatic Approach to A Trillion Trees
By Sherry Listgarten | 1 comment | 2,501 views

The University of California’s flexible policies during COVID-19
By John Raftrey and Lori McCormick | 6 comments | 1,915 views

Repairing a Disagreement with your Beloved & “Physical” vs. “Social” Distancing
By Chandrama Anderson | 0 comments | 1,275 views