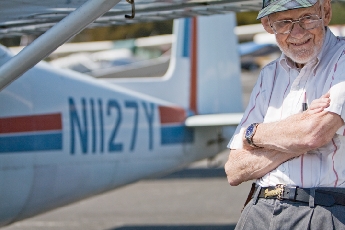 Professorville resident Arthur Morse, 86, seemed wistful as he looked back on his life and thought about the opportunities he's missed.

"One thing I wanted to do — but I won't get to do now — is a parachute jump. Somebody talked me out of it," he said.

That was four years ago, when Morse was 82.

A retired mechanical engineer, Morse comes out to the Palo Alto Airport nearly every day. Flying is his passion — or at least, one of them. In his life, there have been many: cruising boats, sports cars, guns and motorcycles to name a few. But perhaps the most long-lasting has been small planes.

"I've limited myself to one expensive toy at a time, by and large," he said with a chuckle.

Morse still flies a plane almost every week, taking a vintage 1962 two-seater Cessna 150 owned by a friend up into the skies above Palo Alto. Sometimes he flies with a friend who is also a pilot to have lunch in Half Moon Bay. Last weekend, he flew to Watsonville to have his favorite bowl of chowder.

At other times, he just takes to the air to see the sights: the small white crests of waves lapping in San Francisco Bay, the cars crawling like legions of ants moving breadcrumbs to a colony; and up over the verdant 2,000-foot Santa Cruz Mountains, the creeks coursing through tan valleys like veins until they empty into the seas.

On a recent Tuesday morning, Morse got ready to fly again. He polished the windshield and removed the wings' tie-downs, checked the fuel gauge and turned on the radio.

"I derive a certain enjoyment from flying. I can look out under the wing and realize that I'm being suspended by an invisible gas," he said.

Morse climbed into the cockpit and put on his headphones. Today was a special day. He was taking a photographer with him. He hasn't taken anyone else up in the plane with him for close to a decade, except for frequent flights with a lady friend who is 40 years his junior and is a pilot active in the Civil Air Patrol.

"There's no romance, but it's very pleasant," he said.

His wife, now deceased, went up only once with him, but "she didn't like airplanes," he added. And during his marriage and raising three sons, he knocked off flying for almost 20 years, he said.

Morse maneuvered the plane down the runway with a sense of command. The little plane looked a tad worn, compared to the shiny knew ones taking off before it, but the engine roared as the plane barreled down the pavement, lifting off with ease. In a minute, Morse was high and flying southwest. The plane banked west, then disappeared from view.

It reappeared a half hour later, with Morse landing. The tires made a brief screech as they hit the tarmac.

"We survived," Morse quipped, climbing from the cockpit.

Landings are his favorite part of flying. "When I make a good landing, that's the best part," he said. Tuesday's was a good one, he said, satisfied.

He lifted the plane's tail and yanked backward, moving the Cessna back into its parking space.

The skies are much more crowded now than when Morse first began flying on June 2, 1944, he said.

The first plane Morse flew was an Aeronca Defender, an ex-military plane.

In 1946, he made the papers as far away as Chicago after making a flawless emergency landing in a rented plane in the middle of downtown Waukegan, Ill. Morse dropped the plane into a vacant lot, without hitting so much as a branch or wire, the papers noted. He was 23 at the time.

Although in his late 80s, the worst discomfort Morse has is carpal tunnel in both hands, he said. He has good blood pressure and low cholesterol, so he "isn't afraid of having a heart attack in the air," he added.

But he laughed at the irony of being a pilot and an acrophobe — he does have a fear of heights.

"If there's a cliff over here, there'd better be a railing," he said.

But it's different looking out of a plane than standing on the edge of a cliff. In the cockpit, he has a sense of control, he said.

The only other regret he has — besides not jumping out of an airplane — is that he didn't get to fly the kit plane he was building. That plane, owned by a friend, ended up in storage out of the area and was never flown.

"I really wanted to fly that plane," he said.

Singapore's oldest cafe was about to open in Palo Alto. Then, the coronavirus hit.
By Elena Kadvany | 2 comments | 4,899 views

A Pragmatic Approach to A Trillion Trees
By Sherry Listgarten | 4 comments | 4,144 views

Repairing a Disagreement with your Beloved & “Physical” vs. “Social” Distancing
By Chandrama Anderson | 2 comments | 2,826 views