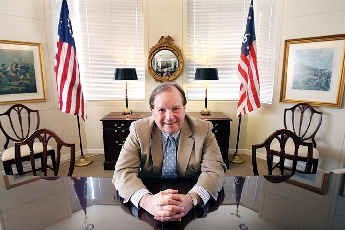 Richard Alexander's Revolutionary War collection isn't a hobby; it's a passion. He hands out $2 bills engraved with the Declaration of Independence the way other people hand out business cards. Even his phone numbers end in 1776.

Alexander constantly surrounds himself with reminders of the American Revolution, from the time he hangs a giant flag from the upper story of his Tudor-style home in Old Palo Alto in the morning to the end of his workday in the sixth-floor law offices of Alexander Hawes, the firm he heads in San Jose.

At home and in the office, he looks upon a collection of 50-odd early-American prints, replica flags, busts and other Revolutionary-period memorabilia.

There's a copy of the famous "One if by land" lantern; a print of Benjamin Franklin during his last trip to France; 19th-century prints of Washington at the Battle of Trenton and at Valley Forge; and an old print of the Boston Massacre that was engraved by Paul Revere.

A prominent Bay Area personal-injury attorney, Alexander adheres to a legal philosophy based on the spirit of 1776. In the courtroom, he notes on his law firm's Web site, he confronts "wrongdoers who have taken from our clients their property and have injured their well-being. Not the type of tyrant and oppressor fought two centuries ago on village greens with muskets, but modern day Redcoats who can be equally arrogant in their efforts to avoid responsibility for the damage they have caused."

Alexander represents people who are injured and who face overwhelming odds, he said.

Earlier this month, he was in court on behalf of a 12-year-old boy who was brain damaged after being struck by a car driven by a woman allegedly speeding in a school zone.

"The [founding fathers were a small group of lawyers who had a high degree of [interest in human rights and were focused on a common goal. Sometimes when I sit in a courtroom ... I look up at the flag and tell myself that if they could do that, so can I," he said.

Alexander started the collection in 1990, when his son, Marshall, enrolled at Boston College.

"I was walking down Newberry Street, and I saw a print shop. I bought a print of the Bonhomme Richard fighting the Serapis," he said, referring to John Paul Jones' ship.

A couple of weeks later, a dealer offered him a print by Emanuel Leutze of George Washington Crossing the Delaware. The large painting hangs in the Metropolitan Museum of Art in New York.

"The small original is owned by IBM," he said.

Since that time, whenever he is in New York, Boston, Philadelphia or Paris, Alexander spends a couple of hours in shops on the lookout for old prints.

Alexander considers his most precious possession an early-1780s print of the Surrender of the Army of Gen. Cornwallis that he found on the Rue de Siene in Paris.

"I'm always amazed the paper still exists. Some of it is close to 200 years old," he said.

A lifelong Democrat, he walked his first precinct when he was 7 years old. Growing up in Cleveland, Ohio, he went to Paul Revere Elementary School, Nathan Hale Middle School and John Adams High School.

Early American history "has always been a part of me," Alexander said.

"In the West, we don't see or hear or feel much of the American Revolution, the way we would in Boston or New York. It's important to remind people to appreciate these very valuable roots," he said.

While on break from the recent trial, Alexander stopped in front of a museum-quality model of the Bonhomme Richard. It is the ship from which Jones said, "I have not yet begun to fight." A gift from his wife, Nancy, for his 40th birthday, it is the first thing he sees when he comes to work each day.

A replica of the flag flown on the ship stands next to the case, along with an egg-tempura painting of Jones painted by a client. The Bonhomme flag is the only one with red, white and blue stripes, put together by Jones' sail makers in a hurry and with only a rudimentary description of the American flag, he said.

Alexander also has a replica of the American Revolution flag, known as the "Liberty Tree," with a green tree in the corner on a white square instead of the blue field with stars. It flew during the Battle of Bunker Hill, and Alexander has a print of the battle that also shows the tree flag.

Alexander said he has great respect for the country's founders and their "courage to do the right thing at the right time."

The prints "provide information we would never normally learn. ... It's something all Americans can share in," he said.

The first few seconds after awakening; before I remember the virus
By Chandrama Anderson | 0 comments | 2,213 views

Can you Stay Healthy without Making More Trash?
By Sherry Listgarten | 3 comments | 1,531 views

Think about helping others in our coronavirus-affected area
By Diana Diamond | 2 comments | 1,088 views