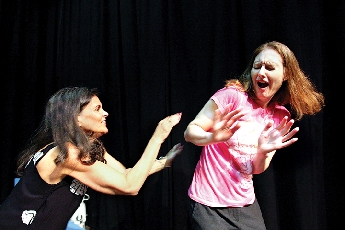 "Composting," Caryn Huberman Yacowitz said with a completely straight face, "is my passion."

For two seconds, there was silence. Then, suddenly, she and the two women sitting next to her at the Pear Avenue Theatre exploded in short fits of giggles.

"No, I'm serious!" Yacowitz insisted through the din. "I was on NPR talking about it!"

The laughter stopped, and it was almost possible to hear the wheels turning inside Louise Fusfeld's head as she reasoned quietly that composting and comedy go hand in hand quite well. After all, just like biodegradable garbage, comedy sketches have to go through a decomposition process before anything can grow from them.

"Sometimes we're too close to what we wrote, and we need to let other people break it down and revise it," Yacowitz agreed.

The conversations among Yacowitz, Fusfeld and Betsy Franco, three local part-time comedians, are typically more than a little silly, but they're also thought-provoking. Wielding this lethal combination of smart and funny, the trio of Peninsula residents has written and rewritten 10 Saturday Night Live-style sketches, collectively titled "Door No. 3," that premiere Aug. 1 at the Pear Avenue Theatre in Mountain View. The women call their group Suburban Squirrel Productions.

They might understand life's complexities well, but they choose to keep their sketches simple. The set: a black backdrop and some moveable blocks that can serve as chairs, couches and beds. The costumes: fake nails and eyelashes. The subject: sex.

Actually, the subject matter is under debate. "People who saw the preview show said the overarching theme was sex," Franco said. "I think it's about emotional problems and neuroses."

Whatever the subject, there's no mistaking the fact that women wrote it. Sketch titles include "Menopausal Anniversary," "Womb with a View" and "Emotional Stunt Doubles."

Betsy Franco was on the set of the new movie "Pineapple Express" with her son, up-and-coming actor James Franco, when she got the idea that led her to write the third sketch. "Everyone had a stunt double," she said. "It was insane! I thought, 'What if actors didn't just have doubles to do physical stunts?'"

It all sounds like fun and games until everyone realizes the truth behind the comedy: The absurd neuroticism that seems too over-the-top to be real actually dwells within.

"We're trying to unmask neuroses and obsessions and put them out there," Fusfeld said. "Everything goes back ultimately to things that don't seem so earthshaking, but they really are."

Unveling their hidden neuroses through writing and performance has been as therapeutic as it has been hilarious for the three women. Yacowitz, quiet and contained in real life, "could be anything I wanted when I got onstage" without consequences, and the things that "used to irritate the heck out of" Franco became amusing.

Performing comedy wasn't necessarily second nature for any of them, though. They say they owe much of their knowledge to Kay Kostopoulos, an acting professor at Stanford University. The three became close friends in one of Kostopoulos' classes and kept coming back for more.

"She makes everyone feel so comfortable and safe," Yacowitz said. "Everyone feels like they are respected, even when they do something stupid."

Finally, Kostopoulos suggested that the group of actors she kept seeing in class rent out a local theater and create their own show, Fusfeld said. It seemed appropriate — Fusfeld is a screenwriter, Franco and Yacowitz are both published young-adult fiction writers, and all three share a passion for acting and comedy — so they came to the Pear to write and perform "Door No. 3."

All three drew ideas from comedians they revere — Woody Allen, Goldie Hawn and Lily Tomlin were just a few of the names they dropped — but most of their inspiration came from their own daily lives.

One day, Yacowitz channeled her frustration with a Global Positioning System through writing. "I have a difficult relationship with my GPS," Yacowitz said, primarily the fact that the mechanical voice of the GPS is a woman's. "As the other female in the car, I have problems dealing with her. I don't have technical problems, just deep emotional problems."

The conflicted, emotional, menopausal characters make for great laughs, but they're also very real voices in the back of these comedians' heads, shouted aloud for the first time.

"In going for things that are close to us, I think we've all taken some chances," Fusfeld said. "You can't be funny without uncovering yourself a bit."

The risks they've taken in exposing themselves makes these women believe comedy may be an underrecognized art, one that may be harder to pull off than a Shakespeare tragedy because it hits closer to home.

"To me, comedy is this really high art form. To society, it's absolutely vital," Fusfeld said. "Everywhere in the world, it's always there in some form because it's a way to relieve ourselves of all these things that drive us crazy — and it's safe because it's comedy. You can't just say it straight...unless you're Tennessee Williams."

What: "Door No. 3": a series of comedic sketches written and produced by Caryn Huberman Yacowitz and Betsy Franco of Palo Alto and Louise Fusfeld of Mountain View.

Where: Performances are at the Pear Avenue Theatre, 1220 Pear Ave. Unit K, in Mountain View.

Cost: Tickets are $15 for general admission and $10 for students and seniors.

Info: E-mail lfusfeld@pacbell.net for information or to reserve tickets.