VIDEO: Apple of my iPhone

Freebies, media savvy and some hi-jinx during the long wait 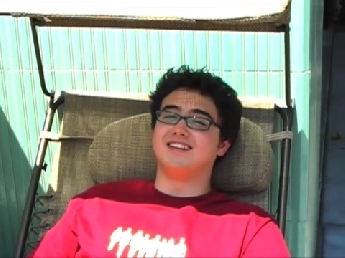 Only 19 hours to go. Outside the Apple store on University Avenue Thursday afternoon, a handful of hopefuls lined up in anticipation of the new iPhone, slated for Friday release.

They'd been waiting since the night before -- not out of desperation but for fun, they said.

The two teens were undeterred after being "banned for life" from Apple earlier this year for downloading a game onto an iPhone in the store. Apple employees later denied the ban and had been only courteous Thursday, providing the boys with free water, they said.

Perhaps aware of the fame that long lines have garnered during previous Apple product releases, some were taking advantage of anticipated media coverage.

Meanwhile, video journalist Taylor Barcroft was plugging the podcasts he's made during Barack Obama's presidential campaign. Decked out in Obama gear, Barcroft hid from the heat under an umbrella at about sixth place in line.

The umbrella came from a family that had stepped away from line briefly, he said.

Barcroft, who drove up before sunrise from Santa Cruz, said ruefully he would have left earlier if he'd known he wouldn't be first. Last year the lines were much longer, he added, pointing down the block.

It would likely grow in the evening when people got off work, he said.

Meanwhile, trouble struck in the form of a man who identified himself only as "Alex" from the Ukraine. Alex warned Barcroft a competing line was forming around the corner and would jump ahead of him in the morning when the store opened.

So what happened next? Watch the video and find out.

Why not give them a free phone? That should make up for the "ban for life" that Apple denied- later?!

As I added on to the other related posting:

"Another news publication ran a photo of a couple of guys SITTING on the sidewalk outside the Apple store. Did they get reported to the police and recieve citations for violating the "Sit/Lie" ordinance?"

I'm gonna guess not. If they got a freebie water the store gave them "permission" to violate the law - like the last time BUCKS were made there on the first release - and the pizza party that the store allowed because business suffer when people sit on the sidewalk out in frront(???!!).

These local restaurants are donating meals to Bay Area residents in need. Here's how to help.
By Elena Kadvany | 6 comments | 10,832 views

Coronavirus: Plan ahead now for a big outbreak
By Diana Diamond | 18 comments | 3,909 views

Will the Coronavirus Save Lives?
By Sherry Listgarten | 29 comments | 3,733 views