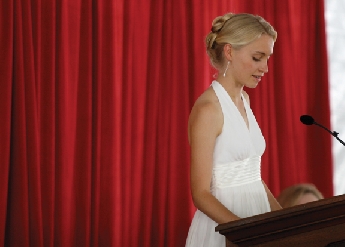 A graduate from the Castilleja class of 2008 speaks to the audience at the graduation ceremony on June 7, 2008. Photo by Danielle Vernon/Palo Alto Weekly.

It capped a remarkable year for Castilleja.

Speaking to 62 graduating seniors, San Francisco's District Attorney Kamala Harris was one of a line-up of powerful women to visit the school this year as part of centennial celebrations.

In April, Secretary of State Condoleezza Rice spoke at the school's Centennial Symposium via telecast, holding forth on the subjects of power and leadership. Other speakers included business and nonprofit leaders.

The school's Centennial Campaign, culminating this year, raised about $36.5 million, according to Director of Communications Dana Sundblad. This spring all students traveled to China and India to learn about human rights funded by the campaign.

Last Saturday June 7, both graduates and the school could be said to move forward. The school, at the start of its second century, witnessed its centennial class rise up and move on. And the women, clad in white, began the next step toward their own futures.

Singapore's oldest cafe was about to open in Palo Alto. Then, the coronavirus hit.
By Elena Kadvany | 2 comments | 4,985 views

A Pragmatic Approach to A Trillion Trees
By Sherry Listgarten | 4 comments | 4,150 views

The University of California’s flexible policies during COVID-19
By John Raftrey and Lori McCormick | 6 comments | 2,715 views