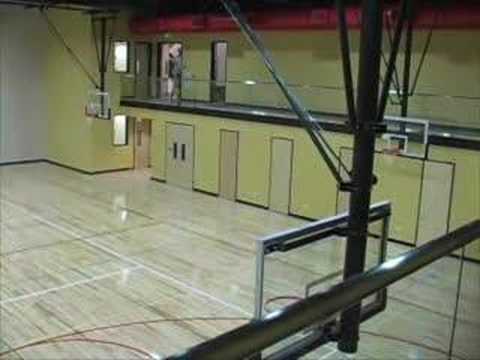 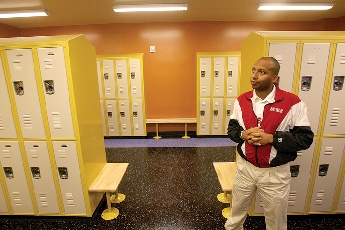 A new, multi-level fitness complex with a $14.5 million price tag will open Friday at Castilleja School in Palo Alto. Not merely a gym, the Fitness and Athletics Center will also house the comprehensive "fitness and wellness" program on developing a healthy lifestyle, Director of Athletics Jez McIntosh said.

Castilleja, an all-female private school, hosts 43 sports teams in grades six through 12, all of whom previously jostled for locker room and court space in a smaller building, he said.

His goal was to create a space not only for athletes but for the whole student body, he said.

The cavernous gyms are now big enough to host major athletic competitions such as the NorCal volleyball games, while adjacent spaces offer fitness machines, a dance studio, a rock-climbing wall and more to all students.

Each student will get a locker and staff also has a special locker room to encourage them to use facilities, he said.

An on-duty trainer will provide work-out tips, he said.

The architecture matches the philosophy behind the school's "fitness and wellness" program, which McIntosh designed to replace traditional physical education, he said.

Previously, athletes at Castilleja were exempted from PE and the class itself roughly followed the traditional "run laps around the gym and do calisthenics" model, he said.

But he wondered whether allowing athletes to skip gym actually taught them healthy habits, he said.

"Just because you play soccer every day doesn't mean you're fit," he said.

And parents of the small group of girls who were left in PE weren't satisfied, he said.

"Parents would say, 'She has her nose in a book all day long. Can you teach her how to take care of her body ... [and be fit for life?'" he recalled.

The school changed its rule to allow students one quarter exempt per sport played, while McIntosh began to plan a new class that would teach healthy habits, he said.

Now in its fourth year, the fitness and wellness program has expanded to take over all of PE, offering a variety of electives including pilates, kickboxing and spinning, he said.

After two to three weeks of one course, students move on to another, and also take a several-week wellness section in between fitness cycles, he said.

The difference between aerobic and anaerobic workouts, eating disorders and substance abuse are just a few topics the wellness lectures cover, he said.

The program's overall variety should offer something for everyone, Communications Director Dana Sundblad said, noting the rock wall might hook non-athletes.

"If sports aren't your thing, it's just another thing that will get you interested in being a fit person," she said.

The program totals about nine hours of gym class every two weeks, she said.

Money for the new gym came from the school's centennial campaign to raise $36 million for improvements, she said.

The first game in the new gym will take place Friday night. On Wednesday morning, workmen were adding finishing touches, including wiring shot clocks for basketball nets and painting stairwells.

A Pragmatic Approach to A Trillion Trees
By Sherry Listgarten | 1 comment | 2,490 views

The University of California’s flexible policies during COVID-19
By John Raftrey and Lori McCormick | 6 comments | 1,910 views

Repairing a Disagreement with your Beloved & “Physical” vs. “Social” Distancing
By Chandrama Anderson | 0 comments | 1,270 views