Vikings score with 13.6 seconds to play to shock top-seeded Bears, 14-7 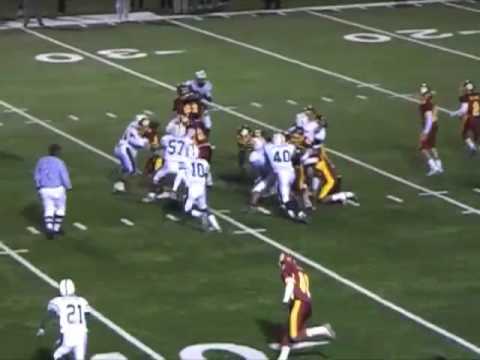 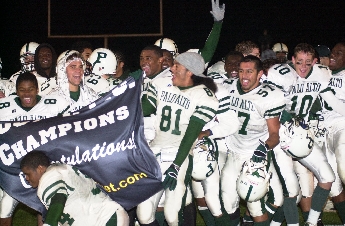 The third-seeded Vikings (11-2) shut down the high-powered offense of the top-seeded Bears (11-2) in the second half to win their second straight CCS title and finish the season with a nine-game win streak. Menlo-Atherton, looking for the second section crown in school history, saw its nine-game winning streak end.

"I expected to win," said Palo Alto coach Earl Hansen, who had a bucket of water dumped on him despite the frigid weather conditions. "I thought we were the better team. We played a much harder schedule. I felt our guys were very well prepared for this game."

Menlo-Atherton came in averaging 38.9 points a game and beating teams by an average of 24.6. The Bears boasted a huge, veteran offensive and defensive line that averaged 280 pounds.

"They were huge and intimidating, but our defense did an unbelievable job," said Paly safety Will Holder.

Holder was just one of many Paly defensive standouts as he blocked a 30-yard field goal attempt by M-A in the second quarter after the Bears had gotten to the Vikings' 8. Linebackers Donnie Salas, Jordan Jefferson and James McCollough also were key members who limited the Bears like no other team had this season.

That, however, didn't come as a surprise to Hansen. His team entered the contest having allowed an average of 7.9 points a game during its seven-game win streak, which included three shutouts prior to the CCS finale.

That scoreless streak stretched to 15 quarters when Palo Alto and Menlo-Atherton played to a scoreless first half and a scoreless third period.

The Vikings scored first, in the fourth quarter, after the Bears' Jamal Wilkins fumbled and Paly recovered on its own 28. The Vikings then put together a 15-play drive, capped by a three-yard run by McCollough with 9:53 left in the quarter. The Vikings had a fourth-and-one at the M-A 5-yard line and went for it, with Brandin sneaking two yards to set up the TD.

Menlo-Atherton answered Paly's touchdown, as Will Latu took the kickoff back 37 yards. Nine plays later, Bears' quarterback Troy McCabe found tight end Matt Mosher open in the back of the end zone for a five-yard score and a tie game at 7.

Palo Alto got the ball back with 5:59 left in the game and promptly began moving toward perhaps a game-winning field goal.

Senior Mike Martin kept the drive alive with a 12-yard reception for one first down and McCollough raced 12 yards for another first down.

The drive stalled at the Menlo-Atherton 41 with 1:49 left to play, leaving Paly with a fourth-and-13 situation. Brandin, however, threw to Jordan Jefferson for a 13-yard gain and Paly had life at the Bears' 23.

McCollough picked up nine yards in two carries before Brandin found a leaping Scott in the left corner of the end zone, with Scott making an acrobatic catch for the winning score.

Scott took advantage of single coverage after having two defenders on him throughout the game.

"I thought it was crazy they didn't double cover him," Brandin said. "I just threw it up there; that was all Mike Scott."

Menlo-Atherton got the ball back, but McCabe threw his second interception (picked off by Paul Brown) as the gun sounded.

Palo Alto's defense was the difference, shutting down the Bears' vaunted attack. M-A rushed for just 44 yards in the second half and finish the game with just 135 on 30 carries after averaging 260 yards prior to Friday's game.

"Our defense play great, no question about it," Hansen said.

As for his team's 11-2 season, just one year removed from going 12-2 and reaching a CIF state championship game?

McCollough, who also stood out at his linebacker position, led the Vikings' running game with 108 yards on 21 carries. Paly rushed for 155 yards and Brandin was a very efficient 16 of 24 (with two interceptions) for 164 yards. Scott caught six passes for 63 yards and Jefferson caught five for 44.

Menlo-Atherton's Latu, who gained over 1,500 rushing yards this season, was held just 87 yards -- only 30 in the second half. McCabe, who threw for more than 2,000 yards this season, also was held in check with 12 completions for 135 yards with two interceptions.

Awesome coverage...thank you. Just got in from a night out and was so happy to see the newly posted score. GREAT job Keith Peters....

!!!!!!!!! Missed the game because I was on a business trip to Canada. Thanks for letting those of us who had to be far away how the game turned out. WTG Paly! Awesome season. A special shout-out to #80 the "Mad Dog".

Great job Vikings! Congratulations to Coach Hansen for a great season and a great game. So what happens now? What's involved to get onto the road to the state championship game? Can anyone explain? Thanks!

Palo Alto's football season ends at 11-2. Because the Vikings did not compete in the CCS Open Division, they are not eligible for consideration to compete in the state playoffs. A handful of the players like Mike Scott and Jordan Jefferson now can start playing basketball.

There was an announcement at the game that, in the event of a tie, both teams would be declared co-champions of the CCS (large school division), but that the game would continue to dertime which team would have consideration for the state tournament. The state tournament is determined by attendance. Paly is in Division II; Oak grove, the winner of the Open division is in Div. I for state. If Paly had had a perfect record, it is my understanding that they would have had consideration for state in Div. II. Am I confused?

Report Objectionable Content
Email Town Square Moderator
2 people like this
Posted by steve san jule
a resident of Fairmeadow
on Dec 1, 2007 at 12:47 pm

hey, congrats to earl hansen. still remember him from the ol wilbur days. and , keith peters. will turn out to be a sports writing legend....unlike the infamous dick o conner. nice to see two names from the past making huge contributions to the palo alto sports scene.

If Paly had a perfect record the, yes, it would have a chance. But, a team from the East/North Bay (maybe Cardinal Newman, not sure) is in line for the state berth for Division II. Just like De La Salle most likely will get the Division I berth ahead of Oak Grove. I'm not real familiar with the Division II teams outside of the CCS, but I know that Palo Alto is not being considered for a state berth in Division II. There's probably a message board at www.norcalpreps.com that has all the possible teams being considered for the state playoffs. Hope this helps.

I think the two teams in line for State Div II berth would be Novato and St. Mary's (the other was Del Oro of Loomis, but they lost in the SJS Div II title game to Granite Bay the other night); St. Mary's won a section title, while Novato is 12-0 headed into the NCS 2A championship game. According to calpreps.com, Foothill of Palo Cedro (Northern Division) could also be in line for a State Div II berth. Cardinal Newman is vying for a Division III spot I think, where they were placed last year, but it seems they may get passed over for Central Catholic.

Joe: Cardinal Newman is in Division III...you pretty much have the Division II teams figured out. Novato is a likely choice for Division II, since they were bumped by Paly last season despite having an undefeated record.

Great job Vikings! Congratulations to Coach Hansen for a great season and a great game. So what happens now? What's involved to get onto the road to the state championship game? Can anyone explain? Thanks!

Singapore's oldest cafe was about to open in Palo Alto. Then, the coronavirus hit.
By Elena Kadvany | 2 comments | 4,776 views

A Pragmatic Approach to A Trillion Trees
By Sherry Listgarten | 4 comments | 4,136 views

Repairing a Disagreement with your Beloved & “Physical” vs. “Social” Distancing
By Chandrama Anderson | 2 comments | 2,813 views

The University of California’s flexible policies during COVID-19
By John Raftrey and Lori McCormick | 6 comments | 2,710 views