Gunn and Castilleja girls both grab 11th in their respective divisions 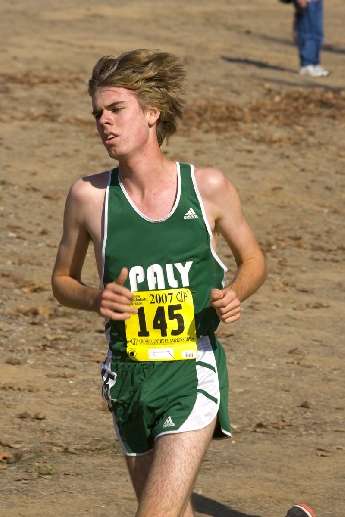 Palo Alto sophomore Philip MacQuitty was among the top five runners in Division II, but ran out of gas late and finished 11th at the CIF State Cross Country Championships last Saturday in Fresno. Photo by Don Gosney.

It has been said that beating a team or individual three times in one season is difficult to do. Palo Alto's Philip MacQuitty would have to agree.

On Saturday, the two sophomores lined up against each other at the CIF State Cross-Country Championships at Woodward Park in Fresno. This time, three was a charm for Rowe as he beat MacQuitty and finished fifth overall in the boys' Division II race in 15:41 over the 5,000-meter layout.

The Gunn and Castilleja girls, meanwhile, both ran well in the team competition. The Titans finished 10th while the Gators took 11th in their respective divisions.

The Division II Titans were once again led by freshman Jackie Evans, who finished 23rd overall in her first state meet in 18:52. She was the No. 4 runner from the CCS but the fastest freshman in the race.

In the Division V girls' race, Castilleja finished 11th with senior Sonja Swenson leading the way in 27th in 20:04. She was the first CCS finisher. The second CCS finisher was Woodside Priory freshman Devon Errington, who clocked 20:13 for 33rd overall. At the CCS finals, Errington won with Swenson second.

The other local CCS team competing was the Sacred Heart Prep boys, who took 17th out of 22 teams. Senior Alex Navarro led the Gators with a 65th-place finish of 17:41.

Here's a story that focuses on the two runners from Palo Alto High School, MacQuitty and Avis, who ran at States Saturday: Web Link.

Here's a story that focuses on the Paly girls' co-captain, Elizabeth Scott, who is aiming to qualify for the state meet this year.
Web Link

Posted by Name hidden
a resident of Juana Briones School

Can you stay healthy without making more trash?
By Sherry Listgarten | 7 comments | 3,339 views