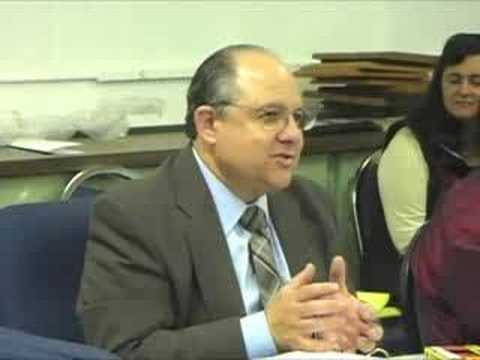 Opening a specialty high school in Palo Alto is a neat idea -- but the pace of rising enrollment means the school district doesn't have time to design one, said a study group on Wednesday. Instead, the district should expand existing alternative programs or add more, said members of the district-appointed High School Task Force.

The decision was the study group's first.

"We have just reached our first consensus," said Sandra Pearson -- a group co-facilitator and former Palo Alto High School principal -- sparking a round of applause.

There won't be enough students for at least five years to need to look at another comprehensive high school, Skelly said in meetings with the high-school principals, group facilitators, and Assistant Superintendent Scott Laurence, who acts as the group's district liaison.

Instead, the task force should focus on programs to help the 20 to 30 percent of students who don't thrive in the comprehensive setting, Skelly said.

The Board of Education approved the focus change this fall and the group began studying alternative programming, including a small, specially focused school.

During its Oct. 10 meeting, the task force's Co-Facilitator Burton Cohen had described his experience forming a specialty school near Minneapolis.

Cohen's School for Environmental Studies has been very successful -- but it took five years to conceive, design and implement, he said in the last meeting.

This week, group members were asked to weigh in on whether such a school could work in Palo Alto.

"You said it took five years to come up with the concept," said Suzanne Attenborough, a Palo Alto High School site-council member and PTSA representative. "But we don't have five years before we have 500 students."

The district's enrollment grew by 235 students this year, according to numbers released after the 11th day of school.

There won't be time to conceptualize a special school before the group's winter deadline for presenting findings, Cohen agreed.

Other concerns were jotted on note-cards and posted on a board.

"Expensive to build," one card read, a worry echoed on several others.

"How could the Palo Alto population come to a consensus about the type of specialty school," another card asked.

Yet comments also highlighted positive aspects of such a school.

"Choice for students," praised another.

"There are a number of concerns, not the least of which is timeline, that compel us to put it in the parking lot," said Paly teacher Ron Williamson.

The task force will next examine current alternatives, with an eye on which to expand.

That allotment should be higher, Zepecki said: "We'd like to see it expanded."

The group may also brainstorm new programming in the coming months.

Introducing a school-within-a-school could retain some of the focus of a specialty school without the commitment needed to create one from scratch, said Marion Krause of the Palo Alto Educators Association.

"If we started a school-within-a-school that could eventually be the nucleus of a special school, it could be its own impetus as more and more students come," she said.

At its Oct. 24 meeting, the group will look more at non-traditional options, including the Middle College partnership program with Foothill College. Meetings are at 6 p.m. at the district office at 25 Churchill Ave.

Like this comment
Posted by Parent
a resident of Another Palo Alto neighborhood
on Oct 18, 2007 at 3:39 pm

I am now confused!!

It looks like we already decided to have schools within schools. Where are they?

7 people like this
Posted by Circle of Life in Palo Alto
a resident of Another Palo Alto neighborhood
on Nov 2, 2015 at 1:27 pm

Right, nothing ever gets done--no schools open, no schools close.

Only the district did close a third of its elementaries, Jordan, Terman and Cubberley. It then later reopened Jordan and Terman.

In between, it discussed a lot of stuff.

Nothing-ever-changes is a short-term view of the district, where, in fact, things do change.

These local restaurants are donating meals to Bay Area residents in need. Here's how to help.
By Elena Kadvany | 6 comments | 10,842 views

Coronavirus: Plan ahead now for a big outbreak
By Diana Diamond | 18 comments | 3,914 views

Will the Coronavirus Save Lives?
By Sherry Listgarten | 29 comments | 3,738 views