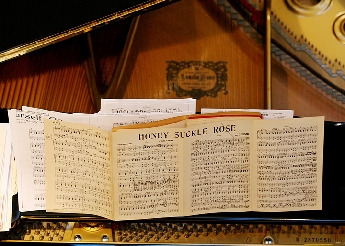 Frederick Hodges wears his cornsilk-blond hair parted neatly in the middle, 1920s-style. When someone talks, he listens, really listens, as polite as a student winning a medal for deportment. An old-fashioned gentleman is a rarity these days.

The parlor piano sing-along is a bit out of style, too. But if Hodges has anything to say about it, the music of bygone days won't be a lost art.

In a bustling Bay Area of software engineers and biotech firms, Hodges is a pianist immersed in the '20s, the '30s and the ragtime age. His dance card is full of rehearsals and ragtime festivals, concerts and private shindigs. This Sunday, he'll play with the California Pops Orchestra in Palo Alto.

Hodges could have been a classical concert pianist, but he got stuck on a stack of period tunes he found in his grandmother's piano bench.

"It's the only music I've ever loved deeply," he says. "It's full of vitality, life, humor."

At the moment, the Berkeley pianist is contentedly skipping from tune to tune on a grand piano in the Palo Alto home of Kim Venaas and Alicia Wilmunder. The two are the musical power couple of the California Pops; Venaas is the conductor and musical director, while Wilmunder is executive director and cellist.

As an amused Wilmunder looks on, Hodges and Venaas banter like the wind about everything from Fats Waller to the 1939 Academy Awards. They take turns singing and playing the piano, and Venaas keeps jumping up to grab another piece of vintage music from a closet or shelf.

With military posture and dancing fingers, Hodges plays the original 1929 arrangement of "Honey Suckle Rose," then "Let's Call The Whole Thing Off," then "It's De-Lovely." Gold buttons gleam on his dark blazer.

"These songs were so good that they're still good," Hodges says. "They're called 'standards' for a reason."

"You can play 'em on the ocarina and they'll still be good," Venaas chimes in, then announces, "I have a matched set of four (ocarinas) upstairs."

"Dance to the music of the ocarina," Hodges half-says, half-sings, quoting an Irving Berlin song.

The conversation focuses on one decade: 1927 to 1937. That's the era that Hodges and the Pops will bring back to life this Sunday, in their "Gershwin & Friends!" concert. Gershwin tunes will dance cheek to cheek with songs by Cole Porter, Irving Berlin and other contemporaries. Many songs will come from the orchestra's "Save the Music" project, in which Venaas and the Pops are collecting and performing old printed music that would otherwise be thrown out by estates, schools and other organizations.

The orchestra has a new moniker this season; it was formerly known as the Peninsula Pops. Venaas hopes that's a sign of major doings to come. While the Pops have five big programs at Spangenberg Theatre this season, Venaas is thinking more broadly. He dreams of having the Pops regularly play Palo Alto, San Francisco, Marin and the East Bay, or of being the house orchestra at Stanford's Frost Amphitheatre.

The orchestra has traditionally earned its revenue through ticket sales; now Venaas and Wilmunder are planning a fundraising and outreach campaign to expand the group and find a larger audience.

"I'm not trying to convert hip-hop devotees. I'm just trying to find (more) people who love this music," Venaas said. "My dream ... is that when Tony Bennett comes to town, his choice is for the Pops to back him up."

As for Sunday's concert, it marks Hodges' debut with the Pops, although he has played with Venaas' 19-piece big band, the Black Tie Orchestra.

Venaas praises Hodges especially for his improvisational skills. In much of the music of this period, composers expected pianists to add their own notes and chords, further fleshing out the written music, Hodges says.

"It's all improvised on the spot. Maybe there's a quiet spot, and you add a 'bell,'" he says, lightly playing a high chord on the piano.

To further demonstrate, Venaas plays a song as written, serviceable but spare. Hodges then takes the bench and plays his own richer version of the same tune, new notes spinning and splashing out of the clear blue.

"With Frederick, you look at the page (of music) and he fills in the white space," Venaas says.

As a full-time musician, Hodges works in plenty of practicing and driving to gigs, along with performing. Much of his time is devoted to learning fresh music; he says he'll never run out of vintage songs. For example, for each ragtime festival he plays, he learns 40 to 50 new numbers.

"These are old pieces, but they're new to me. So much music was published back then: hundreds of songs every week," he says. "So many songs back then were wonderful, but not every song could become a hit."

Hodges' insatiable sheet music collection, built through the grace of auctions and eBay, will never be complete. His eBay "watch list" rarely dips below 100 pieces of music. At the moment, he's longing for an original edition of George Gershwin's "Swanee" -- the one that was introduced at the Capitol Theatre on Broadway in 1919, he's quick to specify.

Despite the live-wire speed of his playing, Hodges says he doesn't do anything special to keep his hands in shape. When asked whether he's had any repetitive-stress problems, he looks surprised, then amused. Indeed, the words "carpal tunnel" seem sort of modern and silly next to the timeless lines of a 9-foot grand piano.

"Playing the piano is good for your fingers," he says, then adds mock-seriously, "We who play Gershwin stay young and healthy, our fingers supple and dexterous." It sounds just like a song.

What: "Gershwin & Friends!" a concert of music from 1927 to 1937, by Frederick Hodges and the California Pops Orchestra.

A Pragmatic Approach to A Trillion Trees
By Sherry Listgarten | 4 comments | 3,986 views

Singapore's oldest cafe was about to open in Palo Alto. Then, the coronavirus hit.
By Elena Kadvany | 1 comment | 2,976 views

Repairing a Disagreement with your Beloved & “Physical” vs. “Social” Distancing
By Chandrama Anderson | 2 comments | 2,679 views

The University of California’s flexible policies during COVID-19
By John Raftrey and Lori McCormick | 6 comments | 2,625 views