From chicken dances to acts of kindness, Paly's choristers mix a lively blend of music and community 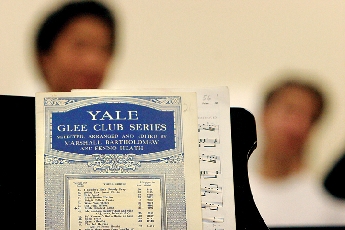 The Spectrum Singers, a women's ensemble at Palo Alto High School, is sounding wonderfully melodic and rhythmic as its student members rehearse an a cappella version of "O Dear What Can the Matter Be."

But something is the matter. Some of the high notes are pinched.

Since this is a class, choral director Michael Najar asks other members of the school's Concert Choir to provide constructive criticism. Tenors, basses, altos and sopranos chime in:

"The blend is very nice."

So Najar takes emergency action. "It's time to try the threat," he said, flapping his elbows up and down. "Can I get a little chicken?"

Strutting like preening parrots, the women giggle out of control. So do their young critics, seated on the floor of the rehearsal room. But then something magical happens. The chicken gets them cooking. The tones get smoother, clearer. The class applauds.

Later, Najar gives the men a chance to be goofy, asking them to recite "Mary Had a Little Lamb" in robotic voices with a metallic ring. But there's method in his madness. It's all about learning to sing in a resonant voice. Plus, singers can't produce good tones if they're tense.

Najar's approach may be unorthodox, but it's all in an afternoon's work for the 50-voice Palo Alto High School Concert Choir, a mixed-voice advanced chorale with smaller ensembles under its rubric: the Spectrum and Madrigal Singers, directed and auditioned by Najar. Some members also sing with the Heartbeats, a women's quartet auditioned and run by students. Many of the men are also part of the Viking Chorus, a glee club run by Najar that practices outside of class hours. The groups are a harmonic blend of cultures, ethnicities and interests.

"We're all kind of a team," says choir president Jasmine Mark, who heads to U.C. Berkeley in the fall, where she plans to study psychology as well as continue singing.

Certainly psychology helps create harmony. Between having the choirs practice arrangements from Johannes Brahms to Paul McCartney, Najar builds in time for sharing jokes and "conscious acts of kindness."

One guy relates that while crossing the Dumbarton Bridge over the weekend, he paid the toll for the car behind. A young woman laughs as she describes asking permission to remove a caterpillar from the head of a bald bystander. She still can't believe she did it.

Having fun with music doesn't mean taking it lightly. During spring break, 26 members traveled south to compete in the Anaheim Heritage Festival and came back with several awards: a first place Gold Award in Division 2A (medium-size schools) and an outstanding choral group award for the Concert Choir, as well as another gold for the Spectrum Singers.

Then in early May, following concerts at Stanford Memorial Church and St. Mark's Episcopal Church in Palo Alto, the singers competed before the California Music Education Association (CMEA) in Hayward. The Concert Choir, Madrigals and Spectrum Singers received "Unanimous Superior Ratings" in both performance and sight-reading. At the St. Mark's concert, students showed off those skills, performing a classical piece in four-part harmony moments after looking at the sheet music for the first time.

They've also taken their music on tour. Last summer the group traveled to Brazil, and in 2004 to Spain and France, singing in Paris' legendary Madeleine Church. Next year, the tentative plan is Turkey and Greece.

There are also big plans closer to home. On May 30, the Concert Choir will head to St. Mark's to make its first CD, "The Green Album," slated for release this summer. Najar is already taking advance orders.

The group is also scheduled to sing June 10 at the Baccalaureate Service at Memorial Church.

Gunn High School's 100-voice chorale, which performed High Mass last summer at St. Peter's in the Vatican during a tour of Italy, has also sung in Australia and in England, and the Gunn High School choir has received 16 Unanimous Superior Ratings from the CMEA, according to the school's Web site.

Najar, who joined the Palo Alto faculty four years ago, doesn't like to compare his choir to that at Gunn, which is "twice our size."

"I think of us as a boutique choir," said Najar, who is also a composer as well as an operatic tenor and self-described "ex-bass."

Most of the choristers work their way up from Beginning Choir, where they learn the fundamentals, to the auditioned Concert Choir and its ensembles. Najar directs five choirs at the school and teaches theory.

Graduation doesn't mean the music stops. Quite a number of Paly singers plan careers in music. Alumna Mary Hewlett, now a music education major at Vanderbilt University, recently came in to help, working with the women. "I loved singing in this choir," she says. "It's such a nurturing environment. It made a great impression on me."

Meanwhile, senior Arunima Kohli conducts the men in a sectional rehearsal. "I'm taking a teaching practicum, learning to be a conductor," she says. She also sings with the Madrigals and the Heartbeats.

And in the fall? "I'll be right down the street, at Stanford."

Although he began piano at age 8, he didn't sing with his high school choir until junior year, persuaded by his mother, a Concert Choir and Madrigals alumna. At a recent concert, Brown played the Madrigals king in full Renaissance regalia, reciting "Let's Get Physical," among other ditties, as if they were Elizabethan odes.

Najar has told parents that sons might be worth good money to a prestigious college, which is why Irvine offered Brown a monetary bonus. "Colleges kill for good male singers," he says.

A good first tenor is always in high demand. Senior Andrew Proudian, who sings with animation and precision, has been doing choral singing for more than 10 years, since he was a student at the Nueva School in Hillsborough. After graduation, he plans to take a year off, looking for local singing opportunities and perhaps assisting Najar before going on to college.

"The strength is our blend," he says. "Everything locks in together. Our tone is really good."

Ilana Mark, mother of choir president Jasmine, and the parent volunteer coordinator, agrees. She's given countless hours to the choir, helping to organize the fall Madrigals dinner, where the costumed students served and entertained 250 guests. Mark is also the interim director of a newly formed parents' group that is helping to support the choir, with both time and money.

After the family moved to Palo Alto when Jasmine was a sophomore, "the choir was an anchoring activity to help her find her place in such a big school," Mark said. "It was something she was very passionate about.

"It was her first opportunity to participate in a choir and get a great music education -- both an education about the pieces and the ability to learn how to read music like a professional singer. She loves the choir. This is a ... unique opportunity to have such an experience in a high school setting."

Info: "The Green Album," the first CD by the Palo Alto High School Concert Choir, is slated to be released this summer. For more information about the CD and the choir, call 650-329-3856 or go to http://homepage.mac.com/palychoirs/ . The Web site for Gunn High School's choir is http://gunn.pausd.org/~choir/ .

I loved this article and all the great photographs. Mr. Najar is an inspirational teacher who loves what he does. The students respond to him and his teaching methods and create beautiful music together. It's wonderful to read articles in the Weekly that portray a positive image of high school students.

I am glad that Mr. Najar has finally had a chance to recieve the appreciation that he deserves for all that he has done for paly and play choirs. I am very proud of our choir and all that we have achieved in the past year becuase of his help. Thank You, Mr. Najar.

This is really a very nice description of the focus, art, love for music Mr. Najar develops in these students.
The pictures and video are so well done by Marjan Sadoughi (We hope to see many more "articles")

What a fantastic tribute to a terrific program. It's been a great year to be involved with the choir -- I only wish my daughter had joined sooner than her senior year!

I had a great time chaperoning the choir's trip to the Heritage Festival and Disneyland at the end of March. It was a thrill to hear them perform, and to see them haul home a huge pile of trophies.

Here are a few (admittedly low-quality -- the video, not the performance!) videos of Paly choir performances up on YouTube. I apologize in advance for the clips from the Valentine's concert; somehow the digital camera's audio and video got out of sync after being uploaded to YouTube. They play fine on our home computer.

The concert choir, featuring the tenor section, singing, "Is She Really Going Out With Him?" at the Valentine's concert. Web Link

The combined choirs (80 singers!) sing "Betelehemu" at the end of the Madrigal Dinner, December 2006: Web Link

Part 2 of Betelehemu -- worth listening to for the great ending -- Web Link=.

I have some video of the Spring Concert on the camcorder but haven't converted them to digital files yet. Soon, I hope.

As mentioned earlier on Town Square, I think it would be fantastic if the Weekly started an "Artist of the Week" feature -- akin to the "Athlete of the Week" feature that is a long-running standard in the publication. I've been involved with high school athletics, and see that the artists put as much -- sometimes more -- passion and effort into their singing, dancing, painting, playing, performing as the athletes do.

It is great that the program at Paly is receiving the credit it is due. My son is now a junior at one of the best voice and performing arts programs in the country (Chapman University) and his enthusiasm was kept alive during his high school years by Michael Najar's passion and commitment to growth. Thanks so much, Michael and good luck in the great years to come!!

I graduaded in 1992 with my class I choose from Palo Alto High school but I was in The choir of 1991. and hoping they will be there saturday at one pm. because I have lose 130 pounds in four in half years. from Brita

Singapore's oldest cafe was about to open in Palo Alto. Then, the coronavirus hit.
By Elena Kadvany | 2 comments | 4,960 views