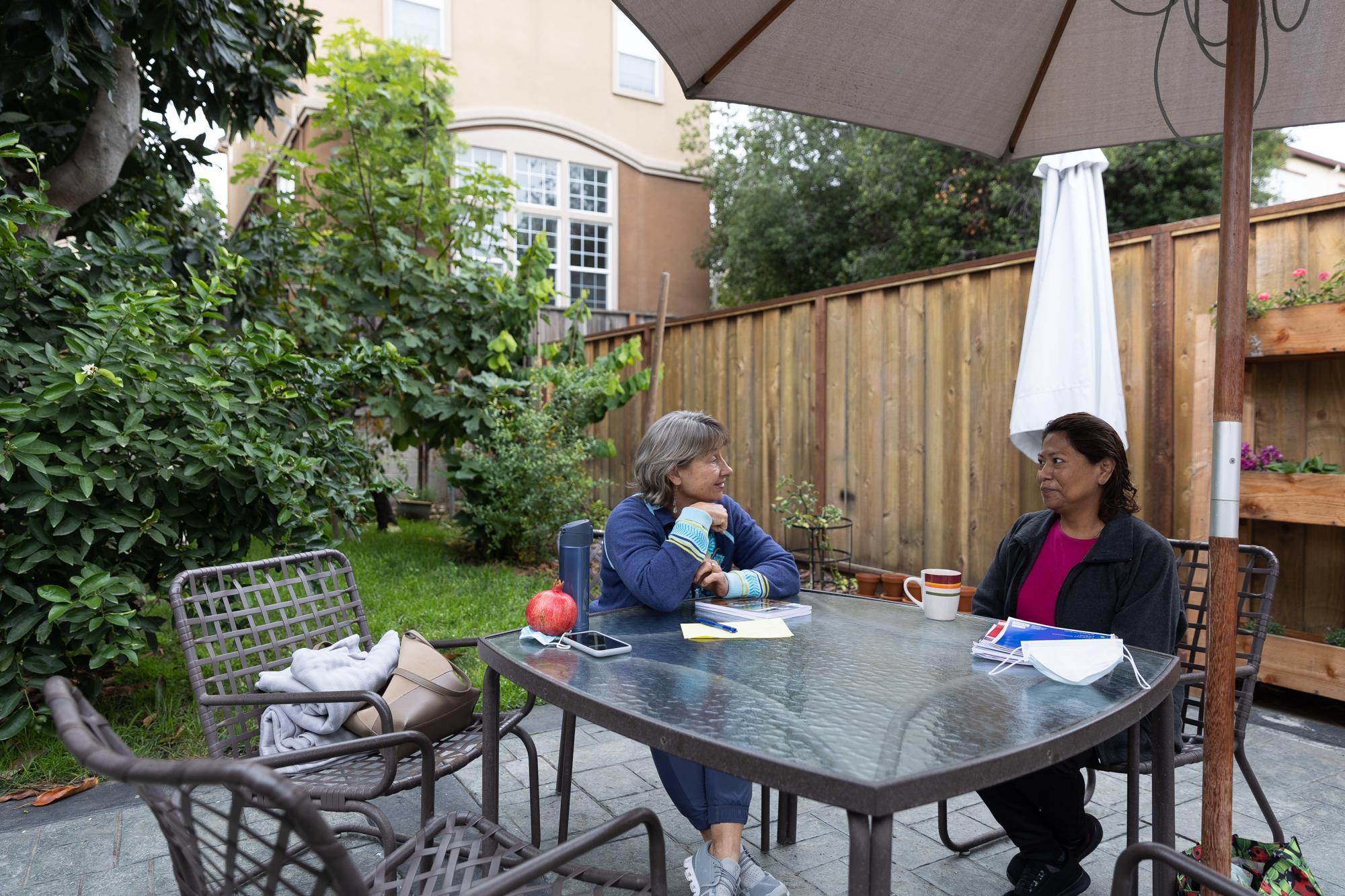 Language partners Susan Stulz and Silvia Monico chat in the backyard of the house the Rosalie Rendu Center operates out of in East Palo Alto on Nov. 16, 2021. Photo by Magali Gauthier.


Where learning English is 'medicine for the people'
Rosalie Rendu Center empowers immigrants by teaching language, acculturation and life skills

Ever since she was a young nun, Sister Trinitas Hernandez wanted to follow the path of Rosalie Rendu, a 19th-century nun of the Daughters of Charity of Saint Vincent de Paul. Rendu had dedicated her life to helping the poor in French slums at a time of great human influx due to the Industrial Revolution. In East Palo Alto, Sister Trinitas has been doing the same.

Small and energetic with sparkly eyes and a keen intelligence, Sister Trinitas joined the charitable order at the age of 18. When she arrived in East Palo Alto in 1997, she was looking for a project that would take her into the community. As in Rendu's time, many new immigrants have come to the Bay Area in search of work and a better life. They often struggle to adapt and to grow into their new community, and a lack of fundamental language skills can keep them in poverty, she noted.

One day a woman asked for help learning English. Sister Trinitas, affectionately called Sister T, said she wasn't a teacher. The woman said that because Sister Trinitas could speak and read English, that was enough. Sister Trinitas gained her first pupil. Twenty-three years later, she's still teaching through the Rosalie Rendu Center , which she founded and leads as its executive director.

The educational center for Latino mothers and families is aimed at breaking the cycle of poverty through English as a second language, life skills and acculturation classes. It serves 90 to 100 people per year through ESL classes, one-on-one conversational English mentorships, educational outings and citizenship classes.

Student Gloria Del Rio said the parents learn how to encourage and support their children through parenting workshops.

"Most of the students are from Mexico and we have a different culture. The sisters help the mothers to learn life here and to get better educated," she said.

Del Rio said the classes have taught her to manage stress and to listen to her children. The camaraderie with other women builds a sense of shared community.

Before arriving at Rosalie Rendu, she wasn't interested in learning English despite having lived in California for many years. There wasn't much incentive since she could get by through interpreters or her children. Then she partnered on school projects with mothers who came to the center, and it changed her life.

"Once I started, I couldn't stop," Del Rio, a dark-haired mother of four, said while sitting at the spacious dining room table at the center's home, located at 2345 Pulgas Ave., East Palo Alto.

Now in her third year, Del Rio speaks English fluently and understands the language without hesitation.

"The teachers are kindly with us. They understand it's a big effort to come here, and some of the mothers work," she said, noting that classes accommodate shifting schedules.

Before coming to the center, Del Rio often held back asking questions at her children's schools.

"I could only say 'My name is Gloria,'" she recalled.

Now she feels more confident and she is an active part of the school community.

"I don't have to ask for an interpreter at the school and at the doctor's now. We don't feel embarrassed," she said. "Before, I was hiding. I just did what I had to do."

Del Rio said the center has helped her become less dependent on her husband and children. With her command of English, she is now free to get what she needs by herself, such as when shopping at the store.

"My family is proud. I'm doing something for me. Maybe it's a good example for them to see me practice. They know I'm here and it teaches them to be brave and be a participant," she said.

Del Rio's example has helped inspire her children to be high achievers. One son attends the University of California, Davis and is studying biochemical engineering; her daughter is studying to be a dentist. Her other two sons are a sophomore and freshman attending Menlo School.

Del Rio has also used her language powers to protect her community and not be a victim.

"Once, there was an ice cream man and I saw two boys were trying to rob him in the apartments. I called the police," she said.

Another time, Del Rio was in a car crash, and the other person left the scene when Del Rio asked to exchange driver's license and insurance information. Del Rio again called the police. Officers traced the license plate number she managed to write down, went to that woman's home and brought her back to give Del Rio the information, she said. Having such language abilities and understanding the system is empowering, she said.

Like its students, the center has gone through its own challenges. In late 2019, just as the pandemic began, the center lost its longtime location at the Carriage Manor Apartments.

Every day, Sister Trinitas prayed, asking God to help her find a new location, she said. One day in spring 2020, she learned that a student named Marina had moved to Nevada to be near her family after her husband's death. She was selling her house and wasn't coming back to East Palo Alto.

"Upfront, I asked, 'Will you sell it to me?' And three weeks later, we signed on the dotted line," Sister Trinitas said. "The good Lord sent us this house. I feel deep in my heart that it is a miracle."

The center moved into its new home in June 2020. Pictures of Sister Rosalie Rendu, resplendent in the white, starched "gull wing" hat, or cornette, for which the Catholic order is known, grace the center's living room walls.

Getting through the COVID-19 pandemic while renovating the house and yard took time and many financial resources and volunteer help. The students needed to know how to download Zoom onto their phones in order to continue learning English through remote classes. The first week was uneven but by the second week things were running smoothly, said program director Maria Lozano.

The center created a remote tutoring program that matches college and high school students to the younger children of the center's parents. The center purchased a three-month subscription to Kiwi Kits, a hands-on science kit, for 22 children, which were delivered to the children's homes, with classes continuing on Zoom this school year.

StreetCode Academy, another East Palo Alto nonprofit organization, lent the center laptops to meet all of the student's needs. The center's volunteer computer teacher downloaded software on the laptops, put together an instructional video and helped students connect to their home internet networks.

Rosalie Rendu Center has provided emergency funding to families for food and rent who were without jobs due to the pandemic. It also contracted with One Life Counseling Center to offer counseling services to parents who need professional support and who are facing housing, health and jobs challenges during the pandemic, Lozano said.

The center used its $5,000 Palo Alto Weekly Holiday Fund grant to purchase indoor and outdoor furniture and accessories and classroom items for the new location and for equipment and a daily cleaning service to keep the center sanitized against COVID-19.

Recently, student Silvia Monaco and volunteer Susan Stulz sat at a backyard table in the verdant garden conversing mostly in English. The one-on-one conversation sessions are beneficial to both women. Stulz, of Los Altos Hills, wanted to learn Spanish, while Monaco needed to improve her English to get a better job.

A hospital nurse in her native El Salvador, she now works in Bay Area senior congregate care communities. Finding a job has sometimes been difficult because she didn't speak English well, she said, and part of caring for any patient involves communication.

As a hospital nurse, gently touching and talking to patients, together with medicine, helps them to heal faster, she said. Not speaking English restricted her powers as a healer — something she hopes to remedy.

"The medicine for the people is language," she said.