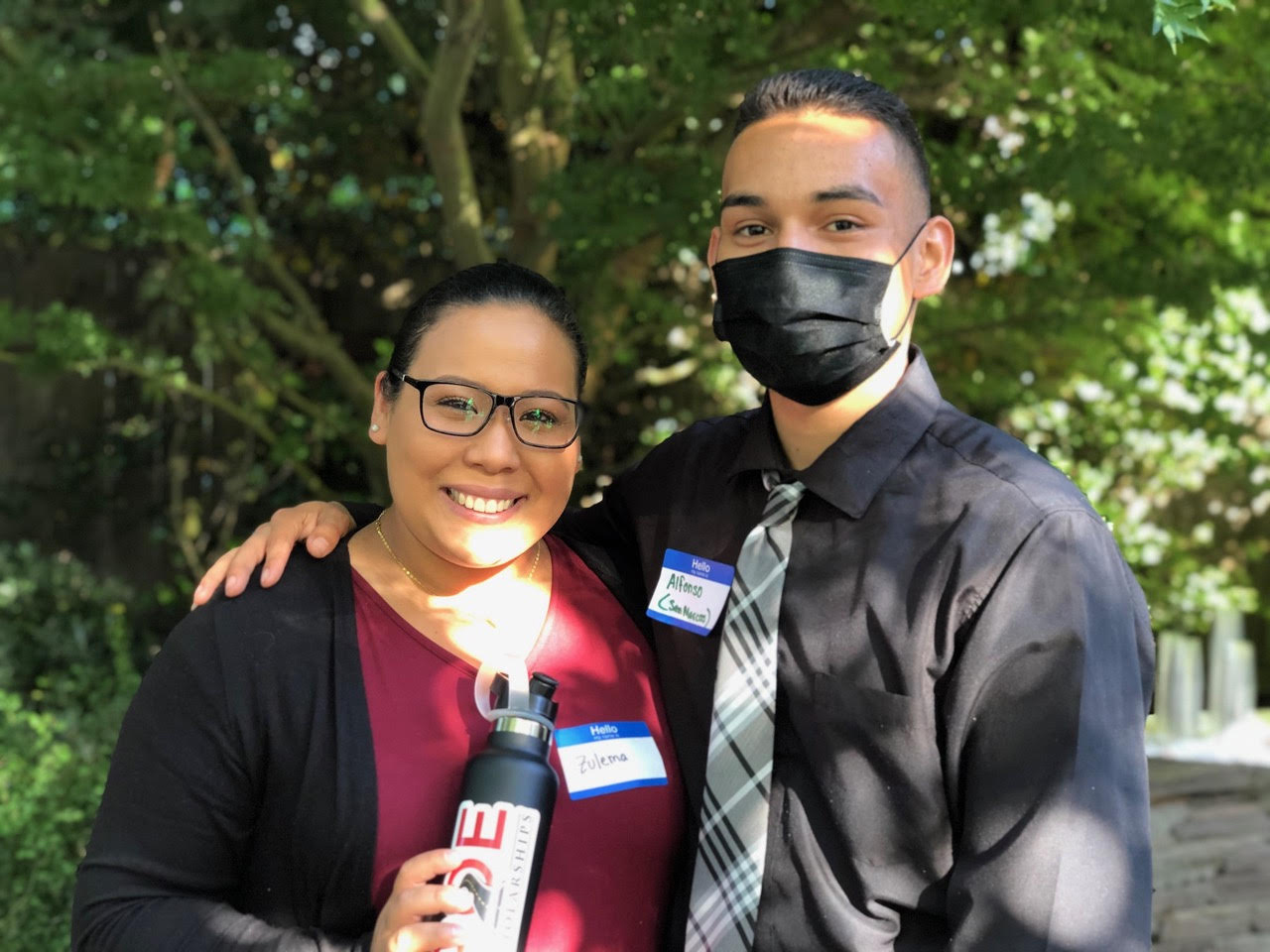 Zulema Garibo is among the nearly 700 students who have been awarded a college grant from the nonprofit Pursuit of Excellence since Palo Altans Richard and Marjorie Smallwood launched the program in 1985. Courtesy Carol Mullin.

The likelihood of Zulema Garibo going to college seemed pretty slim: English was not her native language. No one in her family had ever attended college. And her status as an undocumented immigrant meant she was ineligible for federal student aid and other scholarships.

"I always had that dream of being able to graduate college. My parents put it in our heads that we came to this country to have a better life," said Garibo, who moved to the Midpeninsula with her parents and two siblings from Mexico when she was 6 years old.

Despite the roadblocks, Garibo refused to give up on her dream. When high school teachers told her advanced English classes would be too challenging for her, she enrolled in advanced science and math classes and showed them she could succeed. She stayed in the classroom during lunch and after school to hone her language skills and did whatever she thought needed to be done to improve her chances of being accepted to college.

But even with a 4.1 GPA, she said college seemed as if it would be an impossibility if she couldn't afford the tuition.

During her senior year at Woodside High School, Garibo learned about Pursuit of Excellence , a Palo Alto nonprofit that awards scholarships to financially needy students from Peninsula high schools. She jumped at the chance to apply and was able to enroll at the University of California, Santa Barbara, right out of high school. Through the program, Garibo received $30,000 in grant money distributed over the years she was an undergraduate student to help defray annual tuition costs.

"Pursuit of Excellence definitely gave me the motivation and extra support that I needed. They were there for me emotionally and financially the entire time," Garibo, now 25, said during a telephone interview in mid-December after wrapping up final exams at the University of Southern California, where the second-year graduate student is earning her master's degree in teaching. She plans to become an English professor.

Garibo is among the nearly 700 students who have received grants from Pursuit of Excellence (POE) since Palo Altans Richard and Marjorie Smallwood launched the program in 1985 with a single $2,000 scholarship awarded to a graduate of Sequoia High School.

Over the past 36 years, the nonprofit has distributed approximately $7 million in scholarships — all raised through private donations — to students from 14 high schools on the Midpeninsula, including Gunn and Palo Alto high schools, Eastside College Preparatory School, East Palo Alto Academy and five high schools in the Sequoia Union High School District, as well as students from its chapter in Washington, D.C.

Because POE is an all-volunteer organization, 98% of donations go directly to students, said the Smallwoods' daughter, Carol Mullin, who stepped up as president of POE in 2010.

Mullin said the program's goal is to help motivated but underserved and financially needy students, many of whom are first-generation college applicants, earn a degree by providing them between $500 and $8,000 in financial aid every school year until they graduate.

The program targets high school seniors for whom the funds can be a "tipping point" in their ability to attend school, she explained. Preference is given to students who needed to work during their high school years.

"We're not trying to jump on the bandwagon for the kid who has a 4.0, who's going to an Ivy League, who everybody knows is going to be a great success because we know we're not going to make a difference there," Mullin said. "We're looking for students who really demonstrated motivation and (financial) need, and maybe they haven't done as well in school because they're working 20 hours a week. Maybe they have a 3.2 grade point average or a 2.8 grade point average, but they would have had much better grades if they hadn't been helping support their families."

Along with financial aid, each student is provided with a mentor as well as access to enrichment opportunities, such as workshops and internships. Grant money is adjusted annually to fill any financial gaps in college expenses that a recipient might experience. Mullin said the program does not cover personal expenses, which students are expected to cover through work.

Mullin said once a student is accepted into the program, they're in it until they graduate.

Mullin said POE's graduation rate has been about 88% to 90% over the past few years, compared to the national average for lower-income, first-generation students of 21%. (These rates are based on students who have earned a bachelor's degree within six years.)

Mariela Lopez, a POE recipient from Woodside High School who graduated from the University of California, San Diego with a bachelor's degree in behavioral neuroscience last spring, said having access to a mentor is a huge benefit, especially for first-generation students trying to navigate an unfamiliar process.

"So many students are just so much more prepared. ... Their parents went to grad school and have a master's or Ph.D.s, so they know exactly what classes they need to take and why," said Lopez, who moved from Mexico to Redwood City when she was 15 years old and became the first in her family to attend college in the United States. "That's the hardest part. Nobody tells you that you need to volunteer or do any leadership positions if you want to go to grad school, or what happens if you drop out of class.

"I knew my parents weren't a resource, not because they didn't want to be but because they had no idea what goes on (in college) in the United States. So I would usually talk to my mentor, and she'd give me advice. She'd say, 'Yeah, that sounds great,' or 'Maybe don't do that.'"

Lopez is now working toward her Ph.D. at the University of Pennsylvania.

For Garibo, the support of Mullin and her mentor, Tracy, was invaluable. She said that she might not have advanced beyond her first semester of college if not for their ongoing encouragement.

Shortly after enrolling at UC Santa Barbara, Garibo said she had an unplanned pregnancy and was prepared to drop out of school.

"It was all going downhill. I felt so embarrassed to reach out to Carol and Tracy," she said.

But they're response surprised her.

"They said, 'Don't stop going to school. Just because you got pregnant doesn't mean that we're going to stop offering you help. We're here for you the entire time, whether it takes you four years, five years or six years. The goal is that you finish.'

"Those words are forever in my heart because that's what I needed to hear once again in order for me to keep pushing and going through with college."

Garibo moved back home, attended community college and then transferred to San Jose State University, where she graduated in four years. She is now paying her own way for online graduate school courses through a student loan.

Since the pandemic, Mullin said POE has made several changes to address some of the unexpected challenges that have popped up.

Within the first two weeks of the shutdown, POE used its endowment to set up an emergency COVID-19 relief fund, which included a $20,000 grant from the Palo Alto Weekly's Holiday Fund , to help students "with anything that was affecting them at all college wise" get through this situation, she said.

The emergency fund was used for food, rent, 28 computers and iPads for online learning and other necessities that made it easier for students to stay in school, she said.

If a student, for example, was going to have to drop out of school to help pay rent because their parents lost their jobs, then the nonprofit assisted with rent, she explained.

She said POE is currently working on expanding its internship program to provide more job placement opportunities with local companies.

Mullin said despite the challenges brought on by the pandemic last year, POE didn't see a single student drop out of the program. The organization accepted 36 students and saw another 36 students graduate, including 26 who had earned their degrees within four years, she said.

"I feel like our students are super resilient. ... They just keep going. (It's) impressive," Mullin said.