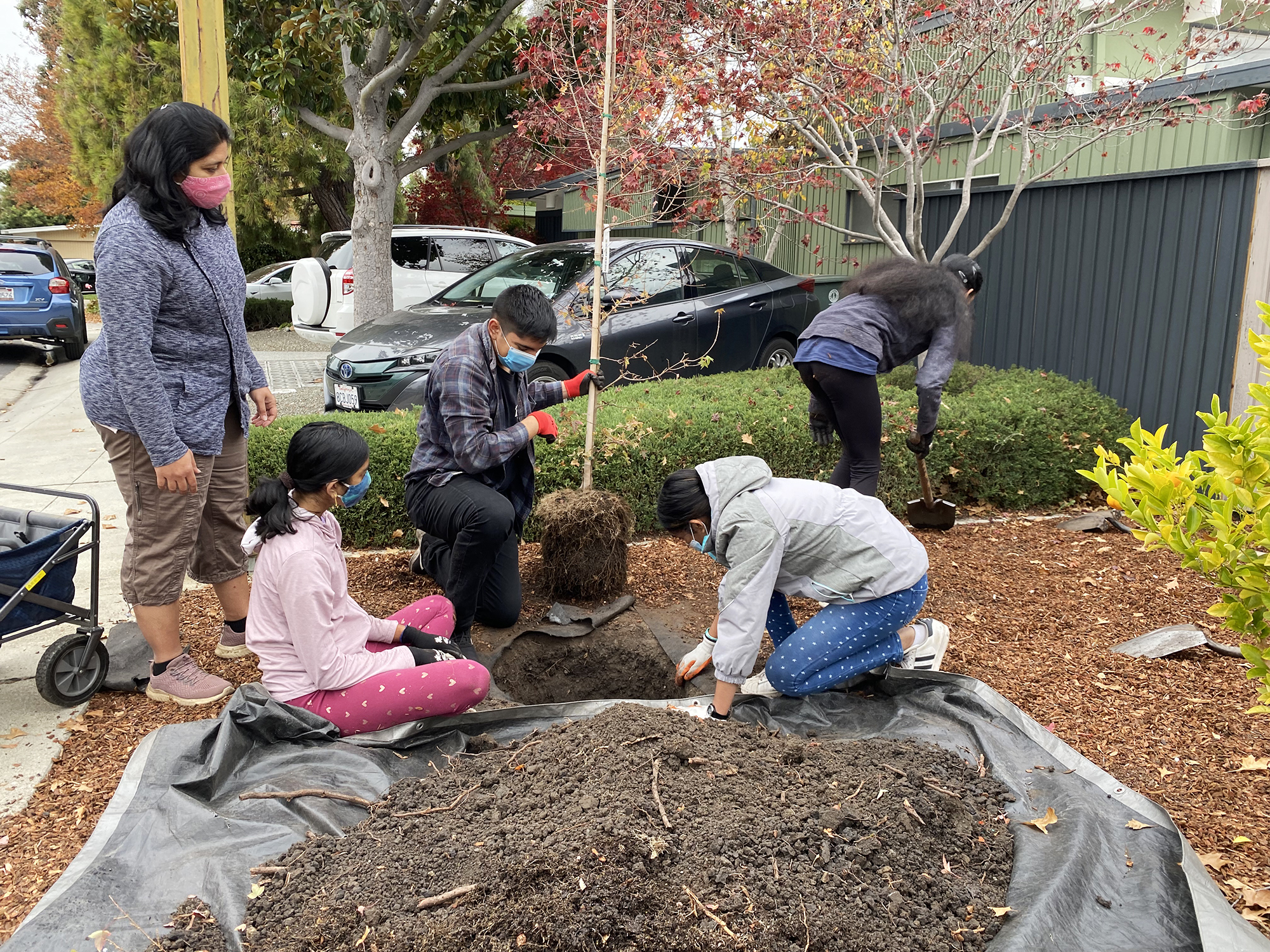 Volunteers plant trees in a backyard of a south Palo Alto home on Dec. 4, 2021 as part of Canopy's planting event. Photo by Gennady Sheyner.

It was a perfect day for planting, with overcast morning sky giving way to afternoon sun, as 10-year-old Reyansh Malla massaged a knot in the tangled roots of a water gum tree that his group was about to plant in the backyard of a south Palo Alto home.

His father, Ratnakar Malla, was a few feet away, digging into the soil with a pickaxe while Reyansh recalled family road trips, including a recent one to Mammoth Lakes, where he collected saplings to bring back to plant in a nursery.

Trees are his passion. So when he saw an opportunity to volunteer with Canopy , the Palo Alto-based nonprofit that is devoted to increasing the local tree population, he jumped at the chance and brought his father along.

"Our family is a tree-loving family," Ratnakar Malla, 43, explained.

The cool weather meant that the trees wouldn't experience too much of a shock as they were removed from their pots and installed in their new homes, said Mel Sutton, Canopy's community forestry field technician. It also created comfortable conditions for the dozens of volunteers who came out on a Saturday morning in early December to toil, laugh, learn, make friends and help Canopy advance an important mission: narrow the gap between the tree haves and the have-nots.

In Palo Alto, this meant planting trees south of Oregon Expressway, in neighborhoods where the size and population of trees are stunted relative to the city's northern parts. By the time the event ended, that deficit was reduced by 18 trees.

Gabrielle Trudeau, Canopy's community forestry coordinator, heads the organization's South Palo Alto Tree Initiative, which is focused on addressing the coverage gap, which she said has grown from about 10% to about 20% over the past decade.

"We're trying to make canopy coverage equal for everyone," said Trudeau, as she shuttled between four planting sites and the group's temporary base at Palo Verde Elementary School.

On a broader scale, Canopy's push toward equality means increasing the canopy in cities and neighborhoods where the tree deficit is particularly severe: East Palo Alto, Belle Haven and North Fair Oaks.

Though the nonprofit was born in Palo Alto, Canopy branched out to East Palo Alto in 2007, when it received a state grant of about $130,000 to plant trees next to U.S. Highway 101. Since then, the organization has planted about 3,000 trees in East Palo Alto, including nearly a quarter of the street trees in the city's right-of-way.

It has paid particularly close attention to schools in the Ravenswood City School District, both in East Palo Alto and in the Belle Haven neighborhood of Menlo Park. To date, it has planted 1,300 trees near schools, according to Catherine Martineau, executive director of Canopy.

The COVID-19 pandemic has forced the organization to pivot from its historically large plantings — which at times attracted more than 250 participants — to smaller events like the one in early December, during which small groups are sent to different sites. Its planting efforts, however, have not abated. Between July 1, 2020 and June 30, 2021, the organization helped plant 378 new trees: 172 in Palo Alto, 101 in East Palo Alto, 38 in Belle Haven, 36 in North Fair Oaks and 31 in Mountain View, Martineau said.

Despite these accomplishments, the tree gap remains significant. Because Palo Alto's trees tend to be older, they tend to be larger. When considering disparities between and within the cities they serve, the organization focuses on canopy cover rate — a measure that considers both the number of trees and their size. Palo Alto's canopy cover rate is about 38%, Martineau said. In East Palo Alto, it's 13%.

"You see the difference in how green some neighborhoods are and how gray others are and it's striking," Martineau said. "We can do all of the analysis to actually measure the tree canopy cover, but you can also just look at it and see it."

Canopy, which last year received a $5,000 grant through the Palo Alto Weekly Holiday Fund , and its small army of volunteers are committed to doing something about it. The organization is educating residents about trees, both through planting events and through classes that it offers to K-6 grade students in the Ravenswood City School District. It also administers the Teen Urban Forester program, which teaches East Palo Alto high school students how to plant and care for trees and pays them to do so.

Adrian Maciel, 16, who is currently enrolled in the Teen Urban Forester program, estimates that he has participated in planting more than 150 trees since he began working with Canopy. This includes plantings in Martin Luther King Junior Park and along University Avenue in his hometown of East Palo Alto.

But on the recent December morning, he was helping put the finishing touches on a newly planted tree in the backyard of a Louis Road home in Palo Alto. His team included three fellow Teen Urban Foresters, all of whom were distinguished by their yellow vests: Angel Patino, 16, Bethzy Garcia, 16, and Nicia Ingram, 17.

"I wanted to help my community," said Ingram, a senior at East Palo Alto Academy.

For Canopy, the Teen Urban Forester program serves two critical functions. It educates youths to appreciate and care for trees. And it helps to ensure that someone will be around to maintain the trees that it plants. Once the organization plants a tree, it tends to it for about three years. After that, the job falls to the city or the property owner.

Indira Selvakumaraswamy, volunteer coordinator at Canopy, said three years is roughly how long it takes for a tree to "establish itself."

"It's almost like rearing a little child," Selvakumaraswamy said. "You may not look at it and think it's a baby, but it is very similar."

Canopy's teen urban foresters have been helping the organization plant and maintain trees since 2007. To date, the nonprofit has provided 252 paid internships benefitting more than 100 students from East Palo Alto, according to Martineau.

In some cases, the experience is life changing. Cynthia Perez joined the program in 2016 to explore her interest in biology, learn more about trees and meet other people. She recalled one planting event that took place near her home.

"I ended up meeting neighbors that I haven't met my entire life in living in this part of my neighborhood," said Perez, 22. "It introduced me to a lot of people and made me feel more connected to my neighborhood."

After completing the Teen Urban Forester program, Perez attended Scripps College, where she majored in biology. By the time she graduated, her family had moved from East Palo Alto to Nevada. Wishing to remain in the Bay Area, Perez applied for a job with Canopy. She currently lives in Santa Clara and works as an administrative associate at the nonprofit.

Since she began her Canopy journey, Perez has become more attuned to the social inequities that trees — or a lack thereof — expose.

"I remember seeing these aerial views of Palo Alto versus East Palo Alto and it was just dramatic to see the stark difference, seeing that this is the air we breathe because we don't have as much of a canopy coverage and access to trees," Perez said.

Canopy, which has also been working in East Palo Alto for nearly 15 years, has made environmental justice an even higher priority in recent years, she said. This means shifting from the metric that the organization has traditionally used to measure its success — the number of trees it has planted in any given community — to deeper discussions around the questions of: How well in tune are we with the community's needs? What do the community members say they want?

"We want to be more understanding of what community members think is best for them," Perez said.

At the same time, Canopy continues to make a big impact in its own hometown. After Palo Alto sawed down 50 mature holly oaks on California Avenue in September 2009 — an event often referred to as the "California Avenue Massacre" — the organization lobbied the city to adopt an Urban Forest Master Plan . It then worked with the city to obtain grant funding for the master plan and to put the plan together, an effort that Palo Alto finally completed in 2017.

This year, the nonprofit was one of several that successfully lobbied the City Council to update the city's tree protection ordinance for the first time in 20 years. In October, the council launched the process to expand the city's roster of protected species, which is currently limited to the coast redwood, the coast live oak and the valley oak.

As Canopy looks to the future, it hopes to further expand its advocacy, Martineau said. This, she said, is the area in which the nonprofit can have the most leverage and help the largest number of trees and residents.

"We want to grow that," Martineau said.