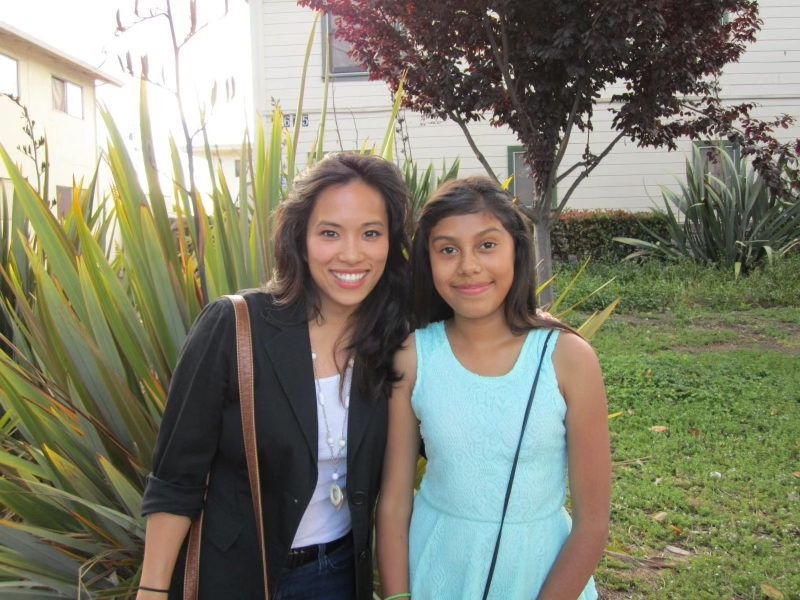 When Joanna Solis was 13, her favorite aunt died of ovarian cancer, and the sudden loss left Solis utterly bereft.

"She was like a second mom to me, and at that time, at 13, it's very hard to process something like that, especially having never come across anything death-related before," Solis, now 21, recalled this week.

None of her friends had gone through a similar loss, so they couldn't understand how she felt. "And I didn't feel like I could talk to my parents about it because they were dealing with adult issues of their own," Solis said.

That same summer, Christine Akhtar was searching for a way to give back to the community. She and her husband had moved from Chicago a few years earlier so he could attend graduate school at Stanford University.

"I had grown up just being around a lot of kids' gatherings where we had cool mentors and ... just people to look up to," Akhtar said. "And throughout my early 20s, I was kind of teaching classes at church and just liked to hang out with that middle school/high school age group. ... I felt like I had the personality for that age group — a little sarcastic, not taking things too seriously — whereas their parents or older figures might not be people that they would confide in."

Enter the Palo Alto nonprofit organization Friends for Youth , a mentorship program that has been pairing adults and kids ages 8 to 17 since 1979. Through a matching process that Akhtar remembers as rigorous, including safety checks and assessments of interests, Akhtar and Solis were paired with one another.

"We instantly hit it off," Solis recalled. "I feel like I really got lucky. She's probably one of the most awesome and nicest people I have ever met."

At the time, they shared passions for Pinterest, baking and getting their nails done.

"Christine is just a very 'soft' person overall. So I felt instantly very comfortable around her, and she was super nice and understanding and was very easy to talk to," Solis said.

Every year, Friends for Youth matches anywhere from 30 to 50 mentors with mentees, asking them to commit to spending time together for at least six months. More than 85% of them do. And some continue on for years. The organization states it currently serves about 300 mentors, mentees and their families, or 1,200 people from San Francisco to San Jose.

This past year, it received a $3,000 grant from the Palo Alto Weekly Holiday Fund to increase its capacity to aid youth.

"Mentoring and positive relationships are needed now more than ever in the midst of the pandemic, skyrocketing rates of depression and social isolation, and plummeting emotional well-being of our kids and their families," Cecilia Chu, the organization's executive director, wrote in the group's application for a Holiday Fund grant.

To help the mentors and mentees bond, the nonprofit offers mentor trainings and gives away free tickets to events and local cultural institutions (mentors and mentees agree to follow strict COVID-19 safety protocols). Akhtar and Solis spent a day at the Monterey Aquarium and participated in a clean-up event at a zoo, among other events.

But it was the more mundane activities that have meant the most to Solis and Akhtar.

"Honestly, the times that I think we got the closest were just, like, running errands," Akhtar said. "You know, running silly errands and being in the car, where you really get to chat and learn about each other's lives."

"I remember we went back to her apartment (once), and we watched a movie and we baked cookies. I remember to this day how delicious those cookies were," Solis said. Unlike going to outside events, "it was more about the connections we were building — and the memories."

Recent research is revealing the impact that a mentor can have on a young person's life. It's not just Solis who has benefited from having an adult to lean on.

The Minnesota-based nonprofit organization Search Institute, which promotes positive youth development and advances equity through research and practical solutions, has found that positive relationships are essential to helping young people succeed and contribute to their communities.

"After decades of conducting surveys, analyzing data, and writing journal articles, Search Institute researchers and practitioners have arrived at a surprisingly simple conclusion: nothing — nothing — has more impact in the life of a child than positive relationships," said Peter L. Benson, the creator of Developmental Assets and former Search Institute president and CEO.

It's now been eight years since Akhtar and Solis met. Akhtar has become a mother of four, and Solis is studying respiratory therapy in college and working part-time at Town & Country Village in Palo Alto.

Over time, their relationship has evolved into a close mutual friendship, they said.

"When I was 13, (our conversation would) be about shows and just little things. And now if I have any questions having to do with adult life, like credit cards and things like that ... it's something that I can go to her about," Solis said.

The pair also talk about broader societal issues, including race relations. Solis is Mexican American and Akhtar is Filipina American.

"I feel like she and I can also bond and talk a lot about certain issues that are going on in the world right now. And I feel like we have really great conversations," Solis said.

Recently the pair celebrated Solis' 21st birthday with a dinner at Sundance the Steakhouse in Palo Alto. It was a special way to celebrate a special person who has come into her own, someone whom Akhtar describes as a good friend to others, loyal, kind, sweet and mature beyond her years.

"I'm just in awe of her ability to rise above any of the challenges that she's been through. Her wanting to be somebody for her own self has been awesome to see develop," she said.

Reflecting on her role as a mentor, Akhtar said she's learned how to give wise advice to Solis while not crossing the line into trying to be her parent — especially when sensitive topics arise.

If there's reassurance Akhtar can give to prospective mentors, it's that just showing up and caring is enough.

"I'm a person who likes giving gifts. But I've realized that those things, those grand gestures, are not necessary to form a genuine, meaningful relationship," she said. "It's really just being there as a support for them."