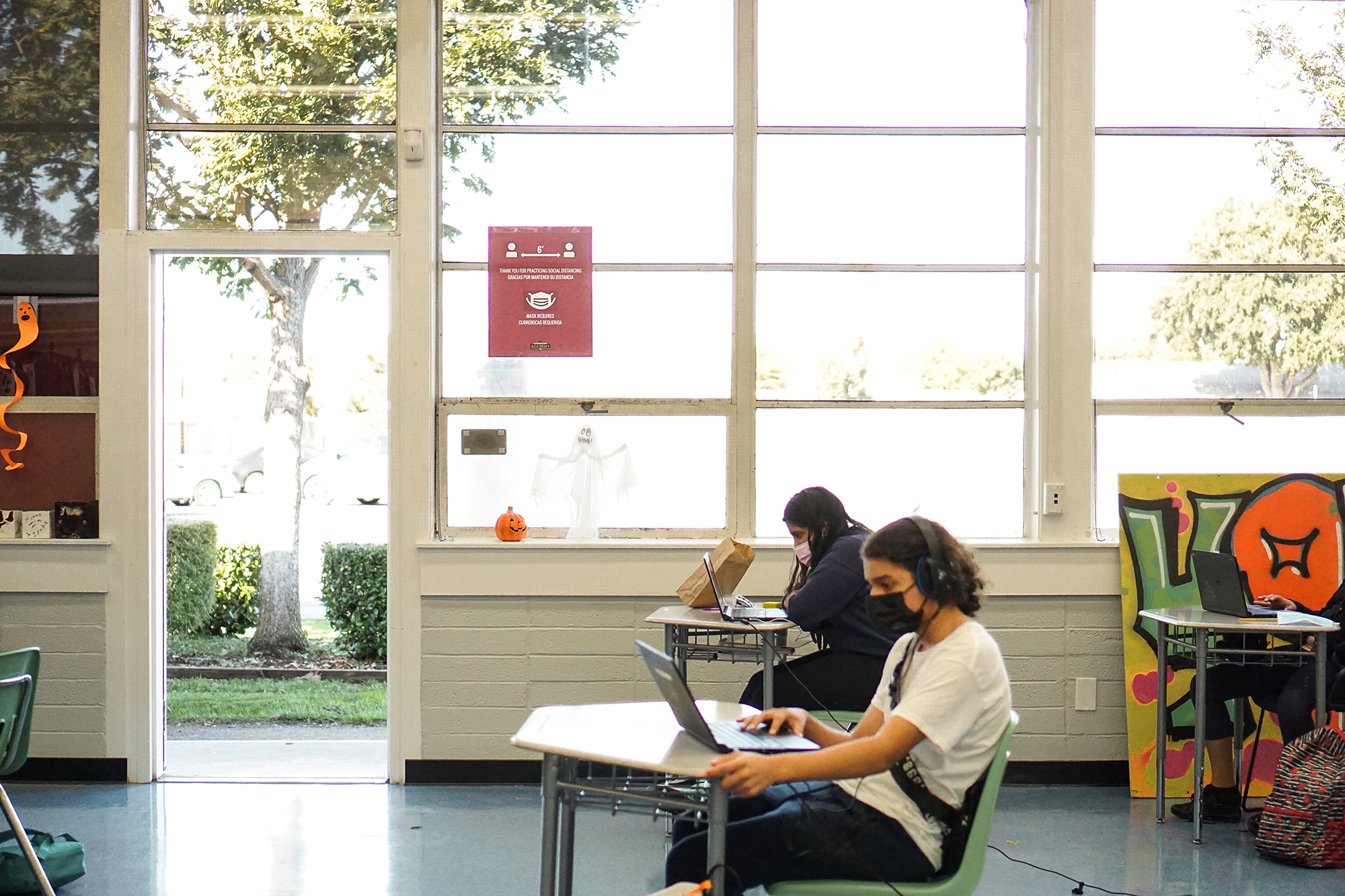 
Catching students who are falling through the cracks
At 49ers Academy's learning hub, East Palo Alto kids get individual help so they succeed at distance learning

When the new academic year started at Ravenswood City School District with full distance learning, staff at the nonprofit San Francisco 49ers Academy knew there would be students who would fall through the cracks: Homeless children. Special education students. Youth who take care of younger siblings because their parents are working all day. Students without reliable internet access. Immigrant children who are just starting to learn English.

These, the neediest of those in need, are the ones the 49ers Academy wanted to provide with consistent, individualized attention as well as coordinated help to keep them both in school and thriving.

The program started with three groups of eight students each who meet in separate classrooms, socially distant and masked and with hand sanitizer at the ready. Now, two months in, the middle-school hub has expanded to six groups, or about 43 students, according to Tahisha Victor, the deputy director for the 49ers Academy.

Each group is led by a 49ers Academy staff member who is equipped in classroom management, but the leader is not a teacher and the hub doesn't provide in-person instruction. Instead, the staff member is a much-needed troubleshooter, a guide who helps the students to stay on track.

From 9 a.m. until noon, students participate in synchronous, real-time learning online with their Ravenswood classes. After lunch, they engage in independent study.

The program has made a huge difference for the youth, both academically and socio-emotionally.

"The first week, they were in awe that they could see other kids," Victor recalled. Even though the newness of that has worn off, and the restrictions of public health requirements keep students from getting too close, Victor said the continuing value lies in knowing there are other kids going through the same thing.

Beyond providing a safe and quiet space, the hubs are also venues for 49ers Academy staff to give targeted assistance to the students. For students who start coming to the hub after having missed several weeks of school, the hub leaders help them to catch up on their assignments. For kids who would benefit from talking with teachers during their virtual office hours but aren't aware that option is available, their hub leader helps them to make the connection.

"We're noticing that information that's being given is lost in translation," Victor said. "Navigating has been the key."

Other times, the middle schoolers simply want someone to help them understand an assignment, Victor said. "Some students have an individualized education plan (IEP), and they just need extra support to get through certain classes."

So much of what the 49ers Academy hub leaders do is personalized to the students' situations, she said. When they realized that some children were being dropped off at campus far ahead of the start of the school day because their parents needed to get to work, Victor said, 49ers staff accommodated them.

"We get here really early," she noted.

When staff realized that older siblings were tasked with being the caretakers for younger ones, the nonprofit invited the sisters and brothers to the middle-school hub. That both reduces the coronavirus risk of having siblings in hubs at separate schools and also relieves the responsibility of the older child.

"Taking off that pressure for the sibling is important," Victor said.

The 49ers Academy's longstanding mission of meeting students' needs holistically has carried over to the community learning hubs. In partnership with the school district, students receive breakfast and lunch every weekday, and if they need dinner as well, they're provided with a packaged dinner to take home. Boxes of fresh food are distributed every Monday to families who need them and include vegetables, eggs and bread among other items.

The 49ers Academy has also connected students with extra programs like physical education and virtual tutoring.

When students were recently asked how the program has helped them, comments ranged from gratitude for the quiet learning environment on campus and joy at being able to see other kids every day to an acknowledgement that the program enabled the student to catch up on schoolwork.

"You guys always find me help," one sixth-grader said. "And you help my mom when she asks, like getting a tutor and stuff."

Funding for the 49ers Academy comes from numerous sources, including the 49ers Foundation. It also this year received a $20,000 grant from the Palo Alto Weekly Holiday Fund to provide academic and social support services for Ravenswood middle school students and also those attending Menlo Atherton High.

The Holiday Fund and community support are critical so that kids can reach their full potential, even in the pandemic, Victor said.

"So many kids for the most part are being left behind. I think about this a lot. If we didn't open our doors, English-language learners who've missed many assignments would be considered bad learners — but they're not bad learners; they just didn't have the support," she said.

"This is not babysitting; this is not day care. This is ... an opportunity to come into a safe environment to get school work done, and if there's a barrier, we address them with the resources we have."

Having expanded from three cohorts to now six, the nonprofit hopes to add more groups in order to serve more students who are struggling with distance learning and the chaos that the pandemic has created for their families.

"This is a small Band-Aid. We're trying to pick out the families with the most need," Victor said.

"Having the resources to address these dire needs is important."