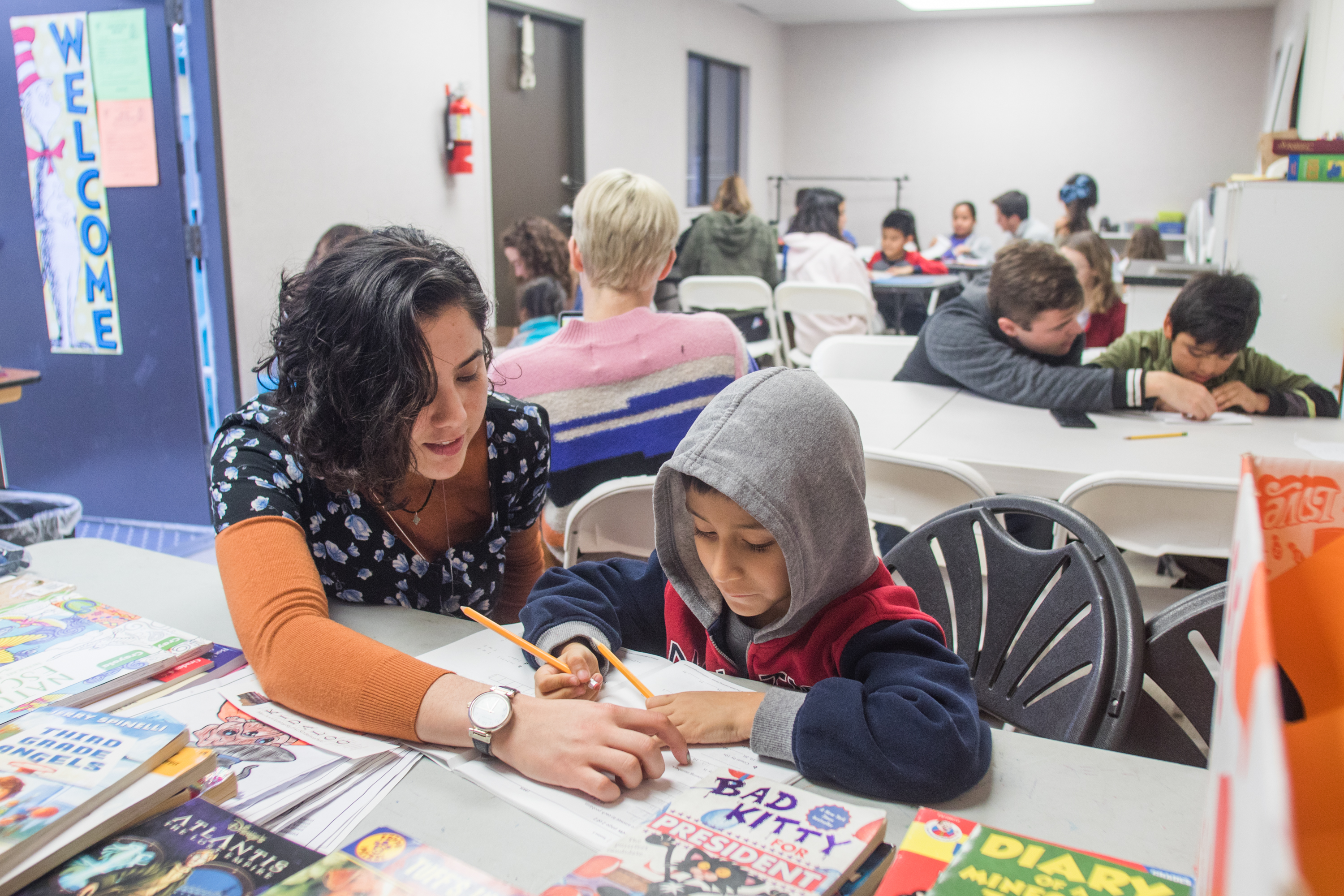 Paulina Nava, an undergraduate student at Stanford University, tutors first-grader Zabdiel Hernandez and helps him with his math homework at the Buena Vista Homework Club on Nov. 26, 2018. Photo by Veronica Weber.

Twice week after school, a rather mundane trailer in the midst of colorfully decorated mobile homes at Buena Vista Mobile Home Park becomes a lively clubhouse for neighborhood children.

The Buena Vista Homework Club, which started in a carport in September 2017, has blossomed into a place where Stanford University students and local educators engage academically and socially with students of all ages.

"What's equally important to the homework part of it is the community," said Deborah Farrington, the program's founder.

The club serves Buena Vista children attending Barron Park Elementary School, Fletcher Middle School and Gunn High School. The south Palo Alto neighborhood is home to more than 400 residents, including about 100 children. Between 10 to 16 students attend the after-school program on any given day.

On a recent visit, there was hardly room to walk around in the clubhouse, whose walls are decorated with bright neon artwork. Conversations filled the air, with about 10 students at desks receiving one-on-one help with their homework while others shared drawings with volunteers. Some students played games outside.

The program, supported by the Caritas Foundation, strives to reduce the academic achievement gap among young students while also occasionally hosting educational games, reading competitions and events, such as a Dr. Seuss-themed party.

This year, the program received a $10,000 grant from the Palo Alto Weekly's Holiday Fund to help create a better learning environment for the children, who often lack the resources of their peers at school.

So far, funds have been used to install Wi-Fi, create a utility sink for food or art projects, buy healthy snacks and furniture, and enlarge the space. Future plans include building a small play area, creating a garden, establishing shade and decorating the building's walls inside and out.

Allison Pope, a Stanford sophomore, was one of the program's earliest volunteers and now works as its managing director.

"Getting to know the people that live in this community and share their stories and hear what they have to say — and so many of them, they're so knowledgeable — it brings me a lot of joy," she said.

Since Farrington now works as a principal at Our Lady of Mount Carmel School in Redwood City, Pope has been overseeing the semiweekly sessions. She not only helps students with homework, reading and math, but she also answers some girls' questions about puberty and listens to the daily school drama that students share.

Before Farrington approached the Buena Vista Residents Association with her idea to form a homework club, she and her husband, Amado Padilla, a professor at Stanford's Graduate School of Education, had been supporting residents in their five-year fight to preserve Buena Vista from being redeveloped.

After the Housing Authority of Santa Clara County purchased the property in 2017, thus preserving the park as affordable housing, Farrington approached the residents association with her idea.

Maria Martinez, a member of the residents association and current manager of the homework club, said that at first she was skeptical but became relieved when volunteers from Stanford, Los Altos High School and Gunn High School arrived. Soon after the club opened, Caritas, the park's management company, offered the group the community trailer for its clubhouse.

Today there are anywhere from five to 12 retired educators and students who visit twice a week. Many of the volunteers and children have formed close bonds over time, the volunteers say.

Stanford senior Paulina Nava sees enormous potential and a unique skill set in the students with whom she works. For instance, many are bilingual and some trilingual.

Over the summer, she became especially close with fifth-grade best friends Sophia and Liliana.

"I went to their school play this past week. ... They had their lead roles," she said. "I appreciate seeing young women, especially young women of color, taking up so much space."

Sophia, who was shy and quiet when she first came to the club, earned first place in a competition by reading 38 books in one summer. She's now opened up and is always talking with the volunteers.

Nava added that both Sophia and Liliana are driven academically and are already asking her about college.

"I'm just like 'Chill out!'" she said with a laugh. "But it's just really cool to see that aspiration."

One former student became the first in his family to attend college. Pope recalls helping him with his essays, talking about her own college experience and mentoring him through the process. When he went to San Francisco State University, the entire community was proud of him.

"Getting to help him with his schoolwork now, and seeing him be a mentor for children in the park and them seeing that that level of education is possible and attainable and something they should strive for is really meaningful," Pope said.

Most importantly for the program, Farrington said, the volunteers have earned trust of the parents, who have seen the volunteers' consistency and commitment and are now making sure their kids attend.

"It's very hard for the immigrant parents to help their kids because some of them don't speak English. They didn't even go to school, like my mom; she probably only went until third grade," Martinez said, adding that she herself was able to thrive academically and attend college because of programs similar to the Buena Vista Homework Club.

In many cases, the students don't have any other place to do their homework.

"In the house, there's often one small bed where two of them sleep on the same bed, and there's no space to actually do homework," Martinez said.

But for many students, the club is clearly more than a space to be in. It's a place for their potential to be nurtured, Pope said.

"These kids are so insanely brilliant, and unfortunately going to school in this district, a lot of the times, they fall through the cracks because they don't have the same support as the other privileged kids in this area, so just giving them the means —"

At that moment, Pope was interrupted as a girl called out to her, "Ally, where are the fruit snacks?"

"—just giving them the chance, and the materials and the means to learn and use their knowledge to the fullest is critical to this area, and to these students, and it brings me so much joy and pride to be a part of that."