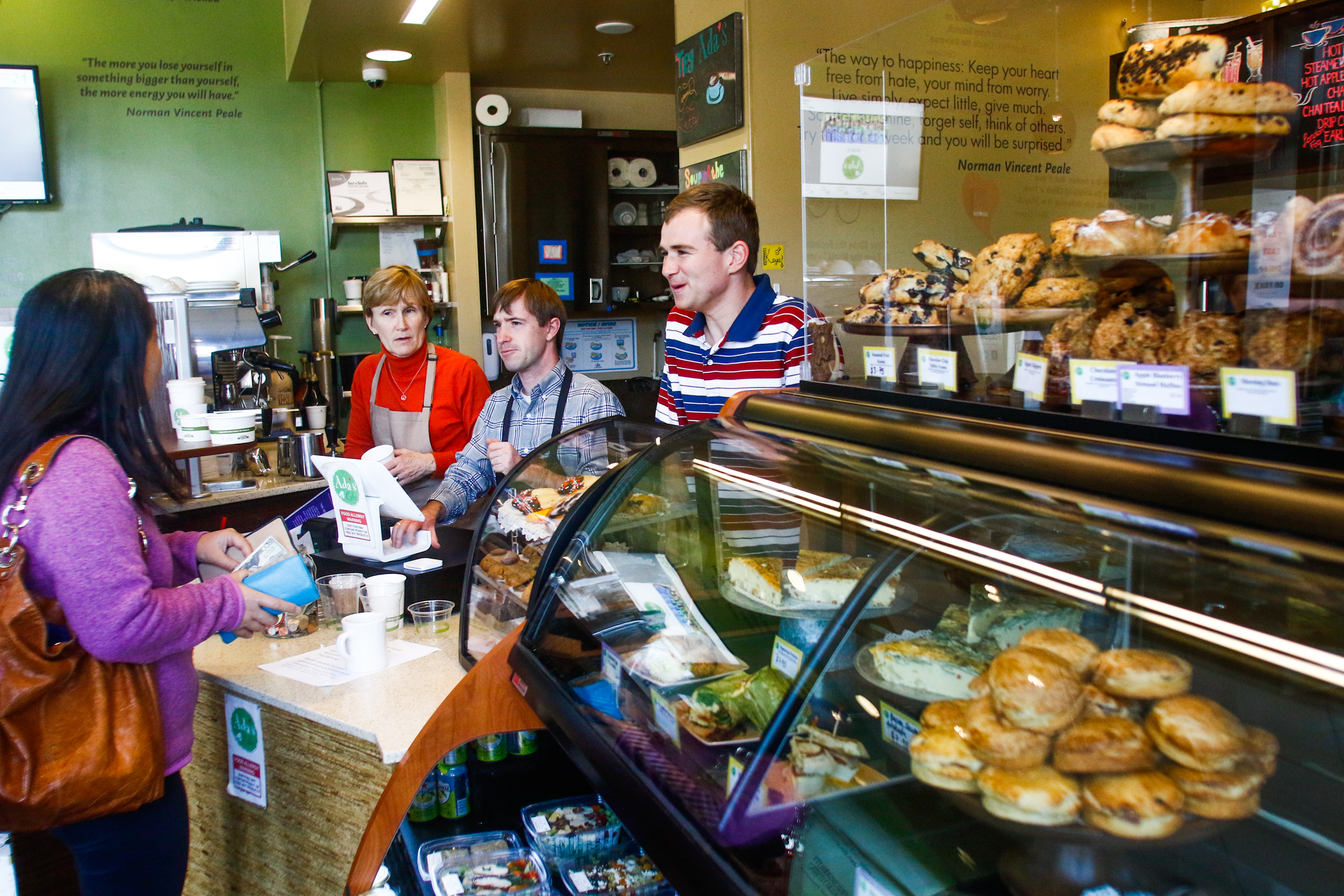 Wodd Cerf never saw himself as a leader, but he's now a manager-in-training at Ada's Cafe in Palo Alto. He opens up most mornings with card access to the building, one of his many duties since getting promoted in May.

He maintains his professionalism with the patrons as they enter the shop, a straight shot from the door to the counter, look over the displays of delectable pastries and to-go items and choose a dish or drink from menus. While the espresso machine hums away, Cerf and his customers enjoy each other's company and inject humor into their conversations.

"If they ordered a big drink order I just tell them, you know, 'Sounds like someone needed to get their buzz on,'" he said. "I can joke with them in a way that makes them want to come back." 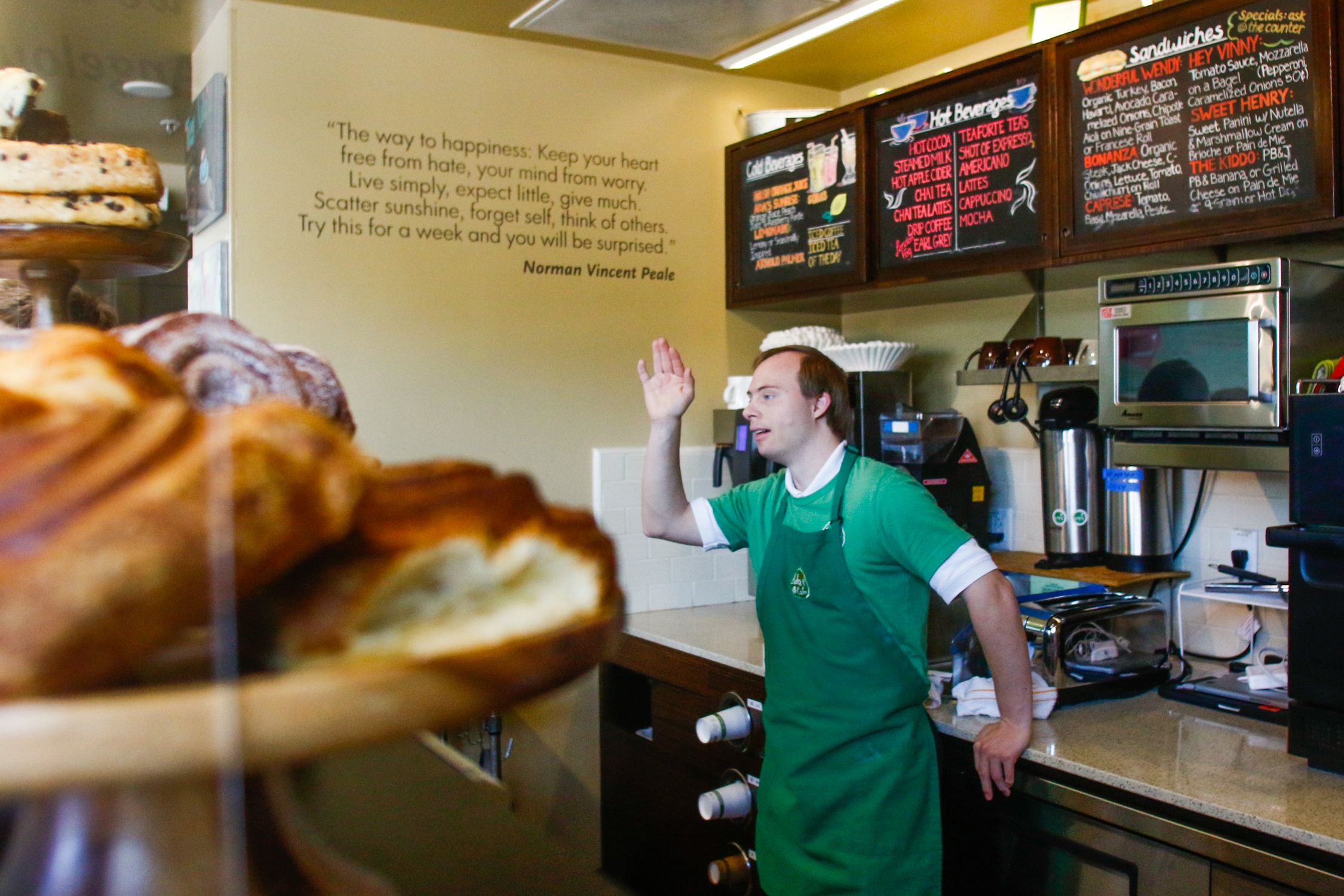 Jeremy Teter waves to longtime customers at Ada's Café as he works the lunch shift on Nov. 21.
Cerf is one of the 34 people with disabilities who are finding empowerment through their jobs at Ada's Cafe, a nonprofit that aims to give work opportunities to this group and to change the face of retail. They work out of a small, inviting coffee shop that opened in 2014 next to the Mitchell Park Library or in the commercial kitchen in Mountain View, where all the food is made with organic ingredients. Many of them are trained to be a jack-of-all-trades who can take orders, prepare food, deliver orders and clean up, among other duties.

"The more u grow at the cafe the more responsibility you will have and more trust In your self and more trust with people who work with u every day," Cerf said in a follow-up email.

The nonprofit has also hired a Syrian refugee who immigrated to the United States and landed in the Bay Area, where he said he applied for more than 50 jobs before coming to Ada's.

To support the work of Ada's Cafe, the Palo Alto Weekly Holiday Fund gave a $5,000 grant last year, which allowed the organization to fill a shortfall between the cafe's revenues and the costs of running the operation.

"Our grant helped cover the minimum wage that has increased for everyone," Foley-Hughes said. The nonprofit also provides health insurance and workers compensation, which have also become a large expense.

All employees start out earning the minimum wage, which is currently $12 an hour in Palo Alto and is set to increase to $13.50 in the new year. There's little worker turnover at Ada's, where wages range between $12 to $20 per hour, Foley-Hughes said. Funding the employee earnings will be a growing concern as the rate is scheduled to go up to $15 an hour by 2019.

Foley-Hughes noted the nonprofit hasn't raised its prices since late 2015.

"We're so community-minded and we don't want people to not afford to come. We try to be good about that," she said.

On-the-job training is a vital component to maintaining an efficient work environment.

"When you're talking about working with people with disabilities, each person has a plan," Foley-Hughes said.

John Collins, 53, of Palo Alto, is learning how to create latte art from his co-workers. Hearts and bears are pretty easy to draw, but he said it would be neat to create a yin yang symbol on foam.

"I didn't really get to make coffee drinks before on the espresso machine," said Collins, who has previous food service experience at Papa Murphy's and Emil Villa's Hickory Pit. His sharp memory is apparent as he carefully describes the steps into making a latte, which requires making sure the milk is warmed up to 120 degrees Fahrenheit.

In May, Collins used the money he saved up from his job to purchase an HP All In One desktop computer during a Memorial Day sale, just under $600. Now, he has his sights set on saving up for a new car -- either a Mazda6 or Dodge Charger -- or a Nintendo Switch.

Jeremy Teter, 32, of Sunnyvale, is embracing his inner people-person at Ada's, where nowadays he finds himself at the nonprofit's catering events initiating conversations with customers by asking about their day.

"I'm learning to do things different to challenge myself," he said.

His new responsibilities include counting money at the cash register ("I do the dollars first and the change last," he said) and taking a cart to the Mountain View kitchen where he visits the storage room to stock up on supplies, a task he does either on his own or with a co-worker who can help keep track of what's needed.

Teter's passion for his job and co-workers is apparent.

"We love each other. We respect each other and we are a family that care about each other," he said. "It's a blessing to be with people who you really like ... who you care about, too."

Powell Gaynor is comfortable behind the cash register and cleaning tables but now finds himself relearning food preparation and bringing out orders in a timely manner, which he said can become overwhelming.

The 21-year-old employee originally lived in Mountain View when he was hired, but now works on the weekends while he spends the weekdays in San Jose as a San Jose City College student. He aspires to become a humanitarian and to one day take part in relief efforts.

Gaynor is learning the ropes of the espresso machine by watching his fellow co-workers.

The job requires taking on multiple responsibilities, which fosters a sense of independence among the workers, who strive to create a place for the community to indulge in a good meal.

"It's nice to see people who might have a hard time getting a job otherwise ... (be) able to work here, and they can feel like they're a regular person," Gaynor said.