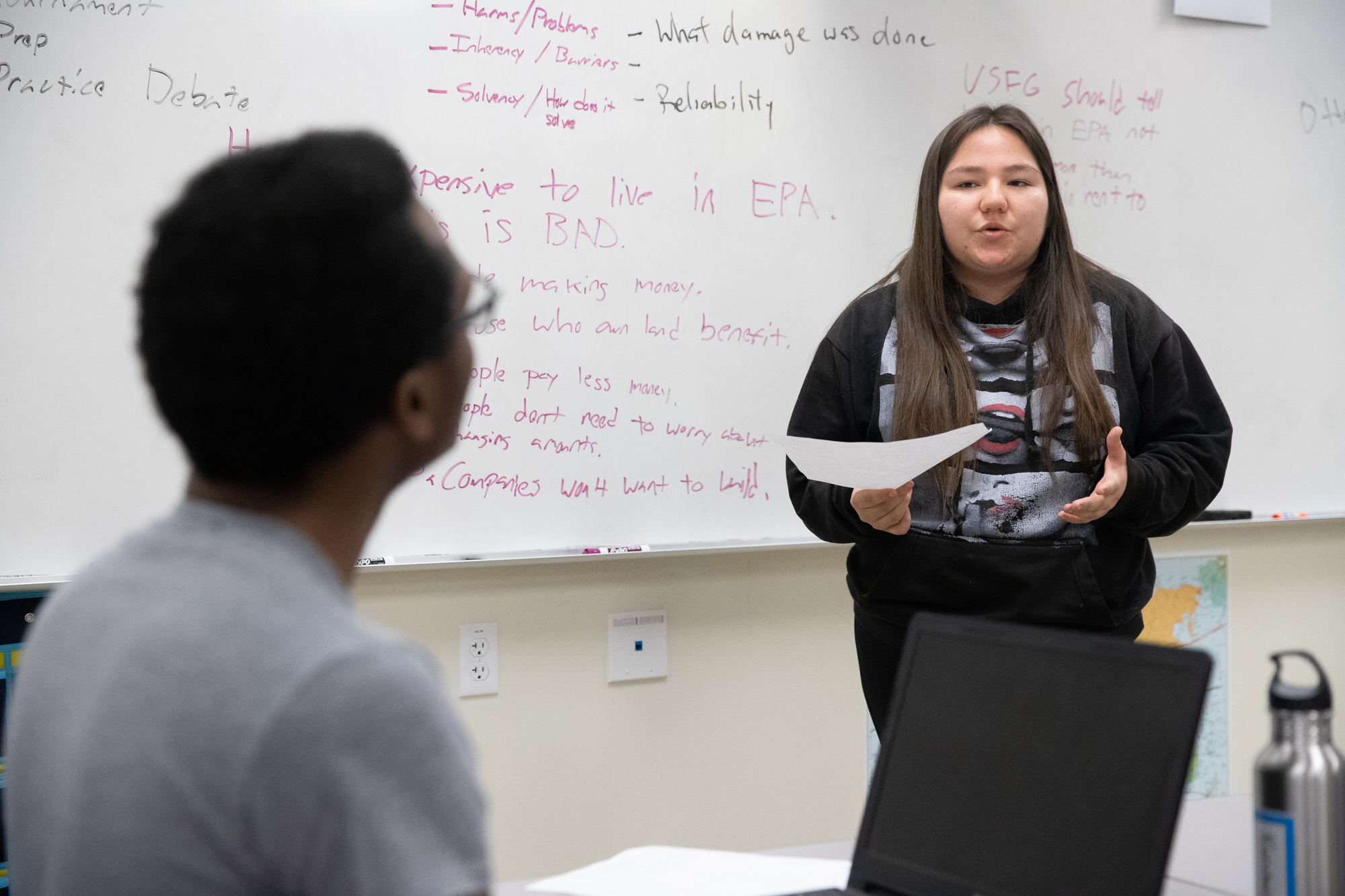 Darian Huiltron-Riverra, a senior at East Palo Alto Academy, delivers a practice closing statement to her debate coach, Kwodwo Morre, during a coaching session on campus after school on Nov. 18. Photo by Magali Gauthier.


Through the art of debate, students find their voice
High schoolers take on an activity many fear: public speaking

Jules Thomas has always been confident in his public speaking skills, but nerves got the best of him when he first entered the world of debate.

During his freshman year of high school, he was intimidated by the sight of people speed talking through their points and felt challenged when he faced rebuttal arguments from the opposing team.

At his first tournament, he was stumped by a question and ended up losing the match. The loss was enough to make him stop participating with the Silicon Valley Urban Debate League for a while. With his mother's encouragement, he improved his skills by watching a video of himself in a debate round and then felt motivated to return.

On the night before a debate tournament last school year, he was up from 2-5 a.m. reading as many articles as he could on the topic of selling guns to Afghanistan and Iran to drill key ideas in his head.

He was thrilled when he and his partner were assigned to argue against the issue and shocked when his team was named the winner.

"Are you sure?" he recalled asking the judge.

His partner quickly told him to be quiet and accept the result.

"I felt that victory," he said in an interview with the Weekly. "I felt like the hard work that I put into (it is) the reason why I won."

Thomas, a 16-year-old homeschooled junior, is one of nearly 30 students in East Palo Alto involved with the debate league, which partners with the East Palo Alto Academy, Oxford Academy and College Track (where Thomas attends weekly practices).

The nonprofit debate league received a $5,000 grant this year from the Palo Alto Weekly Fund to help pay for the league's head coaches, the weeklong Summer Debate Institute (at which students practiced their public speaking skills with the San Francisco cast of "Hamilton") and tournament-related expenses.

Some debate programs revolve around the goal of winning tournaments, but for this debate league, it's all about what the students gain from the activity, said Mecca Billings, the nonprofit's director of development.

The Holiday Fund has also supported the league's mentoring program, through which students visit local companies and meet professionals who tell them how debate has impacted their careers, Billings said.

A bulk of the students' time is spent on research, debates against one another and mental preparation to enter a tournament with help from their head coach, Kwodwo Moore.

"I'm not very different than the students. I try not to put myself above them," said Moore, who first became involved in debate eight years ago while he was a student at Emeryville High School.

"Public speaking ... helps to build character and strength and a sense of self in the people who do it."

Moore used his enthusiasm for debate during a recent Monday afternoon inside an East Palo Alto Academy classroom to motivate five students, most of whom are freshmen.

After fueling up on snacks, the teens prepared for a tournament at Santa Clara University by reviewing the three areas competitors need to cover within a policy debate: identifying the harms, describing the barriers around the issue and proving their plan is solvent.

They then dove into a debate in which they argued in support of a resolution composed by Moore: "The United States federal government should tell landlords in East Palo Alto not to charge more than $2,000 a month in rent to anyone."

Each student hesitated as they stepped up to the front of the classroom and carefully delivered their arguments, often looking down at their notes as the timer ticked away.

"The problem is the rent is too expensive," freshman Aaliyah Johnson said.

"We should try helping (homeless) people because we obviously care about the people of EPA," said Diana Torres, a fellow freshman.

"Our main focus should be the people in East Palo Alto who have been here for years and are struggling so much," senior Darian Huiltron-Riverra said.

After each speech, Moore cross-examined the students, who found themselves having to construct a response on the spot.

Following the debate, Moore deconstructed their ideas, giving the students a glimpse of the importance of taking notes to track their opponents' points. Telling a judge how he or she should think about an issue could work out in their favor, he added.

"Think about it like a game where you go point for point. ... That's how you win rounds."

Thomas, now in his third year with the debate league, said he has tried to get more students interested in the program, but many say they don't consider the activity the "coolest" thing to do.

"Some of my peers say, 'Why are you doing this? This is for white people,'" said Thomas, who is African American. "And I have to remind them (that) I can learn it too."

He said he has seen more people of color learn debate recently with a goal of using their public speaking skills in the real world.

Now considered an experienced debater, Thomas, who joined the league with a strong interest in politics, has guided and related to other students who are working through their struggles as novice debaters.

"Don't worry; just work hard," he's told his younger peers. "Do what you need to do. Learn the negative and positive about the situation or topic and you'll be alright."