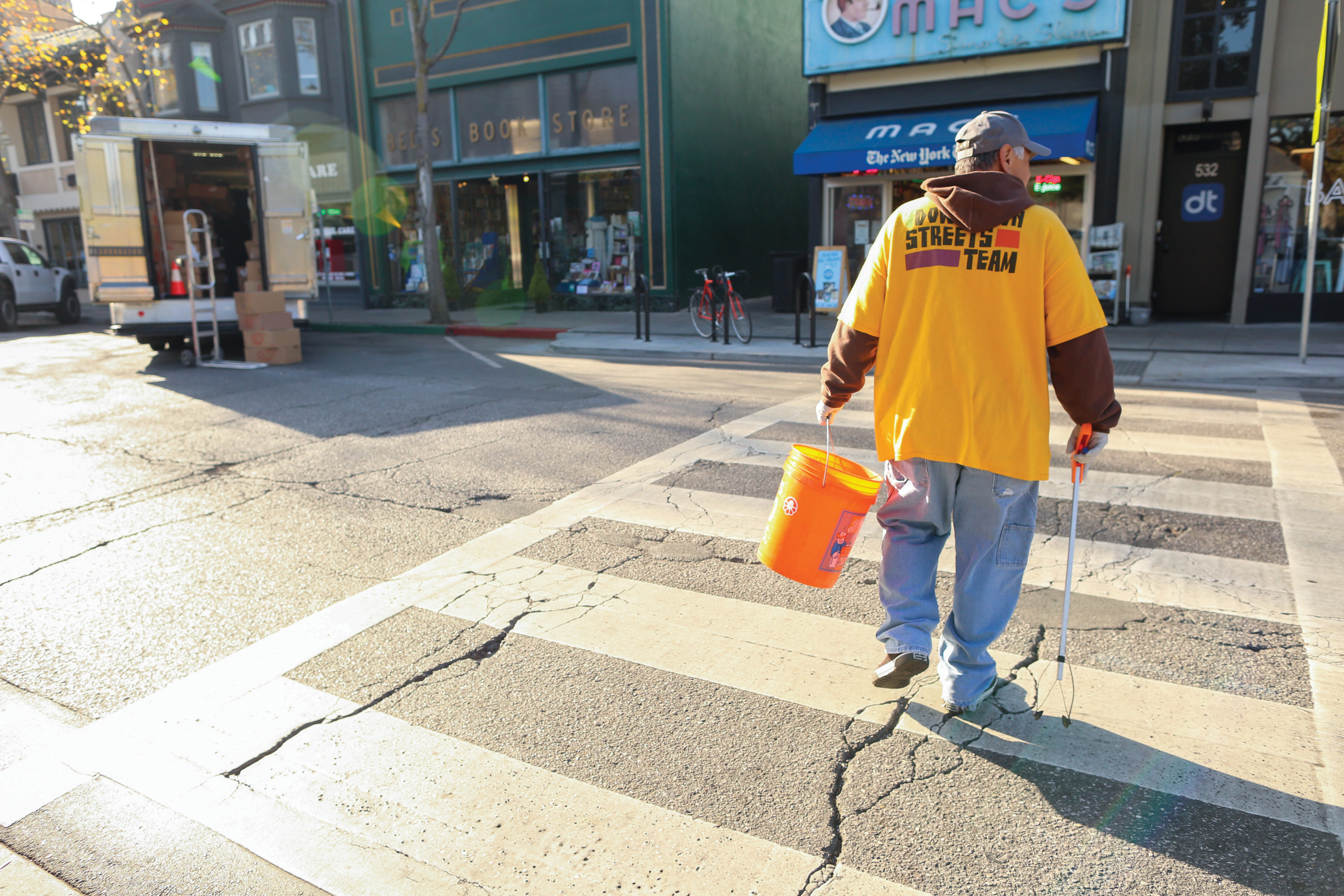 Ruben Michael picks up litter in Palo Alto on Nov. 21 as a member of the Downtown Streets Team. For more than a decade, Michael has worked for the nonprofit cleaning the city's streets and plazas, which he says is his way of "giving back" for the help he's received in his life. Photo by Sammy Dallal.

Sporting a yellow T-shirt and armed with a picker and a bucket, Ruben Michael and his four-person team of volunteers gathered at a Palo Alto downtown parking lot on a recent Thursday morning to start their shift.

In an area teeming with techies obsessed with disrupting the world, Michael's assignment was relatively simple: making sure downtown plazas, streets and lots are clean. For him and his three teammates, that's a point of pride.

"It gives you a reason to wake up," Michael said.

He has been at it for more than a decade, ever since he decided to drop in on a meeting of the Downtown Streets Team at the behest of a friend's girlfriend and added his name to a list. It was 2005, and his life had just spiraled out of control. Then in his late 40s, Michael had a drinking problem that he said caused him to lose his job and his house. He was sleeping in the bushes next to the Walmart in Mountain View and depending on churches for meals and clothes.

Today, he is going on 13 years of sobriety, which he attributes directly to the support he has received from the Downtown Streets Team. In exchange for the four-hour work shifts, he and other team members get gift cards for gas, food, clothes and other essentials. Just as importantly, after years of barely scraping and trying to stay under the radar, they get a sense of purpose and a community of supporters. As he talked, his supervisor, Darlene Berryessa, noted that he is now one of her best workers.

"It makes me feel like I'm giving back for all the stuff I've gotten since I've been on this team," said Michael, who now has housing.

Berryessa has her own tale of survival. Born in Palo Alto, she lost her house and was homeless for what she calls "two cold, miserable years" before she landed an apartment at Palo Alto's Opportunity Center for the homeless in 2006. Cheerful and enthusiastic, she also credits the Downtown Streets Team for helping her turn her life around.

"This helps me make sure I have food on the table and gas in the car," Berryessa said.

Since she and Michael joined the nonprofit more than a decade ago, the demand for its services has only grown, said Chris Richardson, chief program officer of Downtown Streets Team. When the organization launched in 2005, it was still possible to get an apartment with a Section 8 voucher, he said. Today, even some Apple engineers can't afford to live in Palo Alto.

To help those most in need, the Downtown Streets Team has recently revived a Case Management Flex Fund, an account that it uses to help team members pay for application fees, background checks, driver's licenses and other expenditures critical to their transitions from homelessness to housed. This year, the flex fund received $7,500 from the Palo Alto Weekly Holiday Fund.

Richardson said the goal of the flex fund is to allow the organization to act quickly and "have a huge impact with a small amount of money." He said he's heard horror stories of people who failed to get housing because they couldn't cover the $26 application fee.

"It's already hard enough to find housing in this area," Richardson said. "If you're already at a disadvantage because you've been evicted before or because you have no tenancy history in last 10 years we want to remove all those roadblocks. And if it's just a $26 application fee, we need a mechanism to do that. Having a fund specifically designed to be flexible is super cool."

First established in 2011, the flex fund has come and gone in the subsequent years, based on the nonprofit's funding levels. The Downtown Streets Team has used it to get members hotel rooms or other temporary lodgings while they transition from one place to another. Each payment is capped at $500, he said.

"The first thing someone asked for was a burial spot for $500," Richardson recalled. "They were terminally ill and they wanted something to have their name on it when they left."

The nonprofit provided the fund, he said.

On one recent morning, members of the Streets Team made their way down Palo Alto streets, picking up cigarette butts on Lytton Plaza. To downtown merchants, they are familiar faces. Some offer them free coffee, Berryessa said. One downtown shopkeeper gives each member a small cash gift during the holidays.

In addition to the camaraderie, the team members appreciate the structure that the nonprofit brings to their lives. While there are some strict rules (wear the yellow shirt; no jaywalking), they have the flexibility they need to get to doctor's appointments or necessary meetings.

Jeff Talley, who began working with the nonprofit more than a decade ago, is a Streets Team success story who wants to encourage other team members. Formerly homeless, he credits the organization with helping him look for employment and for providing a much-needed stipend, which supplements his income.

"We're here to set an example of what can happen when you get on the team," Talley said.

Not everyone on the team has stability in their lives yet. Shanen Way, who has been with Downtown Streets Team for the past four years, lives in a homeless shelter in Sunnyvale and takes public transportation to work with the team five days per week. Reserved and industrious, Way manned a coffee cart in Sunnyvale as part of a work program before joining the Palo Alto team. Despite the non-stop commutes, he called his experiences with the team "very positive."

The nonprofit tries to promote the positive atmosphere during its weekly team meetings, which take place every Thursday afternoon. Richardson said the main goal of the meeting is to hear from team members and celebrate their accomplishments, big or small.

"For someone who newly joins us, if they've been years without that type of community, their next goal could be something like, 'I don't have an ID right now.' If they get up and say, 'I just got an ID!' we'll celebrate that. Because that's a big deal for them," Richardson said.