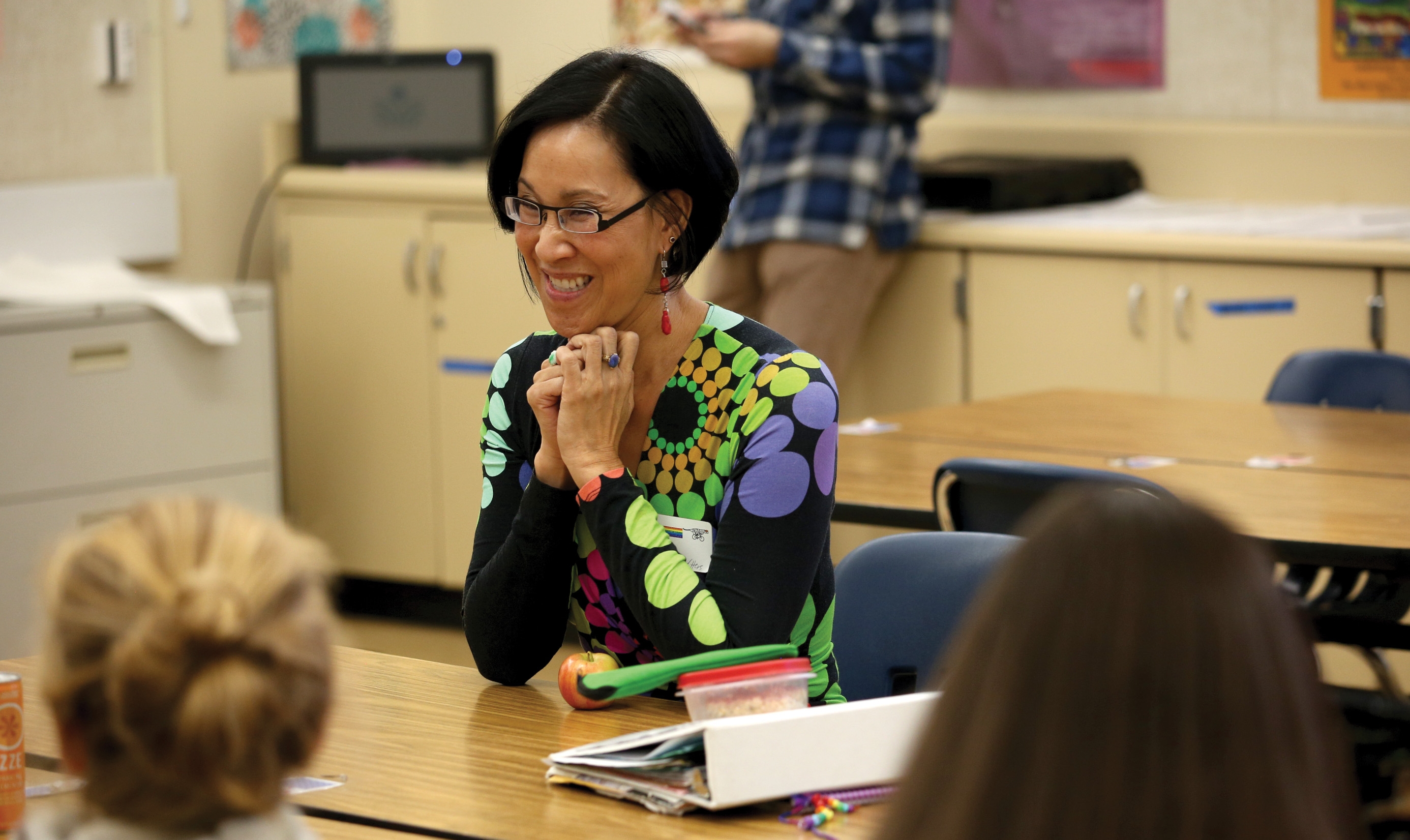 Kristen Lee, a Fletcher Middle School librarian and faculty adviser to Fletcher's first-ever Gender Sexuality Alliance (GSA) club, leads students during a club meeting on Nov. 20. Lee credits the nonprofit Outlet program, which provides mental health and other services to LGBTQ youth, for guiding her and other staff in supporting LGBTQ students. Photo by Sammy Dallal.

Several years ago, when a transgender student wanted to transition from female to male at Fletcher Middle School in Palo Alto, librarian Kristen Lee reached out to Outlet, which provides services to lesbian, gay, bisexual, transgender, queer and questioning (LGBTQ) youth, to lead a training for the entire staff.

Later, when a student approached Lee to start the school's first-ever Gender Sexuality Alliance (GSA) club, her first call for guidance was to Outlet.

When the school administrators started hearing reports of students being harassed while using gender-neutral bathrooms on campus, Lee sought Outlet's advice on how to address it.

And when a series of posters appeared last summer criticizing Palo Alto libraries for displaying literature about LGBTQ issues as part of its Pride Month celebration, Lee brought Outlet to Fletcher for a parent education event attended by more than 75 people.

Outlet's role in Lee's efforts to better support LGBTQ students at Fletcher has been "all encompassing," she said.

"This organization has been key to my work not only in the GSA but my work in parent education, my work as a librarian," Lee said. "It's really invaluable."

Outlet, which is part of local nonprofit Adolescent Counseling Services, was awarded a $10,000 grant this year through the Palo Alto Weekly's Holiday Fund to support services for transgender youth; counseling for LGBTQ teens struggling with depression, anxiety and other mental health issues; and education, consultations and outreach for hundreds of Palo Alto, Menlo Park and East Palo Alto residents.

Outlet was formed in 1997 as an HIV-prevention and education program through the YWCA of Palo Alto. The organization taught volunteer high school students how to lead HIV-prevention workshops, with the goal that they would then teach peers at their schools. It turned out that many of those students identified as gay, lesbian or bisexual, eventually prompting Outlet to form a support group for LGBTQ youth.

Today, Outlet runs six peer support groups for different ages (from 10 years old to 25) and gender identities. All of the groups are free, drop-in, confidential and run year-round.

The structure of the groups is flexible, said Ryan Fouts, program director for Outlet. Sometimes, the teens want to talk through challenges they're facing at school or at home, such as difficulty coming out or being misgendered by a peer or teacher. Other groups spend time doing homework, playing games or simply hanging out.

A transgender man who transitioned from female to male while a Gunn High School student several years ago said in a previous Weekly interview that at the Outlet groups, he felt he had "permission to exist."

"These are spaces where youth can come and find support with their peers and have a chance to be who they are," Fouts said. "It gives youth an opportunity to maybe explore and test out their identity, if they're still in a process where they're exploring who they are. This is a safe place for them to do that. And it's an opportunity for them to meet other people who are going through similar things."

The Holiday Fund grant will help Outlet boost its support in particular for transgender students, a group that has "drastically increased" at the program in recent years, according to the Outlet's grant application. Transgender youth now make up one-third of all young people served by the program's support groups.

Fouts attributed this increase to a "slow progression of folks feeling more comfortable coming out earlier."

Outlet is seeing an overall rise in LGBTQ teens needing and seeking mental health services. According to the California LGBTQ Youth Report, more than 78% of LGBTQ youth in the state felt depressed or down in the prior week and only 10% said all of their school staff are supportive of LGBTQ students. In Santa Clara County, students who identify as lesbian, gay, bisexual, transgender or queer are three times more likely than their peers to attempt suicide and are 1.5 times more likely to use drugs and alcohol, according to a 2016 survey.

Outlet staff, all of whom are members of the LGBTQ community, work to communicate to youth that "there's an opportunity to be happy and healthy and successful, despite challenges that you might experience" related to gender identity and sexual orientation, Fouts said.

Lee said that students in Fletcher's Gender Sexuality Alliance (GSA) club have benefited from an Outlet staff member who is biologically female but identifies with they/them pronouns. The staff member comes to the school library, and students can sign up to spend time with them one-on-one or in pairs.

For the students, the staff member is "like a rockstar," Lee said. "The first time they showed up my kids were like, 'Here is a person who identifies within the community. They are out, they are proud and they are thriving.'"

Lee said Outlet's training has helped staff better understand the spectrum of gender identities. She urges teachers to ask students their preferred name and pronouns at the start the school year — and to apologize directly if they get it wrong at any point. She's also become more aware of gendered language, such using as the phrases "you guys" or "ladies and gents" to address students.

"This is the kind of advice I'll get from Outlet," she said. "I'll send an almost-weekly email: 'This came up. What do I do about this?'"

One of Outlet's priorities this year is to be more purposeful in reaching out to local middle schools, which are increasingly requesting support from the program, Fouts said. The program provides training to teachers and school staff on how to create inclusive policies and safe environments and on the laws that protect students' safety at school.

Outlet also offers free consultations to families; provides parent education in school districts such as Palo Alto Unified; and is launching soon a support group for parents of transgender and gender-expansive youth.

Outlet anticipates serving more than 3,000 people this year through all of its services, including 330 LGBTQ youth and straight allies.