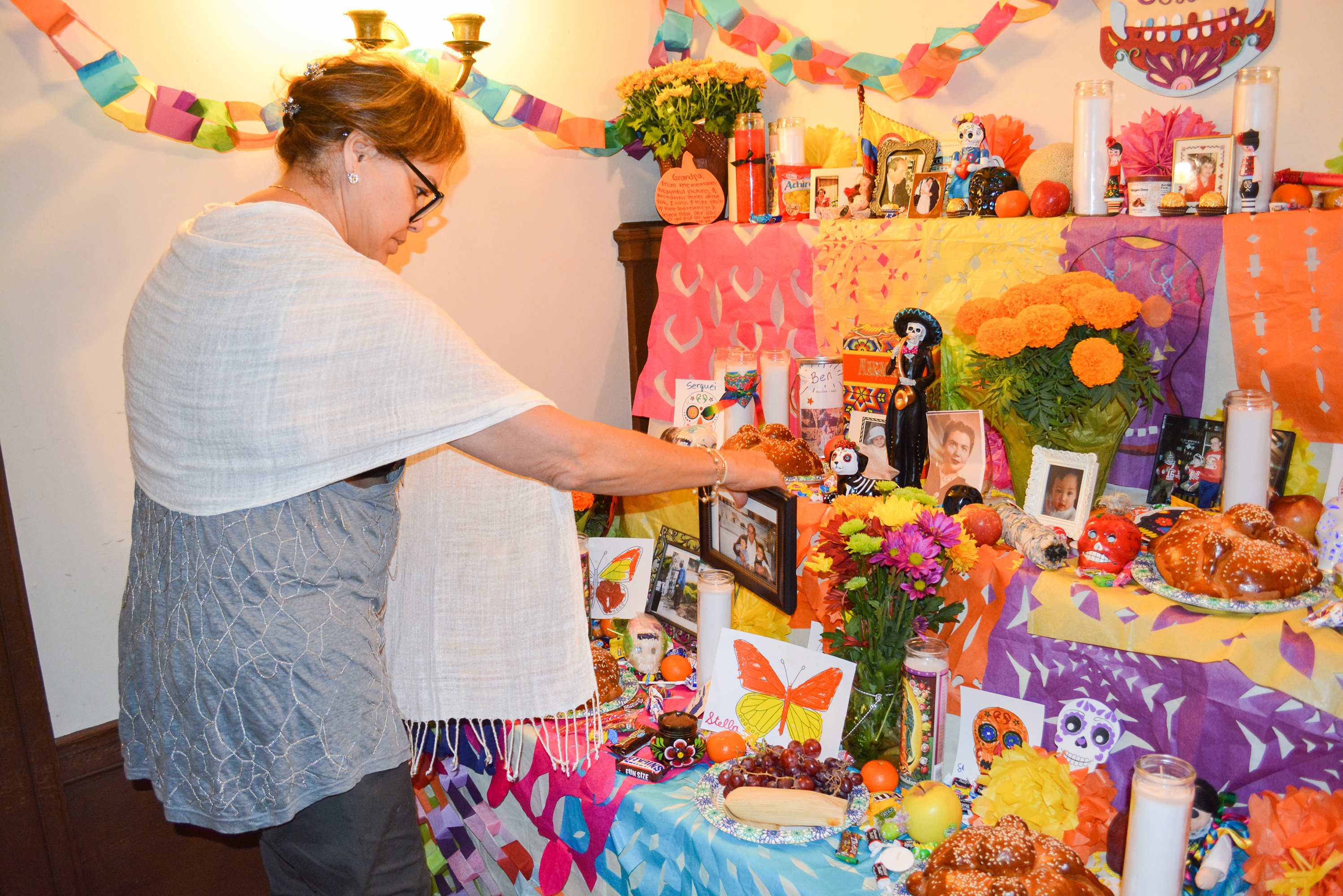 Kara Spanish program volunteer Lu Echeverria places photos, candles and sweets to the ofrenda altar which is built to honor family members and friends who have passed away, during a Dia de los Muertos event hosted by the Spanish language grief program on Oct. 26, 2018. Photo by Amy Armes/Kara.

Being a grief support person can be a heavy undertaking. Just ask Lupe Lujan. As a volunteer for the Palo Alto-based nonprofit Kara, a one-on-one session with a client dealing with the death of a loved one can unpack feelings of anxiety, fear and guilt.

Since joining the organization about three-and-a-half years ago as a bilingual volunteer for the Spanish program, she has become attuned to "el proceso de duelo," or the grieving process.

It's an experience she knows all too well, having lost her husband nearly four years ago to liver cancer. Six months after he died, she learned about the Spanish program through an announcement that crossed her path while she worked as a programmer for community radio station KKUP.

At the time, she felt ready to support others through their grief but soon learned she wasn't immediately ready to assist clients. Any time someone mentioned her late husband, she broke into tears. Lujan didn't start taking on clients until about a year and a half ago.

Nowadays, she regularly sees two clients — one of whom she meets with once a week and the other on a monthly basis. Breathing has become one of the invaluable practices that she has passed along to her clients to help clear their heads.

"We can build a lot of anxiety just thinking about our loved one or 'I should've done this' or 'I should've did it that way' or 'It was my fault,'" she said. After a few moments of deep breaths, they can get back on track and move along with their day.

This year, a $7,500 grant from the Palo Alto Weekly Holiday Fund backed the training of the 18 people who serve as Kara's Spanish grief-support volunteers. From graduate students to mental health professionals to retirees, the volunteers come in with diverse backgrounds, according to Executive Director Jim Santucci. One of the volunteers was previously a client herself.

All Kara volunteers undergo an initial 21-hour training spread out over multiple days followed by monthly training sessions. They typically have sessions with their clients, which span from South San Francisco to San Jose, in either one-on-one or group settings based on an intake session. This summer, the Spanish program launched an ongoing grief support program at the East Palo Alto Senior Center that meets on Monday afternoons.

The free program was created four years ago to serve the Spanish-speaking community, which makes up about 25 percent of the population in both Santa Clara and San Mateo counties, Santucci said. With these numbers in mind, the program was designed not just as a speaking service, but as a culturally attuned service.

"It's beyond a language. It's really providing the service in a person's heart language and why we chose Spanish versus another (language) because we feel that's ... one of the groups in the community that really was lacking," he said.

The Spanish language lacks a word for grief, which only touches on the surface level the differences of how the culture copes with death and loss.

The program's clientele comes from community outreach, referrals from other organizations or individuals and self-referrals. Some clients are single parents or working people with two to three jobs who don't have the time or resources to talk about grief.

In comparison to the volunteers who went through the first training class in the summer of 2015 out of curiosity, the current volunteers understand the power of grief support, Santucci said. The act of providing a service in their own language has become meaningful to the volunteers, some of whom never received the service themselves such as Lujan.

The Holiday Fund grant also have assisted the organization in holding its second annual Día de los Muertos, or Day of the Dead, celebration on Oct. 26 that drew 50 people to its Kingsley Avenue offices in Palo Alto. The event was developed by Kara's Spanish Services Manager Rosario Puga-Dempsey, who has long celebrated the holiday that holds a personal meaning for her. She thought it would be fitting for the organization.

"This is one of the holidays we often celebrate more than anything," Puga-Dempsey said of her family.

For nearly two weeks, the organization set up an altar where community members could add to the decorations, she said. The three-tier altar eventually overflowed with photos of the deceased, pictures of sugar skulls brought to life with neon colors, poems, flowers, tall white candles in glass containers, a variety of fruits, corn and carefully woven bread — all sitting on papel picado, or tissue paper flags cut into elaborate designs, in a rainbow of colors.

The event also served as an open house for the organization with food, music and face painting for children.

Puga-Dempsey recalled speaking with a Kara volunteer who helps with the organization's English services and was attending a Day of the Dead service for the first time.

"She expressed how wonderful it was to express grief in a different way," Puga-Dempsey said.

Day of the Dead rituals can be a launching point for clients in grief support sessions to discuss the layers of their loss. In family meetings, volunteers and clients discuss the idea of disenfranchised or unprocessed grief in which people can't attend the funeral for their loved ones who died in their native country, Puga-Dempsey said. It can also segue into other losses of other family members or friends dating years back or traditions to help with the loss, such as a novenario, or nine-day prayer. The sessions also can uncover stigmas attached to dealing with loss, such as the idea of being machismo or staying strong.

"One of the things we know to be true in this work is that although grief is universal, it's unique," Santucci said. "You can't fix grief, it's not something you can cure, it's something that you can give support to."

As the volunteer-driven program enters its fifth year, Santucci aims to continue increasing the program's reach, which this year served more than 500 people through sessions with clients, community education and outreach events. Given the program has built numerous connections, he hopes to see a decrease in outreach efforts and an increase in clients. He also wants to add additional staff members.

As a grief support volunteer, Lujan understands the role in supporting her clients who at times confide personal details they haven't divulged to their family.

"It's a little hard sometimes ... sometimes the tears do come out," Lujan said about the program, which isn't offered elsewhere in the area. "What's important is how you treat someone else or how you're there for someone else."

Learn more about Kara's Spanish grief support services through a video by the nonprofit that can be viewed here.


Changes or corrections to listings may be made by contacting Kali Shiloh at [email protected]kly.com.