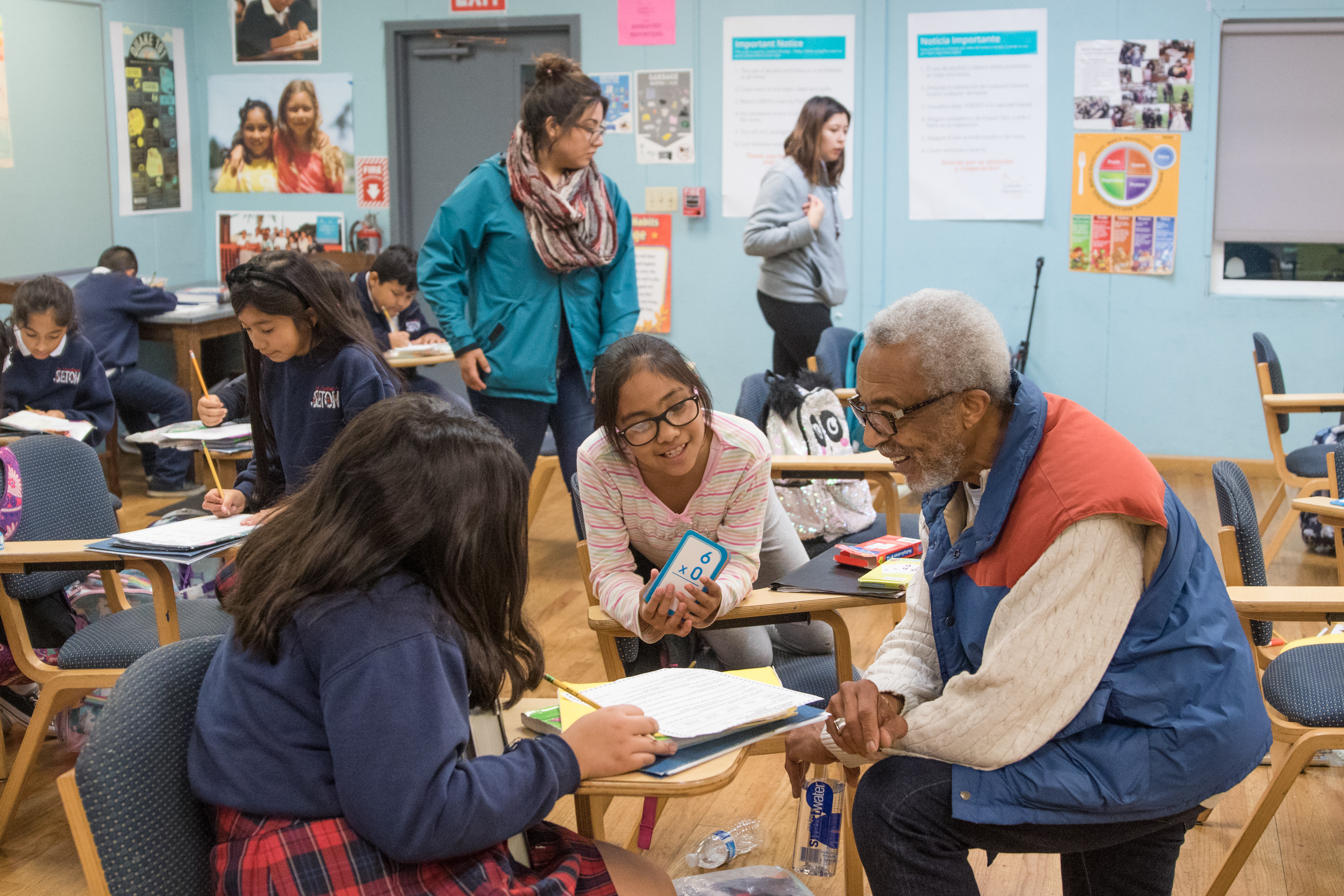 The two portable classrooms behind St. Francis of Assisi Church in East Palo Alto bustled with activity in the days leading up to this week's community Posada festival. Students in the Catholic Charities Youth Club were practicing songs and readings for the big holiday event commemorating Joseph and Mary's journey to Bethlehem.

In the adjacent classroom located across a large wood deck, more than a dozen fourth-graders gathered at the front of the room waving their hands high above their heads while singing "Jingle Bell Rock."

As soon as the clock hit 5:20 p.m., however, it became clear that the after-school club was about much more than just fun and games. The room quickly quieted down as the students found a desk, table or comfortable space on the floor to put themselves, opened their books and teamed up with a group leader or volunteer to practice their reading, writing and math skills.

For most of the students, the year-round academic enrichment program is the only place where they have access to a strong support system designed to help them overcome language, economic and other social barriers that otherwise might hold them back in life.

"We give kids as much support as possible to succeed," said Sarah Burton, division director of Youth and Child Development Services at Catholic Charities, which has operated the East Palo Alto program since 2015. "This is really a place where we can move (students) forward and help them see a better future for themselves."

The results have been significant.

Over the past school year, 85 percent of students in the program have improved their reading scores by two or more levels on standardized literacy tests, and 74 percent have improved their grades in math, according to academic information collected by Catholic Charities throughout the year.

At the start of the year, about 39 percent of students were reading below grade level, compared to only 9 percent by the end of the year, Burton said. She said some students advanced as many as six reading levels during the year.

Focused on closing the achievement gap, the nonprofit program this year was supported in part by a $10,000 grant from the Palo Alto Weekly's Holiday Fund. The students receive structured academic-enrichment activities with one-on-one tutoring, homework support, instruction from guest chefs, artists, environmental experts and other community partners, as well as meals and family counseling, if needed, during four hours after school every day and during the summer. The 80 to 100 students enrolled in the program receive about 336 hours of academic support each year. These services are all provided by five employees (including three who work part-time) and about 20 volunteers.

Initially launched in 2004, the program wasn't always focused on academics.

Lawrence Goode, a pastor at St. Francis, started the after-school program at the church to provide boys in the neighborhood a safe space to hang out after the community experienced a significant spike in gun violence in late 2003. Over the past 14 years, the program evolved from a safe haven for boys to a co-ed recreational center for students of all ages and then into today's accredited after-school program focused on literacy and math exclusively for third- to fifth-graders from six feeder schools in the Ravenswood City School District, which encompass East Palo Alto and a portion of Menlo Park.

"We really looked at the needs of the community and decided to focus our time and energy on younger students and closing the achievement gap," Burton said.

Studies show that students who can't read at grade level by third grade are more likely to drop out of high school and experience higher levels of poverty and crime, she said.

Based on those studies, "We see that many youth in East Palo Alto have a higher chance of becoming incarcerated than attending college," she added.

Most of the students in the program come from families whose annual incomes fall significantly below the poverty level, and about half of them are considered chronically homeless.

In addition to these challenges, many come from homes where English is not spoken, said program director Amy Hafter, who works onsite in the classrooms.

"While their parents are extremely supportive, they don't necessarily have the language skills to support them with their school work," Hafter said.

The program provides students that "little extra support to give them the confidence to be confident learners in the classroom," Burton said. "But it's not just about academics, it's about supporting this young person as a person and not just as a student. We take a holistic approach."

Hafter said the Youth Club also has helped foster strong family and community ties. Students from the six feeder schools, who might not otherwise know one another, are now spending time together while developing their social skills, she said.

Parents also play a large role in the program, she said. Those who can't afford the monthly $40 enrollment fee contribute in other ways, such as volunteering during special events or helping out in the classroom.

Hafter, who was hired this fall, said she hopes in upcoming months to partner with engineers and coders from Facebook and other local companies to bring their skills into the after-school club.

"Most importantly, this program gives children a vision," Hafter said. "When I grew up, it was a question of 'Where will you go to college? What career will you have?'"

That vision isn't always communicated to these students, she said.

"It's of pivotal importance that we give them the vision to move beyond their circumstances, to let them know that 'You, too, have opportunities,'" Hafter said.