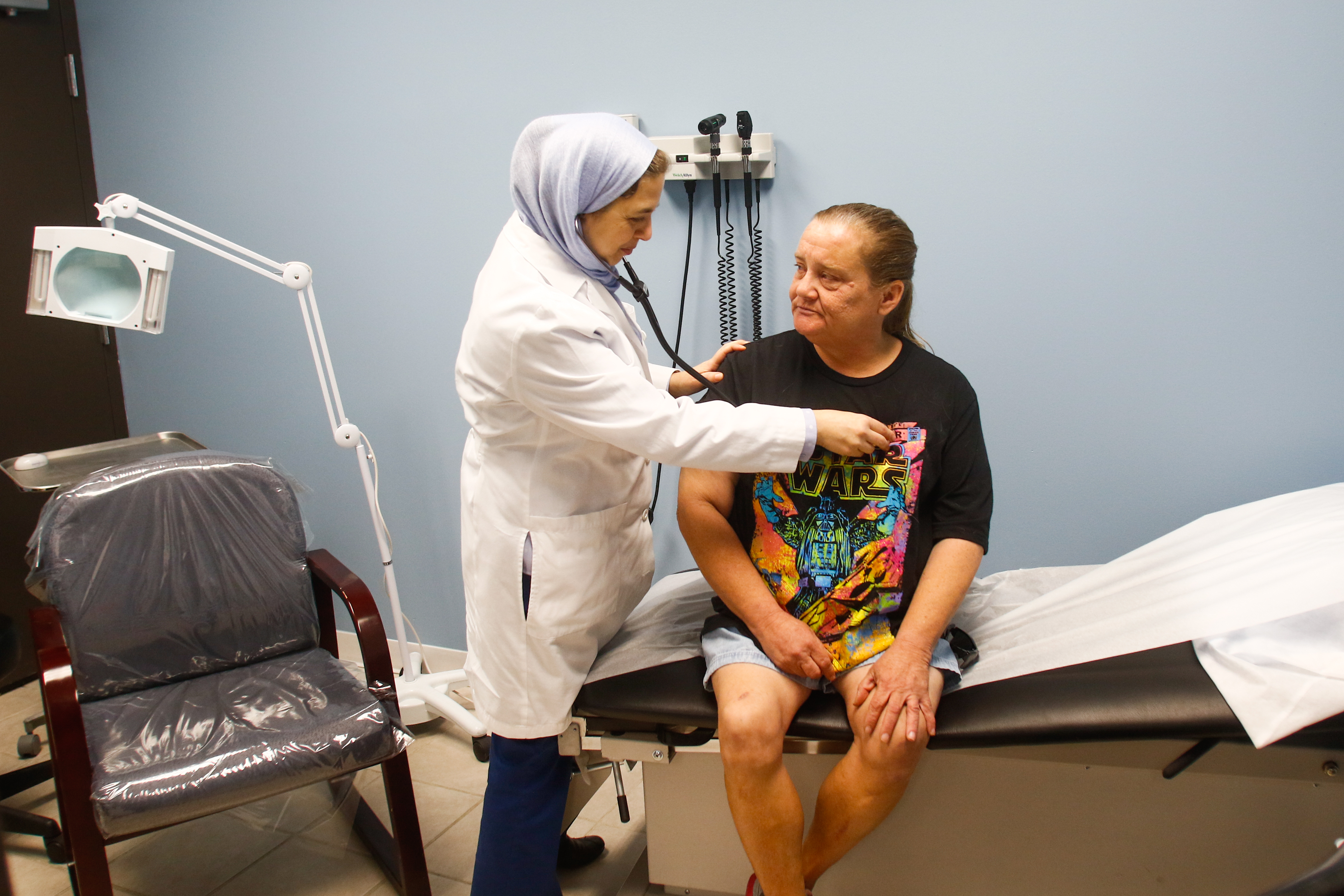 Darlene Berryessa was just 40 years old when her vision began to blur. She had no idea she had high blood pressure, but she was having a stroke.


Berryessa, now 54, also had diabetes, but she didn't know that either at the time. She hadn't seen a doctor because she could not afford one.

"I didn't have insurance," said Berryessa, an affable woman with long blond hair cascading below her shoulders.

But under the care of doctors at Peninsula Healthcare Connection, a free medical service in Palo Alto that serves people who are homeless or at-risk of homelessness, she is now thriving.

"My health is so much better. I don't know where I would be without them," she said.

Peninsula Healthcare Connection is the only state-licensed medical clinic in the immediate area serving homeless and at-risk people. The lion's share of such services are in San Jose, said Heather Boddie-Russo, clinical director of New Directions, Peninsula Healthcare Connection's case management program for individuals with complex medical issues and needs of psychological and social concern. 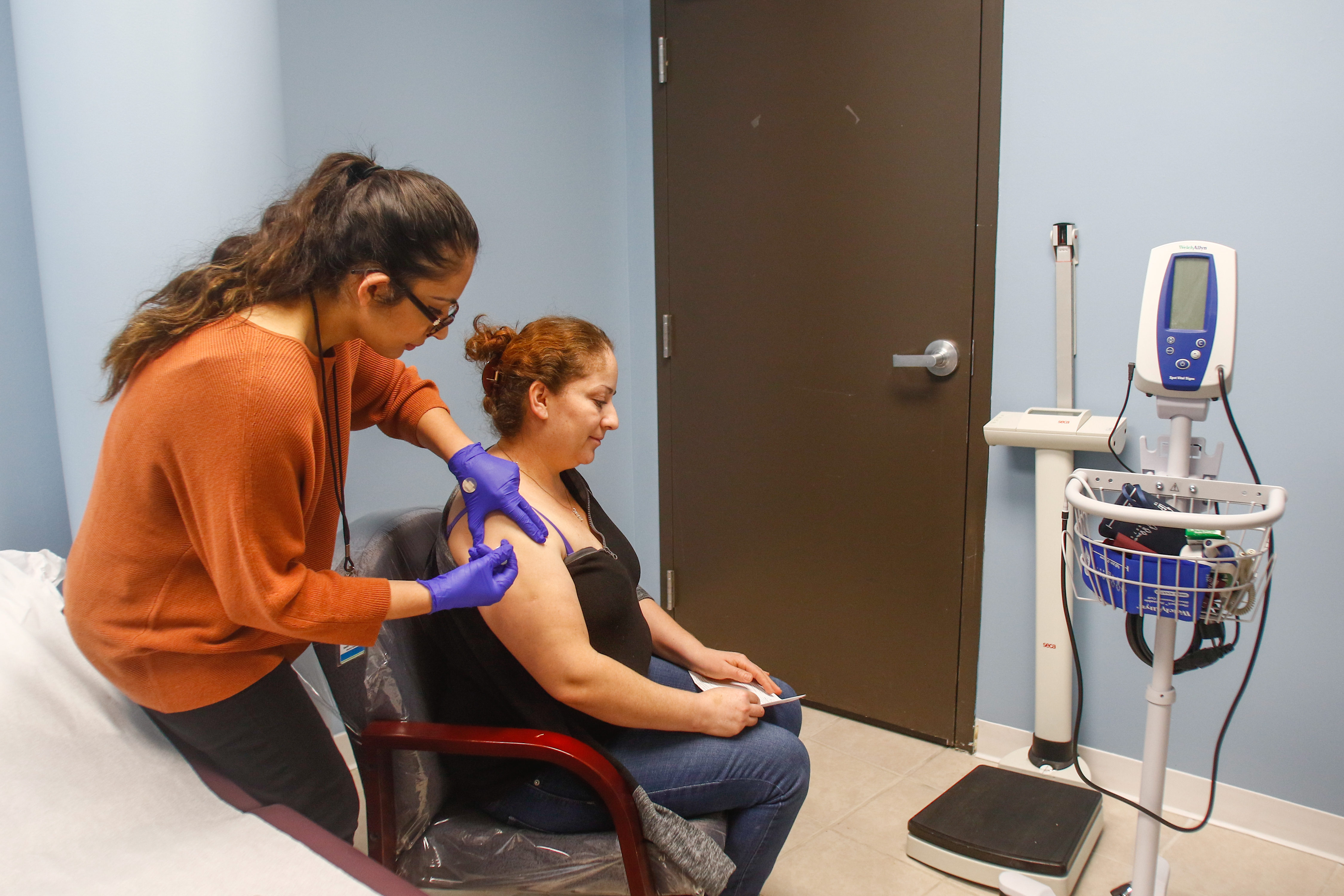 Sadaf Nagshbandi, medical assistant at Peninsula Healthcare Connection, gives Carla Perez a flu shot at the medical clinic at the Opportunity Center on Dec. 8, 2017.
"We're so grateful for having the clinic around. It really is the only spot up here," she said.

The clinic provides primary, preventative and mental health care regardless of a client's ability to pay.

In 2016, the clinic served clients through 1,218 primary care appointments and 532 psychiatry appointments. Ninety percent of patients are ages 19 to 64; 6 percent are 65 and older and 4 percent are 18 and under, Boddie-Russo said. The clinic has four volunteer primary-care physicians from the Palo Alto Medical Foundation and a part-time paid psychiatrist. About two months ago, it added a volunteer cardiologist, she said.

Peninsula Healthcare Connection received a $5,000 Palo Alto Weekly Holiday Fund grant last year for its medical supplies and laboratory-testing costs. The clinic has an annual budget of roughly $1.4 million for its comprehensive services, which include assessments, medical examinations and treatment, psychiatric services and case management.

Medical supplies, laboratory testing and vaccinations took up $34,000 of the annual budget. The Holiday Fund grant helped pay for diabetes test strips, tuberculosis-screening materials, immunizations and laboratory fees, which help to identify and treat these and other life-threatening diseases.

"The lab fees and immunizations are very expensive," Boddie-Russo said, noting that vaccines can cost up to $100 apiece. Lab fees last year were estimated to cost $21,500, according to the organization.

"The ability of Peninsula Healthcare Connection to purchase medical supplies and immunizations is dependent on this kind of funding," Boddie-Russo said. The clinic administered 270 immunizations last year, she added.

The lab tests are crucial to detecting serious underlying conditions such as those Berryessa has experienced.

Boddie-Russo said the clinic also supplies immunizations, including for pneumonia, flu, shingles, Hepatitis A and B and tuberculosis. TB testing is available to anyone, even if the person isn't a regular patient.

"Tuberculosis tests are really key, as in October when the county winter shelter opens, you must have it to get in. TB is a concern. We come across a lot of folks who have it, even if it is not active," she said. Berryessa said giving homeless people access to flu shots at the clinic has probably saved many lives. Her own mother died from the H1N1 influenza.

Having a psychiatrist on site helps to identify patients in need of mental health care. The psychiatrist also does emergency psychiatric evaluations, known as 5150s, and directs a patient to a nearby hospital if needed, she said.

Berryessa, who now works cleaning the clinic, said the clinic's mental health evaluation and treatment is a lifeline for many people.

"The psychiatrist here, he's the only hookup we've got to mental health services. He's helped to get a lot of us leveled out," she said.

Peninsula Healthcare Connection has made it possible to receive care at top medical facilities when necessary, Berryessa said.

"Because the doctors are affiliated with the hospitals, they are able to send a referral to Santa Clara Valley Medical Center and Stanford Hospital and to specialists for things like endocrinology and neurology. The student volunteers from Stanford Medical School also do rotations," Berryessa said.

She, her husband and her daughter now have housing through the Opportunity Center. The medical care she's received just downstairs has helped save her life.

"Everything has been perfect. They're amazing. This place has helped so many people," she said.

Boddie-Russo said the clinic's services may become increasingly important. As the housing crisis gets worse, county officials expect more people will be living in their cars or on the street, and they won't be able to afford health care. The crisis could also deepen if the U.S. Congress dismantles the Affordable Healthcare Act, she said.

"If ACA does go away, we are more important than ever because we will never turn anyone away," she said.