﻿ Are you ready to ditch disposables? | A New Shade of Green | Sherry Listgarten | Palo Alto Online |
Include Photos | Include Comments | Print this page | Close Window

Are you ready to ditch disposables?

Two years ago, in February 2020, I wrote about Palo Alto’s efforts to eliminate small plastic items at restaurants (straws, utensils), and more generally limit single-use disposable foodware. Then the pandemic hit and with it came an explosion of takeout and disposable trash. I followed up recently with Paula Borges, a project manager for Palo Alto’s Zero Waste program, to see how the waste reduction efforts are going these days. 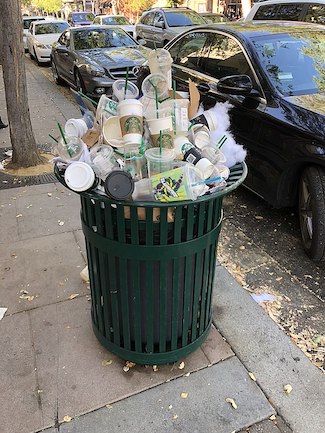 Palo Alto is lucky to have a passionate and committed team of people working to help the city’s residents and businesses reduce waste. It’s not an easy problem, but we are sick of generating so much trash. The city has a long tradition of leadership in waste reduction, being among the first to introduce recycling and then composting. But recycling and composting have their limits and incur a monthly cost for utility customers. One year of composting costs the city $2.3 million, and one year of recycling about $600,000. While we know that our composting works well, the city has been unable to verify that the mixed paper and rigid plastic (#3-8) we send overseas actually gets recycled. It could instead be getting landfilled or, worse, ending up in waterways or in loose piles on the land. 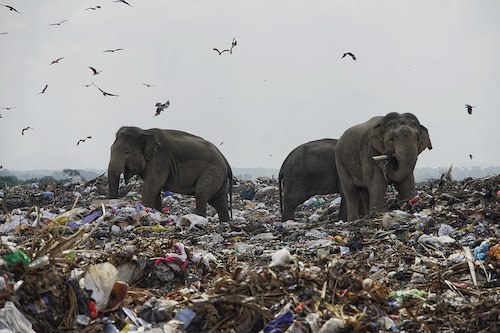 We want our recycling to be recycled so, as the Weekly recently described, Palo Alto is considering recycling those items in the United States. (1) We hope this would help to encourage more domestic markets, because other cities are interested as well, but it would at least temporarily increase the cost of our recycling to about $1.8 million, closer to what we spend for composting. (2)

This helps explain why the city’s parallel efforts to encourage Reduce and Reuse are so important. Not only does this keep our waste and our waste costs down, but reusing items also frees up the resources that would otherwise be needed to make new products. The city is doing a lot to help us with this, and today’s post focuses on how we can tackle the single-use disposables at restaurants that are overflowing our bins.

When I first wrote about this two years ago, Palo Alto had banned small plastic disposables (straws, utensils, bags) and was setting up to eliminate all disposables (plastic or not) at dine-in establishments, as well as any plastic containers used for takeout. (3) Borges said that with the pandemic, these plans were quickly put on hold. “The pandemic threw a curveball at the foodware ordinance. There was a fear of germs spreading and the restaurants had to focus on other things, like serving food safely, moving dining outdoors, and more. We wanted to cut them a break.” Even today there is no proactive enforcement of the plastics ban, though the city does follow up when there are complaints.

Our Zero Waste staff is finding other ways to move forward. The state recently passed AB 1276, which requires utensils, straws, and condiments to be served only on customer request. Online apps must allow customers to order them individually, and they must be opt-in. Items cannot be bundled. The city is holding meetings with stakeholders so it can determine how best to update its foodware ordinance to be in compliance with this new regulation.

More ambitious is the work the city is doing with a consultant, Rethink Disposable, to help restaurants that are interested in switching from single-use takeout and dine-in disposables to reusable items. Borges highlights the leadership of Tootsie’s in the Stanford Barn (and now Cantor Arts Museum). Proprietor Rocco Scordella was determined to reduce waste when he saw his trash cans filling up with takeout containers during the pandemic. He signed up with a foodware delivery service, analogous to a linen service, that would deliver dishes and then pick them up, clean them and return them. “It was amazing”, he said about the result in an interview with Marcia Gagliardi for Upstream. “Guests and customers are ready for a change. They understand that it is a problem.” He added that despite a $1 surcharge for the reusable containers, “I don’t think a single person has made a complaint about getting a container instead of a to-go box… People think it’s time to do something about this.” When compared with disposable compostable containers, the dish service Tootsie’s was using estimated it was generating 73% fewer emissions, 89% less waste, and using 70% less water.

The biggest problem Scordella had was getting people to return the containers, though he said that got better over time. Unfortunately, the service he was working with (DishCraft) recently went out of business, so he is looking for a new option.

Anh Nguyen of Oakland’s Cam Anh has been working with ReThink Disposable, and is effusive about the benefits of reusable foodware. She says customers like it because the food stays warmer for longer and tastes better. The “old ladies in the kitchen” have a much easier time taking out the trash, and they are no longer subject to fines when their bins are too full. Her restaurant is also saving money. Grace Lee of ReThink Disposable estimates that Cam Anh is keeping 32,140 pieces, or 860 pounds, out of trash each year, and saving about $1800. Nguyen said the savings have been helpful during the pandemic.

In Palo Alto, Borges mentions that Jing Jing, World Wrappes, and Kung Fu Tea are looking to replace some of their disposables with reusables. ReThink Disposable also did some work with Oren’s Hummus and Kirk’s Steakburgers before the pandemic. (Check out the links to learn more about what they did and the results they saw.)

We are seeing progress towards reusables in cafes as well. Two years ago Coupa Cafe and Verve were trialing reusable cups with the CupClub service (now ClubZero), and Borges says that Coupa and Blue Bottle are looking into something similar now. She is also thrilled that Starbucks has announced ambitions to move away from disposables. Starbucks encourages customers today to bring in their own mugs, offering a discount and using a carefully designed process. But in Seattle and elsewhere the company is trialing reusable cups that customers can borrow and then return at any Starbucks store.

In a test in South Korea, where the stores took away the disposable cups entirely, Starbucks estimates it diverted 200,000 cups from landfill in just three months. 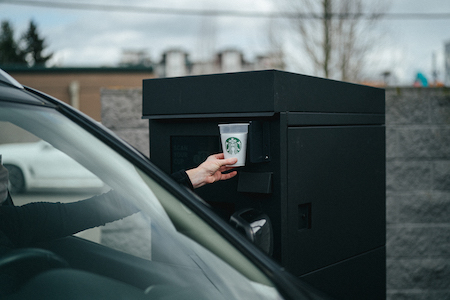 Borges says: “This is huge. It will have a really big domino effect in making reusables acceptable.” This could accelerate the market for foodware services and begin to lead us away from a throwaway culture.

I asked a barista at a Peet’s in Palo Alto if they are switching to reusables, but she was not aware of any efforts. She mentioned that their disposables are compostable, but acknowledged the cost of producing and then composting each of those cups.

Palo Alto will soon be hosting a brunch for restaurants to learn more about adopting reusable foodware, through their partnership with Rethink Disposable. Silicon Valley Reduces is another local non-profit that is trying to help businesses encourage customers to bring their own foodware.

1. City-wide yard sale. This year’s yard sale, happening on Saturday June 4, has over 220 participants signed up. Borges is happy to say that is even more than pre-covid levels. Stop by to see what you can find!

2. Hazardous waste reuse. The Hazardous Waste Station at 2501 Embarcadero Way has a reuse area that Borges says is very popular. “People seem to love it. They take paint, sprays, furniture polish, whatever is brought that the hazardous waste staff believes to be safe and reusable.” 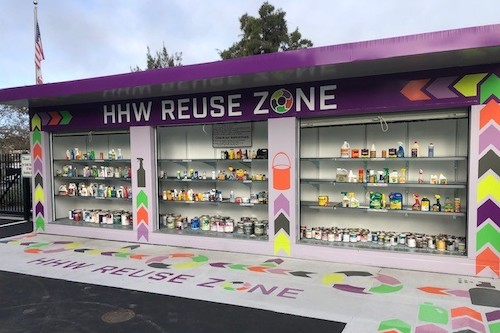 3. Party packs. The party packs, each serving 24 people, help residents to eliminate disposables at casual parties and other events. Borges says use dropped off precipitously during the pandemic, in large part because there were fewer parties, but she hopes to see it pick back up as there are more outdoor gatherings. 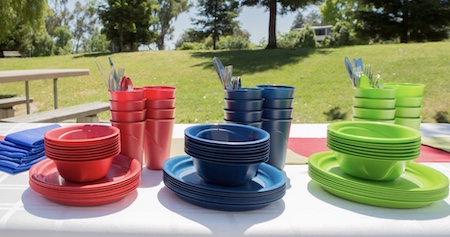 4. Cleanup Days. Palo Alto residents now get two Cleanup Days per year. Borges says participation is great, close to 40%, while when residents had to call to schedule it was around 2%. During Cleanup Days, the city offers to take in “gently used” items and find new homes for them. This has had mixed success. Many stores that took reusable items have closed, and items are not always of suitable quality. Residents can be unhappy when they see their loved items thrown away. Borges says that not all items are marketable, and a driver in a truck that picks up reusables makes the decision on what qualifies. Other avenues for used items are Freecycle, Nextdoor, Facebook’s “Buy Nothing” groups, and Goodwill.

I’d love to hear what you think about ditching disposables in restaurants and cafes, and what you think of the city’s other efforts to help us Reduce and Reuse rather than Recycle.

1. Palo Alto recycles cardboard overseas as well. Cardboard makes up about 40% of our recycling, and two-thirds of what we send overseas. But the markets for used cardboard are effective and profitable, so we are comfortable with how this component of our recycling stream is being handled.

2. There will be a vote at the June 6 City Council meeting on whether to proceed with negotiating a contract. (The expense itself is not approved with this vote.) You can find the relevant staff report here.

The city has also piloted composting some of the mixed paper. Whether that can be scaled depends on whether the Z-Best composting facility that we use can find a good market for the material.

Comment Guidelines
I hope that your contributions will be an important part of this blog. To keep the discussion productive, please adhere to these guidelines or your comment may be edited or removed.
- Avoid disrespectful, disparaging, snide, angry, or ad hominem comments.
- Stay fact-based and refer to reputable sources.
- Stay on topic.
- In general, maintain this as a welcoming space for all readers.