Manuel Martinez of LV Mar and La Viga opened his latest project, San Agus Cocina Urbana & Cocktails, in downtown Palo Alto on Friday, though it's not quite what he envisioned for the debut of his third restaurant.

San Agus, inspired by the street food of Martinez's native Mexico City, is open for takeout and delivery only at 115 Hamilton Ave. The renovated dining room, with a black-and-white tiled bar and playful mural that depicts images from Martinez's two worlds — Mexico and Silicon Valley — will sit empty until Santa Clara County allows restaurants to resume in-person dining with restrictions. 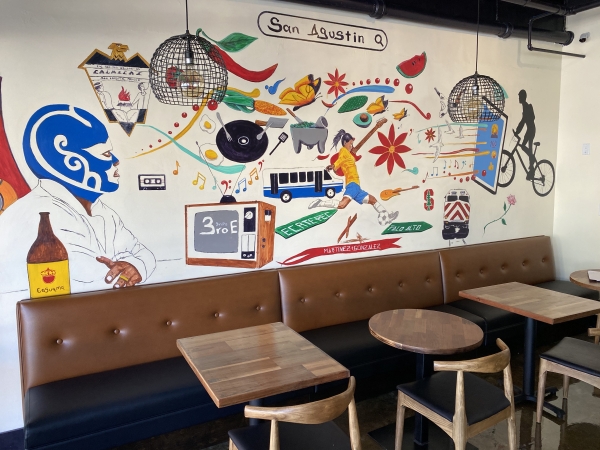 A mural inside the dining room at the newly opened San Agus. Photo courtesy San Agus.

The kitchen is serving about 60 percent of the menu Martinez had planned for the restaurant, which he named for his hometown of San Agustin in Mexico City. He's offering generous soft opening promotions (50 percent off all food and a free drink with each meal) that he likely wouldn't have before the shutdown.

Despite all the challenges facing restaurants right now, Martinez said he wanted to push forward with the opening of San Agus.

"The idea is to create some awareness and start building some followers so by the time things start opening at whatever volume we can, at least people are aware and we have some audience," he said.

"I'm the kind of person — I'd rather do something than do nothing," he added. "We have a lot of people that depend on us to work and to live. If we stay closed, we cannot do any of that." 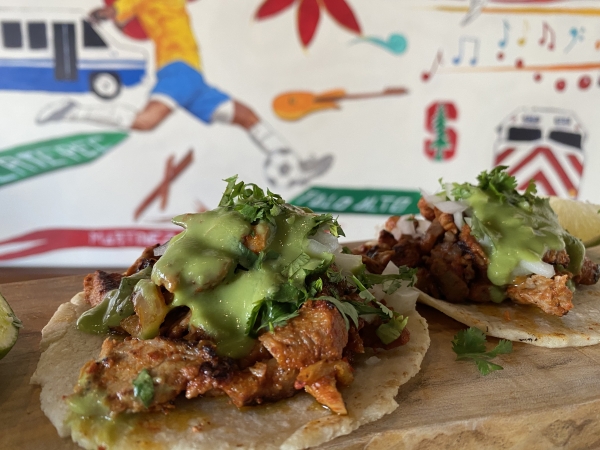 For dessert, there are plantain fritters with condensed milk, cookie crumbs, strawberry marmalade and sprinkles.

About the "& Cocktails" in its name -- San Agus is still waiting for its final Alcoholic Beverage Control inspection next week, so for now it's only mocktails, flavored drinks and Mexican sodas. The non-alcoholic "mercadito" comes with cucumber, sugar, water, rosemary, lime juice and Perrier mineral water. There's also a horchata with coconut, dubbed the cocohorchata.

Martinez noted that he technically opened not one, but three restaurants in the last two months. After the Bay Area's initial shelter-in-place order, he temporarily closed and then reopened his two Redwood City restaurants, first La Viga and then LV Mar a few weeks later as he figured out how to best adapt his businesses to a new reality.

"It's not easy but now we know the drill," he said. "We're excited, we're ready and we cannot wait for the government to let us fully open."

San Agus will be open for takeout Tuesday-Saturday from 3-7:30 p.m.