Did you know that all new buses purchased in California will be zero-emission starting in 2029? The goal is to have a fully zero-emission bus fleet by 2040. China is leading the world with 400,000 electric buses, while the US has just 300 (most of them in California). What will it take to transition all 12,000 buses in California’s public transit fleet, and what do we gain?

I had the pleasure of talking with Adrian Martinez about this topic. He is an LA-based attorney for the environmental organization Earthjustice, where he has focused on air quality since 2004. He has spent his career working to ensure that we meet our own “clean air” standards. That doesn’t seem like a high bar, but he has his work cut out for him. You can see how often air quality standards are not met in the LA area, over 140 days per year by current standards. 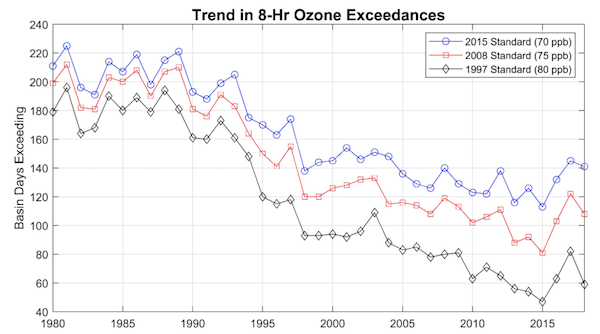 The problem has been getting worse over the past few years, in part due to warming temperatures. (1)

Buses and other large diesel vehicles are a big part of the problem. Mr. Martinez points out that the transportation sector not only accounts for 40% of our greenhouse-gas emissions, but also 80-90% of smog-forming pollutants. Trucks and buses are outsized contributors. While they represent only 7% of vehicles, they account for 20% of emissions, and are the largest single source of nitrous oxides (a precursor to smog) in the state. (2)

By electrifying buses, we can improve both our greenhouse-gas emissions and our air quality. We also address a persistent social inequality, since low-income households tend to live in urban areas and near highways where air quality is worst. Seniors, children, and people with asthma are most affected. Advocacy on their behalf by Mr. Martinez (aka the @LASmogGuy) and others has led LA to set a 2030 target for a fully zero-emission fleet, about ten years ahead of the state.

California estimates that transitioning our public transit fleet to zero-emission vehicles will be the equivalent of removing 4 million cars from the road by 2050. The buses have 20-25% the lifecycle emissions of diesel and natural-gas buses. (3) And while the cost of the bus can be 50-100% more up front, savings on fuel and maintenance make the overall cost similar. Bus and even utility companies are coming up with lease mechanisms that spread the upfront cost over a longer period. The real cost is in the charging infrastructure. As one example, Philadelphia found that it would cost $1.5 million to set up a substation near their bus depot to charge 20 vehicles. (4) The California Air Resources Board (CARB) has identified a number of sources of funding to help California cities get over the financial hump, but the difficulty of setting up adequate charging is slowing adoption of electric buses.

Other challenges with electric buses include hills and cold, which reduce battery range significantly. Bus pilots in several states have struggled to get the battery capacity they were promised due to these and other challenges, such as air conditioning. Mr. Martinez says the electric buses are getting better every year, but I asked him about hydrogen-power. He said those buses are very expensive, though their costs may improve in the same way that costs of electric buses have come down. Hydrogen fuel-cell technology is a clearer fit for trucks. Ports, for example, are very interested in using hydrogen to power their very heavy freight trucks.

Burlingame-based Proterra is one of the leading electric bus manufacturers in the US. The San Jose airport has ten of their buses running the short circuit around the terminals, parking lot, and rental car agencies. I tried one out the other day, and the bus seemed fine. I was a little surprised to find that it was not particularly quiet. In addition to the vibrations you would expect from a large bus, there was a pretty high whining sound at times, I think when it was accelerating. But the lack of belches of noxious exhaust is wonderful, both when you are being dropped off and also when you are driving behind the bus. 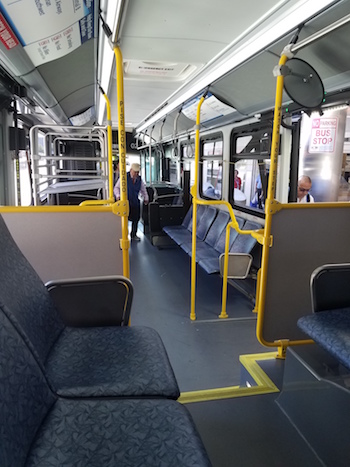 Interior of a Proterra bus at SJC

Electric buses are a win on three fronts: greenhouse gas emissions, particulate emissions, and environmental and health improvements for low-income households. So I asked Mr. Martinez what the biggest pushbacks are. We’ve already talked about the cost of the electricity infrastructure, which is considerable. Another objection is the rare earth metals used in the batteries. Biomethane is often pushed as an alternative for buses because it does not need new infrastructure. So-called “renewable gas” buses have higher emissions than electric buses, given their less efficient engines and methane leaks in production and distribution. Biofuel is costlier than diesel and somewhat hard to come by, so it is often blended with diesel, reducing the emissions benefits. How should we trade off the cleaner electric buses with their higher infrastructure cost? At the end of the day, Mr. Martinez says, we need to reduce demand for fossil fuels, and the sooner the better. Clean electric buses lean into the energy infrastructure of the future, and merit our investment. (5)

It is early days, but California is generally a good place for these buses and has set aggressive goals. The Los Angeles area is leading the way, but we are seeing some progress locally with SamTrans (ten buses promised a year ago, though SamTrans was not available to update me on progress) and the Mountain View Community Shuttle (see earlier post). School buses and delivery trucks are not far behind. (I cannot wait until the omnipresent UPS and FedEx delivery vehicles are electric!) This is a nice win for the health and livability of urban communities in particular, and for our planet more generally, as we build out our electric grid.

0. This is the third in a series of posts on buses. The first was on long-haul buses, the second on local buses, and this one is on electrification.

1. In the Bay Area, we are fortunate to have a much smaller issue with ozone (in the summer), and particulate matter (in the winter). You can find historical data here.

2. Information about the disproportionate contribution of trucks and buses comes from a writeup by the Union of Concerned Scientists.

3. The Union of Concerned Scientists has evaluated lifecycle emissions for different kinds of buses in different parts of the country (really, different power grids). This stat comes from this infographic, where our network is represented as WECC California (CAMX).

4. City Lab reviews here and here some of the challenges cities have in establishing an electric bus program. This fact sheet lists some of deployments (existing or planned) in the US.

5. The Union of Concerned Scientists has a recent fact sheet on biomethane, which argues that the best use of biomethane is to produce electricity or hydrogen for zero-emission vehicles, because those processes lose less energy, plus biomethane is relatively hard to come by.