﻿ Trashing the holiday? Not so much! | A New Shade of Green | Sherry Listgarten | Palo Alto Online |
Include Photos | Include Comments | Print this page | Close Window

Trashing the holiday? Not so much!

I’ve enjoyed looking at photos from my friends’ Fourth of July holidays over the past few days -- parades, ice cream, red-white-and-blue outfits, picnics, lakes, even a big tug-of-war contest.

But I haven’t shared my photos yet -- they are debuting right here in this blog post! Maybe you’ll understand why when you see what they look like. Yes, that is trash. 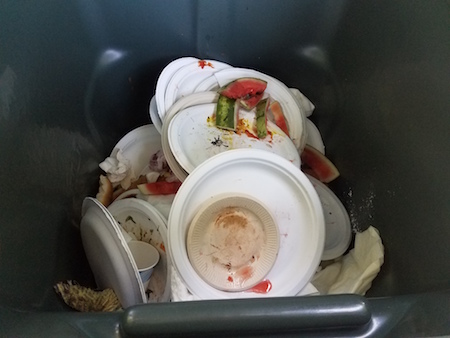 This calls for some explanation. My neighborhood in Palo Alto has a big festival each year for the Fourth of July, complete with races, parade, marching band, (mini) floats, barbecue in the park, bake sale, field games, etc. I have done various jobs over the years, including cleanup, and the amount of trash we generate is kind of gruesome. So I thought this year we’d give “zero waste” a shot. It was a long shot, but at least we’d try.

So we called the city to get extra compost and recycle bins and some signs, and they told us we should use waste stations. Nice! 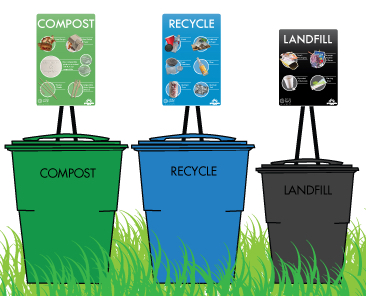 We signed up for some, hoping for diversion from trash into the compost and recycle bins. We also tried to reduce the amount of trash from the barbecue lunches (e.g., using paper plates and bowls instead of plastic, and offering chili as an alternative to bags of chips). We encouraged the bake sale bakers to avoid packaging their goods in plastic. We forewent (is that a word?) plastic water bottles and set up a water station with paper cups instead. And we made our own custom signs letting people know what trash goes where, customized for the lunch we were serving, and put them near the lunch line. 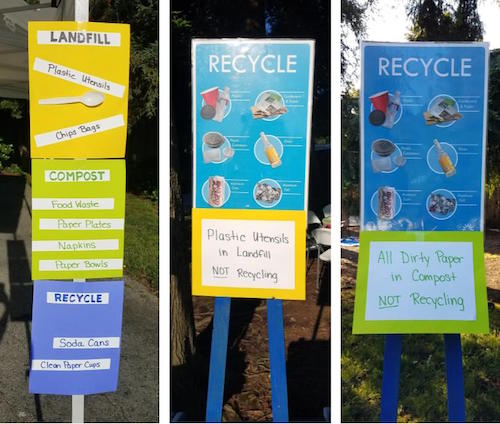 Then the party happened, the waste happened, and I took a bunch of pictures when it was over. Trash pictures!

So here’s what worked well and what didn’t work so well. In the end, we were more like “One Fifth Waste” than “Zero Waste”, but it was definitely an improvement.

1. The extra bins (aka “waste stations”) were a big win. The city delivered them the day before and picked them up a day later, so it was really easy. A neighbor, who doesn’t normally enthuse about trash, sent me a note saying “Those waste stations in particular were game-changers.” (For context, he has also done the cleanup job before…)

2. The signs really worked. The bins were much more sorted than they have been in previous years, where everything was basically a trash bin. And some people learned something new. (For example, did you know that plastic utensils go in trash and not in recycling?) Just a few days ago, the City refused to take our recycling because someone had put a lot of pizza boxes in it. Maybe that won’t happen again now! Here are some photos of the compost bins at the end of the day:

And of the recycling bins:

Not perfect, but pretty darned good...

3. Attention and intention made a difference. Just by paying attention at the bake sale, we reduced the amount of plastic and throwaway items. Most people brought their items on the baking trays, on paper plates, in reused containers. We displayed things on big wooden trays, which made it look more homemade somehow. Instead of using festive throwaway paper table cloths, we used real cloths (which happened to be green). It looked fine, and didn’t hurt sales at all. 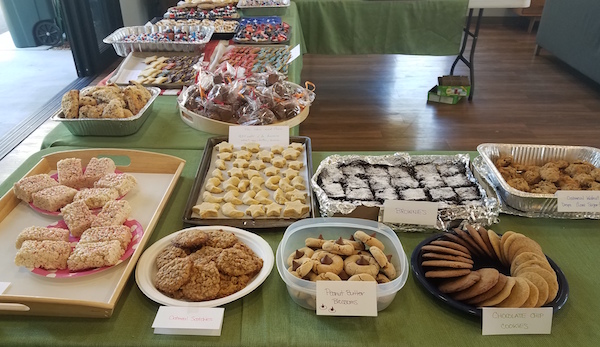 4. No one seemed to miss plastic bottles. The water station worked fine (well, until we ran out of cups), and there was also a water fountain as backup. 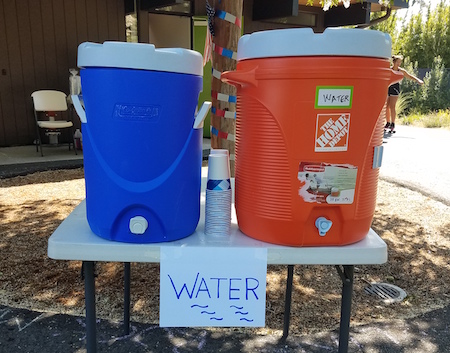 But we have room for improvement. Here are some lessons learned.

1. Simpler is better. It would have been easier if people who bought a lunch could have composted everything. As it was, plastic utensils and foil chip bags needed to go in the trash. Next year I hope we can at least do compostable utensils.

2. Plastic wrap is hard to replace! It was hard to avoid plastic wrap at the bake sale. Some people had to drop their items off early and wanted to protect them. Others wanted to wrap items so they were easier to take home.

We had waxed paper at the sale, but some items came pre-wrapped, and old habits die hard. Packaging was also an issue. One baker packaged her cookies attractively in cellophane bags with ribbons. They sold well. Another packaged her goods in compostable paper bags, which hid the items inside, and they did not sell as well. One purchased compostable plastic cups, for cut fruit, which looked fine but were expensive. Some used aluminum packaging, which we recycled, but it’s not ideal. So there were some tradeoffs here.

3. Plastic cups are everywhere. All of the cups we have in storage are plastic. So our sno-cones were sold in plastic cups, with plastic spoons. And when we ran out of cups for the water station, the only extra cups we had were plastic, which we didn’t want to use. We need to be sure that when we stock up, we use paper and not plastic, even if they don’t look as nice.

Coincidentally, my daughter sent me a text from her summer camp in LA yesterday. “Mom, is recycling #6 okay?” “Not really. Why?” “There’s like 3000000 of these cups. What’s wrong with paper anyway?” 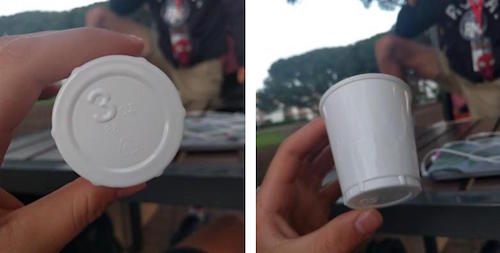 I love when kids pay attention to this!

4. So. Much. Trash. There is a seemingly endless number of ways that we create trash. How do you have otter pops or parade floats without trash? Many of our decorations are reusable and stored away each year, but some are single-use. And so on. So it’s fair to say this is a work in progress and we may not get all the way there.

But overall, we did okay. If you look at the contents of the trash bins at the end of the day, much of it was still in fact compostable or recyclable.

Do you have any observations about what you saw trash-wise on your holiday? A friend shared this photo of trash her kids scooped out of beautiful Lake Tahoe, of all places. Ugh. 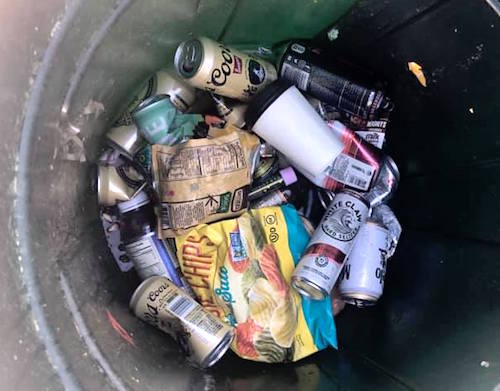 There were some comments on the last blog about the chili cook-off. Did that work out okay? The City put out a huge number of “waste stations” for it…

To sum up, I’d say I’m encouraged that small changes made a big difference, thankful that people seemed to care and do their part when encouraged, a bit awed by the sheer amount of throwaways we have embedded in our culture, and grateful that we live in a city that is trying to make a dent in this. Our neighborhood will keep pushing on this next year, and the kids may learn some new ways.