Redwood City residents Jason Simpson and Mike Hedlund opened the taproom in September. They took over the space after Back Yard Coffee Company closed. 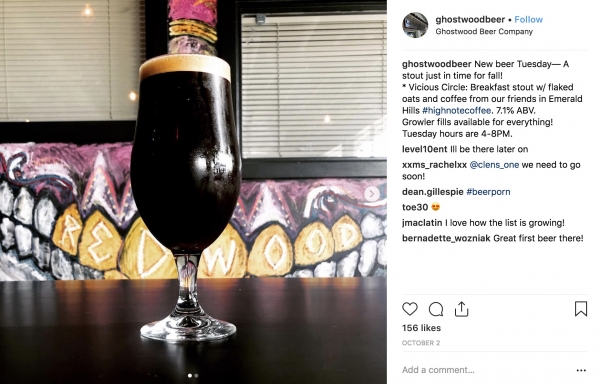 A photo of Ghostwood Beer Co.'s breakfast stout, posted on the brewery's Instagram.

"The idea was as simple enough as we wanted to have a good fun spot to drink beer and wanted to be able to have a say in the type of beer that we got to drink," he said.

Simpson and Hedlund both work in the technology industry but are avid beer drinkers. They teamed up with a creative director and head brewer to handle the making of the beer, which is done at a separate warehouse in Redwood City.

Several IPAs are on tap right now at Ghostwood, but they are “softer, hazier, fruitier” than traditional IPAs, Simpson said. Take the "Sho' Nuff," a milkshake IPA made that's with lactose sugar (no ice cream or actual) milkshake involved), dry-hopped and then mixed with local fresh fruit and Madagascar vanilla beans. The current batch has peaches from Country Rhodes Farm in Visalia.

Ghostwood doesn't serve food but customers are allowed to bring in outside food and the owners are looking at bringing in food trucks.

Simpson described Ghostwood as a "community brewery" specifically for Redwood City. Finding a space in the city was a non-negotiable for opening the brewery. It's name pays homage to Redwood City's history as a lumber town that was later full of fruit orchards.

"This is a thing for Redwood City," Simpson said.