A burger made entirely from plants at a Redwood City startup has been making waves at select restaurants in San Francisco, Los Angeles and New York — and now, in Palo Alto. 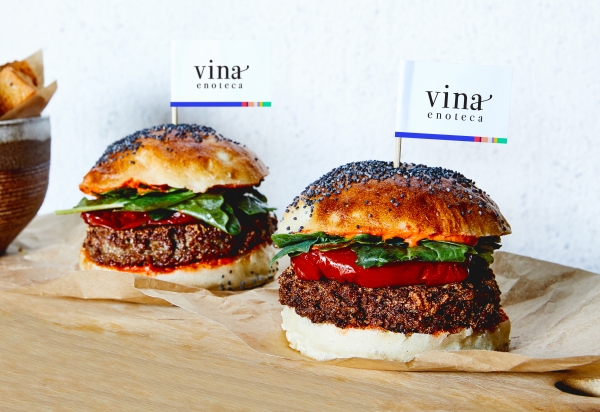 Impossible Foods announced Wednesday that Vina Enoteca is among three new restaurants who will now serve the popular meatless burger. The other two are in San Francisco and Oakland, where the company held a ribbon-cutting ceremony Wednesday for its first large-scale manufacturing site.

The facility promises a significant increase of production. When "fully ramped up," a press release states, the facility will be able to produce 1 million pounds of the Impossible Foods burgers per month — enough to supply 1,000 restaurants, compared to the 11 eateries that currently serve the burger.

Impossible Foods, which was started by a Stanford University biologist in 2011, makes its burgers from water, wheat, coconut oil, potato protein and heme protein, which makes blood red and mimics the "bleeding" of a juicy, perfectly medium rare beef burger. Glycogen, a carbohydrate; konjac, also known as Japanese yam; and xanthan gum are added to help hold the ground beef together. (Read more about the science behind the burger here.) 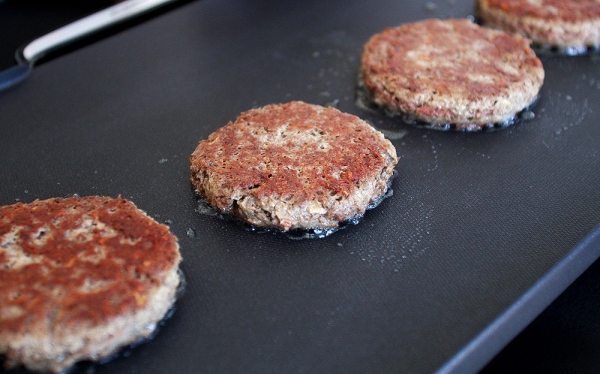 Meatless burgers made by Impossible Foods sizzle on the grill at a media open house at the company's headquarters in Redwood City in October. Photo by Veronica Weber/Palo Alto Online.

The goal is to not only make a veggie burger that tastes good, but one that is environmentally sustainable and ultimately will change the way we consume meat. Impossible Foods says its burger uses 75 percent less water and generates 87 percent fewer greenhouse gases than conventional ground beef from cows. It also has no hormones, antibiotics, cholesterol or artificial flavors and requires 95 percent less land to make than ground beef, according to the company. (The burger does, however, reportedly have high levels of saturated fat given the coconut oil.)

Each restaurant gets to develop its own spin on the Impossible burger. At Vina Enoteca, an Italian restaurant that opened on Welch Road in the Stanford Barn in November, it's served with sun-dried tomatoes, cavolo nero (or lacinato kale) and a sun-dried tomatoes mayonnaise on a poppy seed bun. It will be available as a slider at the restaurant's bar, Monday through Saturday from 5-9 p.m.

"We decided to work with Impossible Foods because I strongly believe in their mission and I love their product," he wrote in an email. "I believe this to be the future of food — (a) delicious plant-based burger that is good for the environment."

An Impossible Foods spokesperson said the company chose Vina Enoteca for the quality of its food and location (in that order).

"We were definitely looking for a place in the region where our investors, vendors, business partners, job recruits and other local supporters could go to try the Impossible Burger 'in the wild' — and we wanted to be in a place with total culinary credibility, lots of foot traffic and a diverse clientele," the spokesperson wrote in an email.

In the future, Impossible Foods hopes to serve its burger in a range of restaurants, from high-end to diners and takeout eateries. Eventually, the company also wants to sell it in retail stores.