Roadkill I280 – Definitely No Food Party

Approximately 1.3 million deer are hit by vehicles each year in the US., including one every three days on Interstate I280, according to the UC Davis Road Ecology Center. A dynamic duo of two committed women are trying to do something about it, and asking your help.

“It’s just carnage out there around 2AM - 4AM,” says San Jose resident and activist, Kathryn Harrold. I’ve driven 280 home late from work to find multiple deer over multiple lanes just mowed down. I’ve seen enormous blood stains on the road, followed by chunks of bodies: it looks like a war zone. But Caltrans goes out early in the morning to clean up the freeway so people never see it.”

In response, Harrold started asking questions, calling Caltrans, and even helped secure a 2009 grant to study the issue and determine what could be done.

It’s been two years since the completion of Interstate 280 Wildlife Connectivity Research Study: Findings and Recommendations, yet nothing has been done.

“The Land Trust of Santa Cruz County purchased 280 acres to build a wildlife corridor for the mountain lions, and Southern California is working on it too,” says Falsetto. “We would love a corridor on 280, but the first step is to just repair the big holes in the fences along the freeway, erect some new fence, prevent ramp access, and enact the other recommendations. Caltrans has the money allocated. The animals are more likely to follow the fence line to an existing culvert or underpass, rather than trying to cross the freeway.” 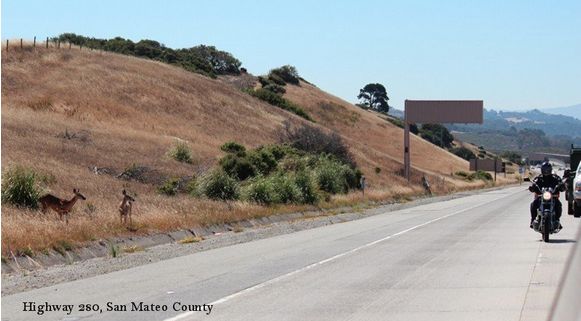 Harrold and Falsetto aren’t part of a nonprofit, but no one is working harder for solution then they are. These are two highly motivated ladies asking for input from local people, and support for California State Senator Jerry Hill who has written Caltrans asking for movement on the issue.

“Our goal is community awareness,” says Harrold. “This situation is dangerous for cars and for animals.”

What You Can Do
1. Write Caltrans Director Malcom Dougherty and District Director Bijan Sartipi to encourage action.

5. Watch 60 Minutes, The Mountain Lions of LA, to learn more.

6. Always drive carefully, but especially late night/early morning. You may think you're alone out on that dark and lonely road, but you're probably not.