While Ike Shehadeh, owner of Bay Area sandwich favorite Ike's Place, waits for the green light from the city to open a new location in downtown Palo Alto, he's also put in a bid for a new Stanford University outpost.

Shehadeh has been trying to open a new sandwich shop in Palo Alto ever since the contract ran out for his popular location in Stanford's Jen-Hsun Huang Engineering Center in 2014. (There was so much uproar over the loss of the sandwiches that students formed an organization called "Ike's Army" and held a protest against the university’s decision to replace the restaurant with Forbes Family Cafe. The new cafe serves "flexitarian fare of earth friendly and pure foods," its website states.) 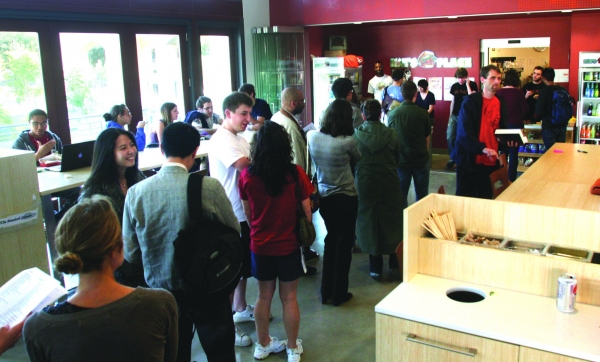 The line for the now-shuttered Ike's Place at the Jen-Hsun Huang School of Engineering building at Stanford University was typically long, sometimes stretching out the doors during lunchtime. Photo by Veronica Weber.

In October 2014, he put in a bid for a space at the Lathrop Library cafe, but it didn’t pan out.

Then, last June, he landed the lease at 401 Lytton Ave. in downtown Palo Alto, the former home of John’s Cafe. He planned to be open the next month, but said on Friday that he’s encountered a delay due to a technicality: Because Ike's will have less seating than John's Cafe did, and although it will continue to sell sandwiches and coffee like John's did, it's considered a use change, Shehadeh said.

"We should have been open in July and it's way past July now," he said. "I have literally no clue when it’s going to open."

He stands at the ready, though. Whenever he gets the green light, the new location can be open within 30 days, he said. They're doing some painting and installing a new ventilation system but other than that, it will be a quick turnaround. They would like to put in a take-out window to ease ordering congestion, but if it proves difficult to get permits for, they'll ixnay it, Shehadeh said.

The process, however, has deterred him from future locations in Palo Alto, especially considering the high rents in the area. Shehadeh said he originally wanted to open multiple Ike's Places downtown, "mainly because we feel like Palo Alto has really supported us in the past.

"The issue that's happening now doesn't make me want to go, 'let me go sign another … big-time lease and then have the city stop me for six months,'" he said. (Read more about the process for opening restaurants in Palo Alto: Key ingredient for opening a restaurant in Palo Alto? Patience.)

In the meantime, Shehadeh is making efforts to return to Stanford. Last Friday, Jan. 29, he submitted a request for proposal (RFP) for a space at the new McMurtry Building for the Department of Art and Art History. The building, located at 355 Roth Way, near the Cantor Arts Center, opened to students for the first time in fall of 2015.

The space there, however, only has a TurboChef oven that doesn’t make a lot of sense for a place that could be churning out hundreds of high-quality toasted sandwiches every day, Shehadeh said. (It’s more appropriate for an operation like Starbucks or La Boulange, he said.)

So this would mean a "cold version of Ike's" — no toasted sandwiches — and a limited menu, Shehadeh said. There would be four to five staple sandwiches always available, like the popular "Menage A Trois" (Halal chicken, BBQ sauce, honey mustard, honey, pepper jack, cheddar and Swiss cheese) and the "Matt Cain" (roast beef, salami and turkey with Ike's "Godfather" sauce and provolone cheese), plus five or so that rotate. 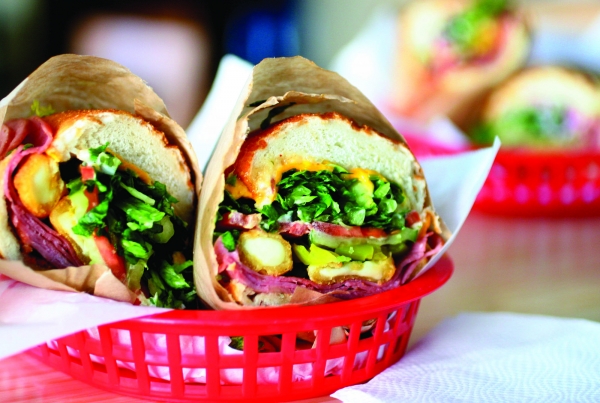 This would be a marked difference from most Ike’s, where the ever-growing, 70-plus item menu is overwhelming (in a good way).

But this Ike's would also have something new: grab-and-go sandwiches. Shehadeh said they tested the concept at spring training last year and it was a "phenomenal success." (This year, they’re returning to do it for the Oakland A's, and hoping to also sign with the Chicago Cubs and San Jose Earthquakes, Shehadeh said.)

At the potential new Stanford outpost, there would be several cold sandwiches for sale — chosen or designed specifically because they will sell well cold and all made within the last hour. You might see, for example, a pastrami, cream cheese and "Jim Harbaugh" sauce sandwich that’s best served cold, Shehadeh said. The grab-and-go sandwiches will be slightly cheaper than the made-to-order ones, from $7.50 to $9 instead of about $8 to $10.

With no toasting of sandwiches and some customers expected to be taking advantage of the grab-and-go option, Shehadeh said he expects wait time at this location would be cut down. A common complaint about the Engineering Center location was that there were very long lines.

The new Ike's would also sell coffee, to-go salads, snacks and desserts. Shehadeh said he’s in the midst of acquiring a cake company and would hope to serve their goods.

If the grab-and-go concept (dubbed "Ike'spress," as in "Ike's Express") is successful, it would open up many doors for the company in spaces that previously were prohibitive due to a lack of cooking equipment, Shehadeh said.

He said he's not sure what the timeline is for the Stanford bidding process; stay tuned for updates.

Ike's, which was born in San Francisco in 2007, has steadily grown to almost 20 locations throughout the Bay Area and southern California. New locations on their way this year include Santa Barbara, San Diego and Chico, Shehadeh said.