In awe in Yosemite

Last week I accompanied a group of Paly students to Yosemite National Park. Seventy five freshmen, all students in Paly’s TEAM (Together Everybody Achieves More) program, spent a week at Yosemite with the Nature Bridge program. In groups of 12-15 students, which included a 12th grade student leader, and teacher and/or parent chaperone, we were guided about the park by environmental educators who taught us everything you’d ever want to know about Yosemite, including the park’s geological history, the life of Native Americans that inhabited the valley, how the current drought affects the park, and how the land came to be a national park. We also attended lectures on climate change and a talk about the cosmos.
In addition to the academic pursuits, the groups played trust games and embarked on group challenges, such as leading one another through a pitch-black cave. Our group participated in a service project of clearing brush, wielding saws and massive clippers, while learning about controlled burns. The kids loved scrambling up paths of boulders, building snow men and molding the perfect snowball, but the highlight of the week was a hike up 700 icy steps to a waterfall, each student taking turns being the leader, setting the pace and looking after the group.
Spending a week outdoors in such majestic beauty and in the company of energetic, bright teen-agers is profound. Most of the kids in my group did not know each other well on day #1, but by day #6 had become a cohesive unit that celebrated the accomplishment of finally being one of the first groups ready for the 7am breakfast roll call. We relished the shorter lines and choice of seats in the cafeteria that morning!
We marveled as the brilliant fall colors transformed to branches and leaves coated in white glistening snow after the season’s first snow fall, and walked through a meadow, the sky thick with heavy snowflakes, admiring the first snow flake to stick instead of melt on a mitten.
I watched my group become more comfortable and confident in the out-of-doors, and trusting and caring towards one another. We enjoyed the stunning views from our hike, the icy puddles that shattered with a stomp, the crow that loudly scolded us during the quiet reflection and writing time, the crisp apple for snack, and the joy of the unexpected flush toilet. At times we were all wet, cold, tired and sore, and unenthusiastic about a lunch of cold tomato paste on tortillas, but there was no whining or complaining, just a whole lot of laughing and learning. 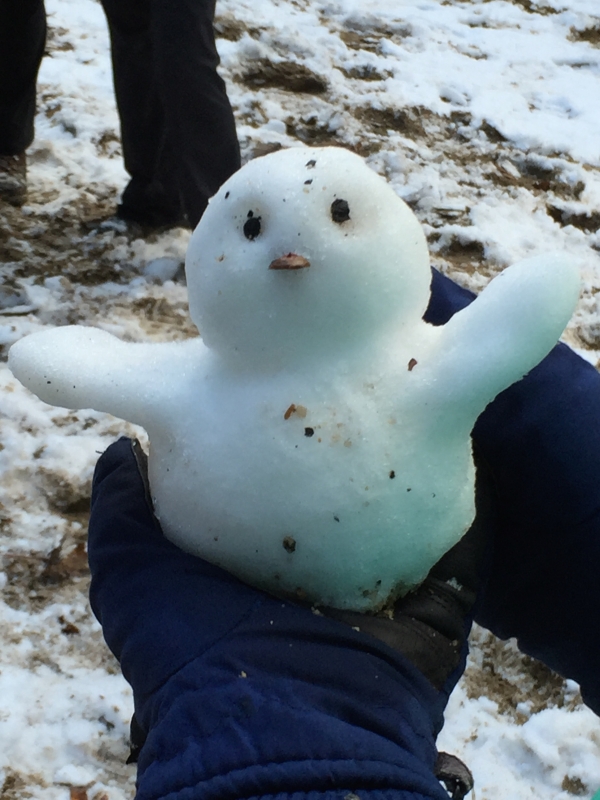