After almost three decades of serving traditional Italian food in downtown Palo Alto, the Piccinini family is turning over the keys of their restaurant, Osteria, to another longtime local restaurant family.

Giuseppe and Mauricio Carrubba, whose father owns Caffe Riace on Sheridan Avenue in Palo Alto, are the new owners of Osteria, the name and spirit of which they're maintaining, said Greg Piccinini, who co-owned Osteria with his father, Angelo Piccinini.

Greg said Friday that the sale was motivated by a desire to spend more time with family.

"It was really about not making my close friends and family restaurant widows and widowers any longer," Greg said. "Maybe (it's) not that dramatic but at a certain point ? we don't have a breakfast, but having lunch and dinner occupies you from early in the morning potentially to late at night."

Greg met Giuseppe and Mauricio's father Franco more than a decade ago. Franco asked Greg, who had been working in Osteria since he was 22 years old, to show his older son, Giuseppe, the restaurant ropes. Giuseppe was an undergraduate student at Santa Clara University at the time, Greg said.

The two Carrubba brothers went on to help their father open Caffe Riace in the 1990s, (though they're no longer involved with the restaurant) then various cafes on the Stanford University campus and later their own catering company, Just Catering, which they recently sold. Franco also took over a historic Half Moon Bay grocery store in 2007, embarking on a rocky business deal and journey in the community.

Greg said he's confident in the brothers, who over the years have developed a "top-to-bottom understanding from sandwiches to fine dining (and) things in the middle."

"I've really admired the way they've gone about their business so when it was decided between my father and I that we would have to sell, I called up Giuseppe," he said.

Greg said the Carrubbas have kept the Osteria staff intact as well as most of the menu, besides eliminating a few items. The two head chefs have been with the restaurant since the beginning, as well as some waiters. 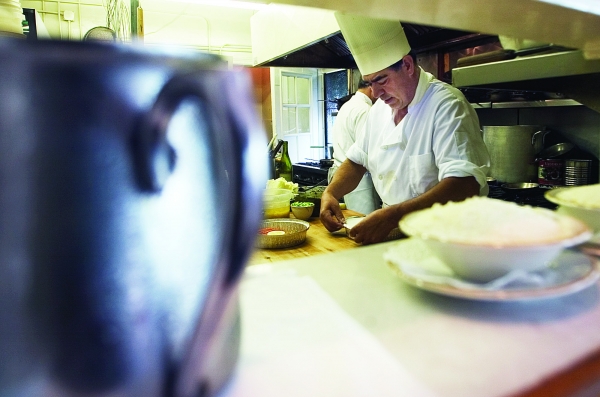 The Carrubbas also did some interior upgrades over the last several weeks.

Osteria, which opened at 247 Hamilton Ave. in the bottom floor of the Cardinal Hotel in 1986, was one of many restaurant ventures for Angelo Piccini, who came to the United States from Italy as a teenager and is now in his 70s. 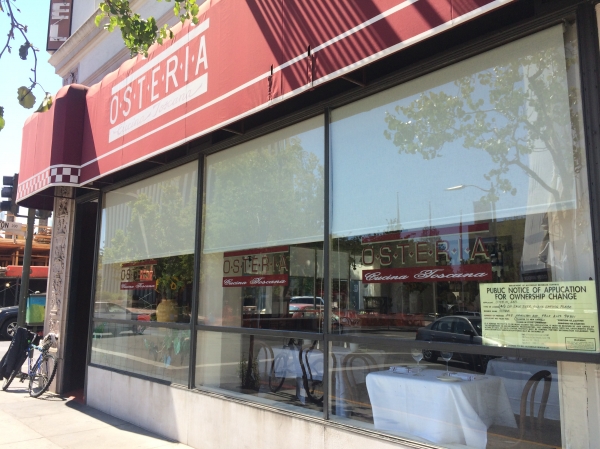 The exterior of Osteria at 247 Hamilton Ave. in Palo Alto.

Angelo got his start busing tables at restaurants in North Beach in San Francisco, according to the restaurant's website. He later opened several San Francisco restaurants with a cousin before moving to Palo Alto.

Next came Osteria No. 2, opened in 1989 in Presidio Heights in San Francisco.

Over the years in Palo Alto, in the midst of so many trends and restaurants coming and going, Osteria has been remained a reassuring constant for many diners.

"What we tried to do was offer a clean environment with traditional food at a reasonable price. That was kind of our hope and our formula ? not try to chase trends and things like that," Greg said.

He said the restaurant is in good hands with the Carrubbas, who he believes will faithfully continue the Osteria legacy.

"It's been a part of my heart for so long," he said. "I'm not shocked; I'm not sad; I'm not overly happy. I'm just very content and matter of fact that the timing was right."

Read more about Osteria and Caffe Riace in these past restaurant reviews, reaching all the way back to 1998:

Plus, a Q&A with Osteria chef Melesio Campos in 1997: One part simplicity, two parts imagination