Palo Alto's only high-end hot dog eatery, Chez Franc, closed its doors for good after dinner on Saturday evening, owner Jacquetta Lannan announced in an email to the restaurant's Kickstarter backers on Monday.

"I'm writing today to tell you that Chez Franc has sold its final hot dog," Lannan wrote. "Chef Dan (Sung) and I decided last week that things weren't working out as well as we hoped, and closed our doors permanently after dinner on Saturday. Even though we served thousands of customers and doubled our sales from our opening in January, the restaurant continued to struggle." 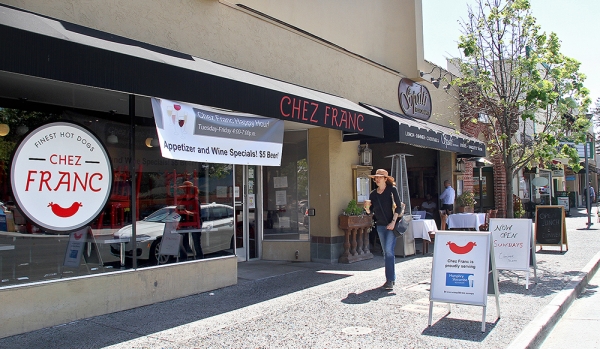 Chez Franc at 415 California Ave. closed after four months of business on Saturday, May 9. Photo by Veronica Weber.

She had landed the lease for the space (the former home of Know Knew Books) back in September 2013, aiming to open in December or January, she said at the time. Along the way, she snagged Dan Sung, a longtime sous chef at Michelin-starred The Village Pub in Woodside, to be Chez Franc's chef. (Lannan interned at The Village Pub after graduating from the International Culinary Center in Campbell.)

In August 2014, Lannan opened a food truck to get her artisan hot dog concept out to the masses earlier than the brick-and-mortar opening process would allow. (The truck was later retired after the restaurant opened.) She launched a $37,000 Kickstarter campaign the same month, successfully securing the money needed to purchase a new meat chopper, sausage stuffer and smoker.

Just two months ago, Chez Franc slashed its prices by several dollars, from $6 to $13 per dog instead of $12 to $15. Other menu items' prices also went down. Lannan said this was both in response to negative feedback that prices were too high and a result of making their own dogs in house rather than buying.

The Palo Alto Chamber of Commerce recognized Lannan this year as one of Palo Alto's most influential businesswomen, naming her the first recipient of the new Athena Young Professional Leadership Award. The Young Professional Leadership Award honors emerging leaders who demonstrated excellence, creativity and initiative in their business or profession while contributing time and energy to improve the quality of life for others in the community.

"We are all sad that this restaurant didn't succeed in the way we hoped," Lannnan wrote in her email to Kickstarter backers. "However, please be proud of us for taking a bold leap and following our dream; I know that I am."