First, it was a theater, then later, a Borders bookstore, and now, a high-tech hub and Blue Bottle Coffee cafe.

The latest incarnation of the Varsity Theatre, built in 1927 on University Avenue in downtown Palo Alto, is the brainchild of German software company SAP, which occupies a campus on Hillview Avenue in Palo Alto. The new hub, called HanaHaus, is "a community of purpose defining a new café experience where creative individuals and entrepreneurs can come together to meet, socialize, share ideas and connect with experts," the project website reads.

For those who are most excited about the cafe part (including yours truly), San Francisco coffee-favorite Blue Bottle will be opening its first Peninsula location inside HanaHaus this Thursday, March 19. 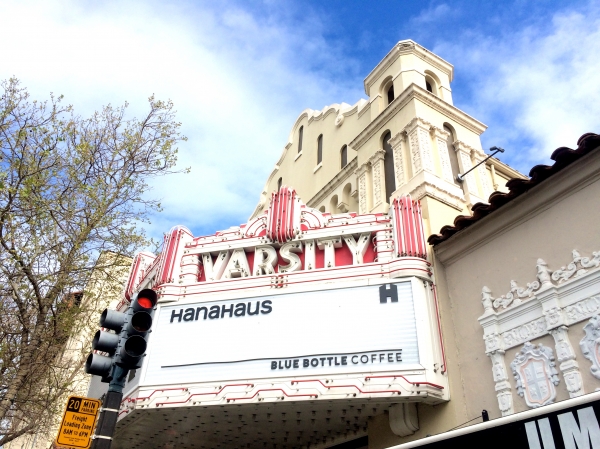 Coming soon to a theater near you: HanaHaus and Blue Bottle Cafe.

Third-wave coffee pioneer Blue Bottle got its start in Oakland in 2002 and now operates more than 10 locations in the Bay Area, East Coast and more recently, Tokyo. Blue Bottle still honors a vow made by its founder, James Freeman, when he first opened: ""I will only sell coffee less than 48 hours out of the roaster to my customers," the company's website reads.

The Palo Alto location will serve baked goods as well as coffee and espresso from a drip bar, a Kees van der Westen Spirit espresso machine and a mini-keg filled with Blue Bottle's signature New Orleans iced coffee. They're stationed inside the theater on the first floor, which was modified to accommodate the cafe, but there's plenty of outdoor seating as well in an interior courtyard.

"HanaHaus is the perfect location to house the first Blue Bottle Coffee in the heart of Silicon Valley," Freeman said in a press release. "SAP's innovative thought process in creating a space that will foster creativity and collaboration is what Palo Alto is all about, and ultimately what Blue Bottle represents. We couldn't have found a better fit for our first venture on the Peninsula."

HanaHaus is also envisioned as a space for speakers, music, "innovation showcases" and other events. SAP is hosting an invitation-only grand opening Tuesday evening with speakers, a panel on "Creativity, community and the links between the two," and "innovation experiences" ("Make a paper circuit" with The Tech Museum of Innovation, "Next-generation robotics" with the Gunn Robotics Team, "Get into design thinking mode" with Stanford d.school students or "Chat with a remote attendee" from Suitable Technologies). There will, of course, be coffee.