Every year, the Steinbeck Fellows program at San Jose State honors three emerging writers with a ten-thousand-dollar stipend intended to give them time to finish a book project. The program was inspired by a small monthly allowance Steinbeck received from his father that sustained him before his first commercial success. The Fellows program is now nearly 15 years old, and our Fellows have published dozens of books. This Wednesday we welcome back Julia Reynolds, a 2010 Steinbeck Fellow, as she presents her new book, Blood in the Fields: Ten Years Inside California's Nuestra Familia Gang. 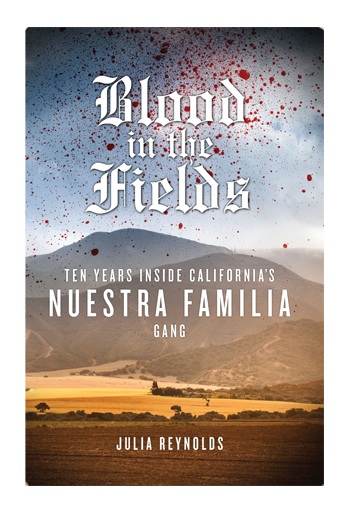 Ms. Reynolds works as a reporter for the Monterey-Salinas Herald, and she used her Steinbeck Fellowship to step back from her reporting to work on this manuscript. As the subtitle suggests, she has been cultivating sources inside the Nuestra Familia (Norteño) gang for over a decade, giving her access to material otherwise available onto to state and federal investigators. She tells the story of the gang from the inside out, following a web of fascinating characters: ordinary gang members and their families, gang leaders, lawyers, cops, and even a few old-timers who escaped the gang's reach. Her portrayals are honest and sometimes brutal. Fellow reporter Alfredo Corchado of the Dallas Morning News calls the book "a fascinating yet troubling look at a generation grappling with identity."

It is an astonishing story, alternately thrilling and heartrending, in which there is no clear division between the good guys and the bad. Reynolds attempts to show us how the most hardened criminals got that way, and how even cold-blooded killers might have good intentions some of the time. Her portrayal of law enforcement is equally ambivalent: federal agents are shown to be ambitious to the point of carelessness, and perhaps even guilty of negligence when informants go bad.

On Wednesday night at 7pm I will interview Julia Reynolds in the Center for Steinbeck Studies at SJSU's Martin Luther King Library (Room 580). The event is free and open to the public. I hope you can be there.