Palo Alto Brewing Company is celebrating its fifth year of business in appropriately hoppy style with a birthday IPA, released on draft only at select locations today, March 10.

"For our birthday brew we are going for something tasty and easy to drink," said owner Kasim Syed. "(We're) not taking our fifth too seriously with a barrel aged something or a triple/quadruple IPA. This IPA is a slight departure from the citrus and pine flavors we have recently been doing."

It's brewed with a relatively new hop, called Belma, that yields fruity flavors like strawberries and melons, Syed said. Belma grows in a farm in Washington State's Yakima Valley and has only been commercially distributed since 2008.

The Birthday Brew is also lighter; around 7.5 to 7.8 ABV (alcohol by volume).

For a limited time ("Just like everyone's fifth birthday, it will be a one time thing," Syed said), you can sip on Birthday Brews at the Rose & Crown Pub in downtown Palo Alto, Bierhaus in Mountain View, Ale Arsenal in San Carlos, Whole Foods on Rhode Island Street in San Francisco and Grape & Grain in San Mateo.

The bottle's label celebrates five years of business, with each figure from the company's seven brews present: 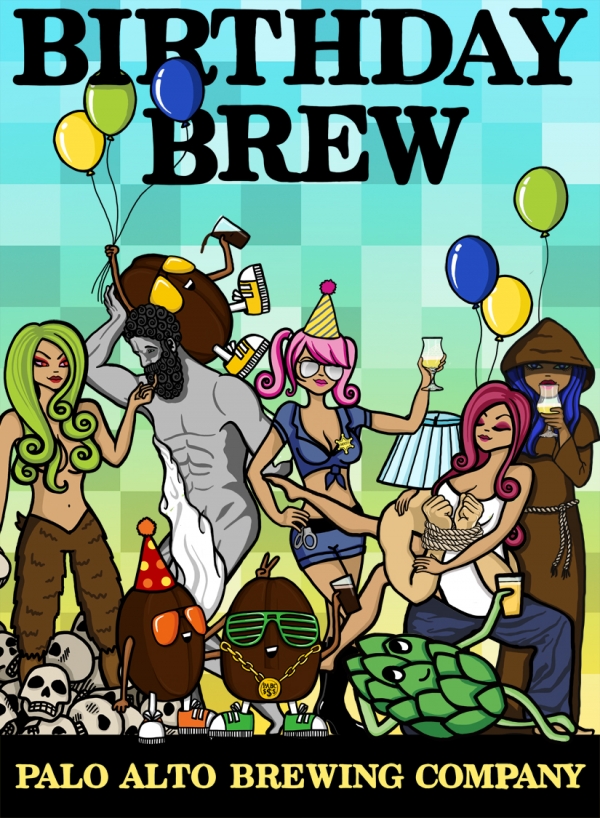 Syed, a Palo Alto native, didn't set out to launch a brewing company. A Rose & Crown employee-turned-owner, he started by bringing home and craft brews for bar regulars to try until the beers' popularity demanded expansion.

"It's crazy to know were in the fifth year," Syed said. "We never planned on doing what we are doing. It started out as beer just for the Rose & Crown and has grown from there."

Five years down the line, and Palo Alto Brewing Co. boasts seven beers that are available both locally and beyond. The company recently started distributing limited supplies to the Central Coast, Tahoe and Central Valley. Syed said they're also sending their first beers to Europe in a couple weeks.

"Our plan for this year is to just keep brewing beers that people love and have fun doing it," Syed said.