Menlo Hub at 1029 El Camino Real in Menlo Park has closed, with the owner in major debt to the landlord.

Owner Mehmet Erkus said he was behind rent for about six months "due to slow business."

Landlord Jean Chen said Erkus' debt stretched back to 2012, but she wanted to give a "young guy" a chance. However, she said an eventual grand total of $150,000 in debt prompted her to file an unlawful detainer complaint in November of last year.

The Menlo Hub website, now down, posted a message in early 2014 that the restaurant would be closed for construction for the month of January. Erkus said he did this in the hopes that he and Chen would find a solution.

He said he had possible partners he wanted to bring in to help save the sinking ship, but Chen turned him down. He vacated the property on Jan. 13.

"She said she didn't want to work with me anymore," Erkus said. "Legally I am at default. She had the right to take over the restaurant."

What formerly opened as Oak City Bar & Grill six years ago morphed into Menlo Hub under Erkus in 2012, with a new name, look and feel. 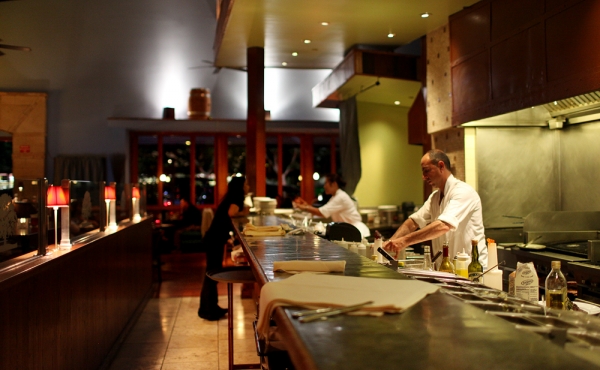 Above: A Friday night at Menlo Hub in June 2012. Photo by Michelle Le/The Almanac.

"I wanted to create a neighborhood place, a bar everyone could come to freely (with) a friendly atmosphere," Erkus said. "It didn't work out. I guess there's a difference with a single person trying to be everything, especially at a place this big. Menlo Hub requires a professional team and so many managers. I tried to do it by myself and unfortunately, (it was) not realistic."