This post is a Q&A with Howard Hoffman, president of Palo Alto Dog Owners, a grass-roots organization that he founded last year. 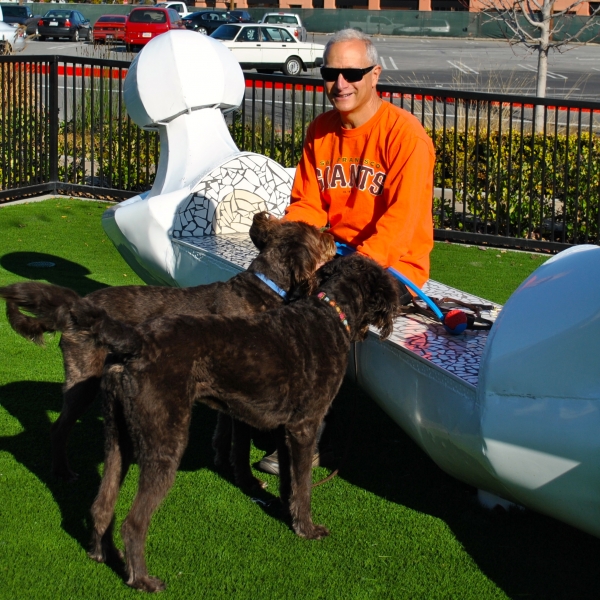 1. Would you tell us a little about yourself, and how you came to found Palo Alto Dog Owners?

I have been in Palo Alto most of the last 44 years, either working and/or living here. My wife and I have lived in Palo Alto since 1988. Our 3 children have played on many swings, slides, and other playground equipment all over Palo Alto. They all played AYSO soccer and I coached all 3 over a period of 8 years. All of our 3 kids swam competitively and I swam masters at Rinconada Pool. So, I got to know many of the parks of Palo Alto quite well and have a great appreciation for how heavily utilized they are and how important they are for the quality of life in Palo Alto.

About 4 years ago, the City of Palo Alto Animal Control and Parks Departments hosted a meeting to get input on dog parks in Palo Alto. Many dog owners, myself included, were frustrated by the lack of off-leash opportunities for dog recreation in and around Palo Alto. At that meeting, a member of the Parks and Recreation Commission mentioned that the dog owners of Palo Alto need to get organized. Since no one else bothered to get dog owners organized and since the city had made no improvements in the past 4 years, I decided to take the initiative. We created a website at PaloAltoDogs.org (not to be confused with PaloAltoDogs.com) and started signing up like-minded people, mostly dog-owners, but some non-dog-owners.

2. What neighborhood do you live in and what dog(s) do you have?

We live in Mid-Town South, not far from Hoover Park, which is our favorite park to take our dogs. We have 2 labradoodles, Franny (5) and Merlin (3).

3. Around how many members are there, and how can people sign up or get your news? Are there particular members doing anything we should be aware of?

We have almost 300 members. Anyone can sign up at Palo Alto Dog Owners or just send an email to info@PaloAltoDogs.org. Some members are happy with the type of small dog runs we already have (Mitchell, Hoover and Greer Parks). Others would like to see one or more larger dog parks. Some have been exercising their dogs off-leash in areas where it is not legal to do so and have received citations from Animal Control.

4. What did the organization accomplish in 2013, and what are its goals for 2014? What is your assessment of the politics to navigate?

Our biggest accomplishments in 2013 was (1) getting organized and (2) making our presence known to the city staff and the Parks & Recreation Commission. Our goal for 2014 is to get at least one new City of Palo Alto dog run or dog park approved and to maximize our input to the Parks Master Plan which is currently in development. Most Palo Altans, dog owners or not, realize that everyone would be better off if there were less illegal off-leash activity and more legal places for dog/owner recreation. It is very clear that if dog owners are not organized and not represented at the many park related meetings that we will continue to have poor facilities. We have seen dog recreation improvements happening in Mountain View and Menlo Park and we know that Palo Alto can and will do better. We are also aware that only 20% of the Midpeninsula Regional Open Space District (MROSD) preserves allow dogs (almost exclusively on-leash). By comparison, 80% of MROSD preserves allow horses. Also by comparison, most of the East Bay Regional Parks allow dogs, and most of those parks allow properly behaved/controlled dogs to go off-leash on most unpaved trails.

5. What about our dog parks? Why do you say our existing facilities are inadequate?

Let's start with the fact that there are only 3 and that there are none north of Oregon Expressway. Many Palo Altans go to Nealon Park in Menlo Park to exercise their dogs in a joint-use (baseball field most of the time) facility (only open Mon - Fri 8-10am). Each of the 3 dog runs in Palo Alto is deficient. Mitchell Park is the only one with grass. The grass area is small and gets worn out and has to be replanted each year (during which time there is no grass at all). When you throw a ball for a dog and it lands on the dirt, it gets disgusting in a hurry. The dog run at Hoover Park has a low fence, which some dogs can easily jump and depart the park. There is no grass. It is difficult to retrieve a ball or frisbee if it goes over the high fence, because then it is in the creek or on the creek bank (no easy access). The dog run at Greer Park is pathetically small. None of the parks has enough space to really exercise an active dog unless it is a very small dog. One only has to visit other cities, including Menlo Park and Mountain View and many other Bay Area cities to see some really nice dog parks or joint-use parks.

6. Explain the "time-share" concept that you speak of, and how it could work for our community. It seems this exists informally at some sites, as dog owners come out at dusk after the kids are done.

The "time-share" or "joint-use" concept is used at Nealon Park in Menlo Park. The baseball field is available for dogs only from 8-10 am Mon - Fri, when there are no baseball games. A paid professional "pooper-scooper" patrols the entire field after the dogs leave to make sure that there is no dog feces left on the field. Each dog owner is responsible for cleaning up after their own dog(s), but the paid "2nd line of defense" is important, as no one wants their kids playing baseball and sliding into dog poop. Time-share is being done informally now in Palo Alto, but it violates the leash law and subjects the owner to the possibility of rather expensive citations (more than $100 per dog per incident).

7. The conversation often seems to devolve to kids vs dogs: little kids being scared at parks by off-leash dogs, dog poop being left on school grounds. How do you address this in a constructive manner or reframe the conversation?

We do not want anyone scared by off-leash dogs, little kids or even adults. We do not support dog poop being left on school grounds, parks, or anywhere else. We support recreation for kids in our parks. We just feel that the city should take responsibility for providing adequate enclosed off-leash areas for dogs so that their owners will not be tempted to use school grounds or other illegal places. We feel that everyone would benefit by having more dog parks and a much higher degree of compliance with the leash law.

8. Sometimes the objection is that people don't really have their off-leash dog under control. Do you think there are some basic ground rules for off-leashing your dog?

Most dog parks, and that includes the regional park district facilities that allow off-leash dogs, have rules requiring owners to keep their dogs under control at all times. Dogs that are not properly socialized need to be muzzled or kept out of off-leash areas. Most dog owners take their responsibility very seriously. Most will give a courteous word or point of the finger when another owner's dog has pooped un-noticed by the owner. Most dog parks exclude females in heat. Dog owners must remain in the park with their dogs. Most dog parks limit the owner/walker to 2 or 3 dogs.

9. Where are good places for people to take their dogs off leash around Palo Alto? Nearby? Other recommendations?

Mountain View and Menlo Park have already been mentioned. MROSD has Pulgas Ridge in San Carlos which has a very limited but fun area for off-leash dogs. The rest of Pulgas Ridge is good for on-leash dogs. Arastradero Preserve and Windy Hill are other MROSD nearby preserves that allow dogs. The East Bay Regional Parks are great for dogs and so is Fort Funston in San Francisco.

It is going to take a lot of work and attendance at a lot of meetings, but we are confident that the City of Palo Alto will be improving dog recreation facilities in the near future. We have appreciated the positive reception that we have gotten from the City staff and from the Parks and Recreation Commission. We especially look forward to a Parks Master Plan with greatly enhanced opportunities for dogs and their owners. Thank you for inviting me to answer your questions, Cathy.

Thank you Howard, for your thoughtful approach to promoting responsible dog ownership here in Palo Alto, and for advocating for appropriate public areas for people to exercise and socialize their dogs.

Howard and I met for photos at the new dog park in Mountain View, which is located next to the Villages housing complex on San Antonio. It's not visible from the street, so it was a delightful surprise to be introduced to this pocket facility. It was done apparently as part of the public benefit associated with the development, along with pocket park areas for kids, etc. 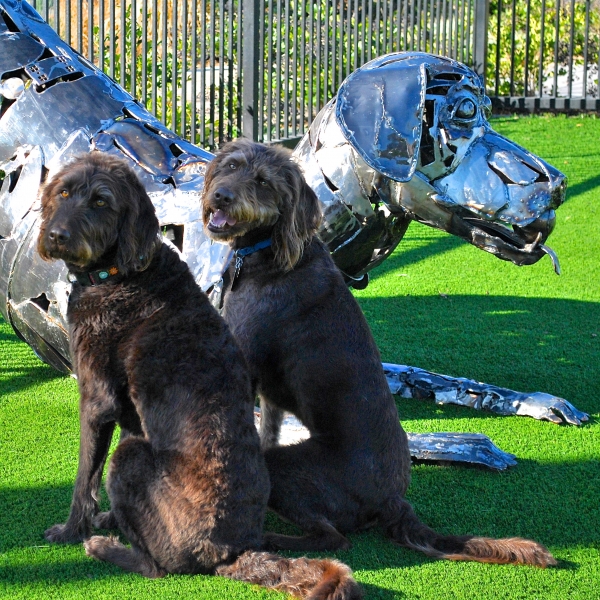 I've posted
more photos of the facility here; it has some really nice public art. I have to say Mountain View is way ahead of us on this, and I hope we can follow suit -- I'm wondering when our public benefits from development will be this nice. They also have an
off-leash training permit in Mountain View, so that you can train your dog off-leash in certain designated park areas. So I think there's a lot we can learn from what other communities are doing to foster responsible dog ownership, and thanks to Howard for leading this advocacy effort in our town.