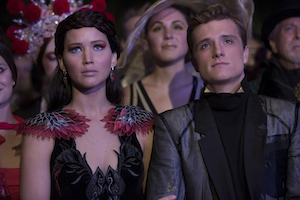 As most people know, Catching Fire is the second installment of The Hunger Games trilogy, but while the second novel sometimes feels phoned-in compared to the first book, the second movie far surpasses the quality of the first movie. Katniss Everdeen (Jennifer Lawrence) and Peeta Mellark (Josh Hutcherson) have won the games and returned home to District 12, but are forced to pretend to be a couple in love. Katniss is torn between Peeta and her childhood friend Gale (Liam Hemsworth) when President Snow (Donald Sutherland) shows up and tells her he's on to her deception. He tells her to "convince him" that she really is in love with Peeta.

When she and Peeta go to District 11, Katniss gives a heartfelt speech about Rue, her friend that died in the games of the first movie. An elderly man gives her a Mockingjay signal ? three fingers and a call. He gets shot. The meat of the story lies rebellion: in how Kat and the mockingjay pin she wears sow hope in the districts, hope that the totalitarian regime of Panem fights to destroy.

I went to Catching Fire with low expectations. One of my primary complaints about the first movie was that it failed to capture Katniss's interiority, which was a huge strength of the first book. Somehow, perhaps because of the lack of interiority, the first movie was performative: it seemed to be operating in real-life society the same way the Hunger Games did within their fictional universe, but without the book's searing critique.

Even though I enjoyed the books, I was worried about a run time of 146 minutes for a second novel. Catching Fire is arguably the weakest of the trilogy because it includes the Quarter Quell ? a version of the Hunger Games played every 25 years. The games that are so riveting in the first installment are a bit repetitive the second time around. However, the writers and director Francis Lawrence managed to stage something fairly stunning from Collins's prose ? a jungle full of terrors. The games are a bit lengthy in the novel, but are pared down to essentials in the movie.

To my surprise and pleasure, Catching Fire was very good. There are so many middle installments of trilogies that feel like filler or otherwise take a nosedive. For me that includes The Two Towers, Karate Kid II, Back to the Future II, The Matrix Reloaded, Halloween II, and Scream 2. Catching Fire doesn't follow these models. It's better than the first. It brings to the fore how a reluctant heroine starts to change how she sees herself and the choices she makes.

Recently, the Twitterverse got up in arms about writer Laura C. Mallonee's essay in The Millions. Although it has a provocative title, the essay is a thoughtful comparative analysis of popular YA heroines from earlier times (such as the ones in Little Women and Girl of the Limberlost), focusing on how they differ from YA heroines from today. Among other things, it questions why stories involving resilient girls don't attain blockbuster YA status today.

While I didn't agree with every point in Mallonee's essay, the response was a prime example of an audience that has developed such a strong infatuation with Katniss that it takes any criticism of The Hunger Games as misogyny or lack of familiarity with YA. I bring up the essay because it mentions Katniss's ambivalence with her role as a hero or celebrity, an ambivalence that many fans don't seem to believe exists. Kat doesn't think through her decision to take her sister's place in the first games (making it less a heroic decision and more a gut reaction) and she doesn't want to be a hero.

What the second movie articulates very well is the ambivalence that is glossed over by some readers. Katniss transforms from a girl who acts on impulse to save her sister and learns how to survive to a true heroine: someone who acts out of bravery in spite of the fear, rather than reacts purely out of impulse. The impulsiveness is still there, but it has more thought, more understanding behind it. I think in some ways, the movie spells out this transformation much more clearly than the book does.

President Snow comments at one point that the people of Panem who idolize Katniss don't realize she's just out for her own survival and he hopes to make them see that. I don't think it's a spoiler to say that Katniss foils his plan partly because she changes through the course of the movie - unlike the first movie, her growth as a character, rather than just the action of the games, propels the plot.

Even people who don't like the books will probably enjoy Jennifer Lawrence's performance as Katniss. She perfectly conveys Katniss's ambivalence. Lawrence was good in the first movie, but the dialogue was less sharp and one of the strengths of the books (her interior thought process) didn't come through in her acting. The writing has sharpened up with Catching Fire and Lawrence has truly blossomed as an actress. Her facial expressions and delivery evoke Katniss's internal struggles even when Katniss's prickly personality prevents her from stating what she's thinking. I can't wait for the third movie.

Have you seen or are you planning to see Catching Fire? Let me know what you think in the comments.